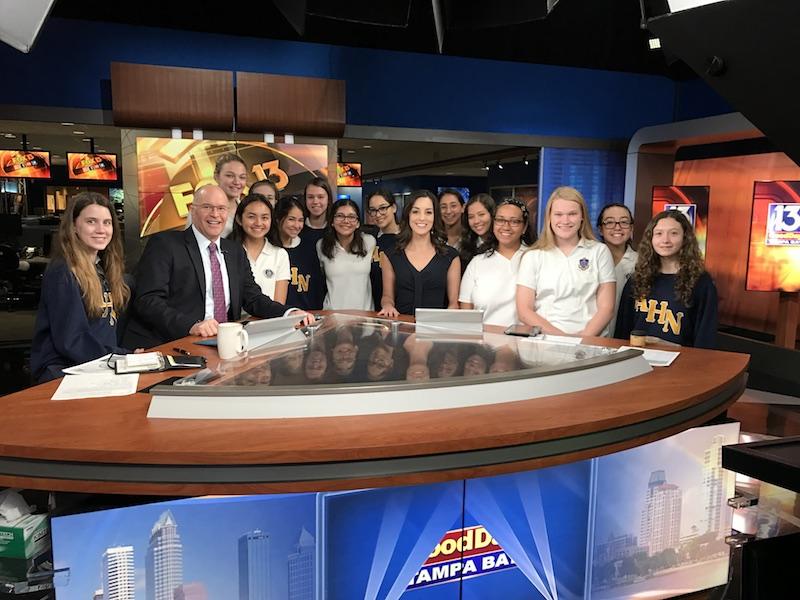 Staff members were able to meet some stars of Fox 13 including Kelly Ring, Walter Allen, Russell Rhodes, and Vanessa Ruffes.

On March 22, several Achona staff members made their way for a tour of Fox 13 News.  The staff took a trip to the station back in 2015, but unlike their first trip, anchor Kelly Ring showed Achona members the behind the scenes of the morning show.

After waiting in the green room, Ring greeted the staff members and took them back to the newsroom. As opposed to what is typically seen on TV, the stage is surrounded by over a dozen computers. In this office space, employees reach out to the Tampa Bay area on social media and research breaking news stories. One employee spoke briefly with the staff regarding how social media is the new future of journalism.

Sophomore staff member Isabella Thorpe says, “I believe social media is the new future of journalism because communication is the root that upholds journalism. With technologically advanced forms of social media, communicating ideas or opinions and accessing information has never been faster or easier, which benefits journalists everywhere.”

Being a journalist means coming up with story ideas, which isn’t always necessarily the simplest of tasks. While on set, the Achona staff learned the “old school” techniques Fox 13 uses. A key component to producing stories on the news channel is through social media tips. When locals from the county want to report something, they can head over to Fox 13’s Facebook, Instagram, or Twitter and message the station or one of the anchors.

Sophomore staff writer Juliana Ferrie says, “I thought that Fox News just got their story ideas from people who emailed in. I did not realize that they also listened to police scanners to find stories. “

After taking time to learn about how the news “happens,” and watching a live show, the staff members took a behind the scenes peek at the meteorologist center as well as where the show is produced and edited. Ring revealed that the SkyTower Radar is the most accurate weather radar in the area. Fox News spent millions of dollars on the high tech sources to give the area the most accurate weather reports possible.

In what Ring calls “mission control,” the producer and director sat working on the show. While the director worked camera angles, the producer made sure everything such as teleprompters and screen projection are running smoothly. Since the show is live, these two have a high stress job since they have control over what happens and when it happens.

Senior staff writer Olivia Stevens spoke highly of “mission control,” saying, “I thought it was amazing. The producer was on top of of everything and was clearly very accomplished in her role at Fox 13. They were all very relaxed. Even though there was so many things going on at once, they all worked as one, well-oiled machine.”

Throughout the tour, Ring continuously gave advice to students with an interest in journalism. She shared that, due to the rise of social media, broadcast journalism is slowly but surely fading away. She said, however, sports broadcasting is rapidly advancing since people want live statistics and information regarding athletics. For those seriously interested in pursuing a career in journalism, Fox 13 offers internships to college juniors. Though the internships are not paid, they count as a credit hour for school.

Senior and Features Editor Anna Padron says, “Going to Fox News was such a cool experience. I kind of imagined it to be similar to how it ended up being, but I never really imagined it to look exactly the way it did. It was so cool to see the news live while it was being reported. It was also very interesting to hear about some of the careers in journalism.”

Achona extends a special thank you to Kelly Ring and the team at Fox 13 for allowing them to learn and engage in real life news.