Generation Y Is Consumed By FOMO: Experiencing and Handling It 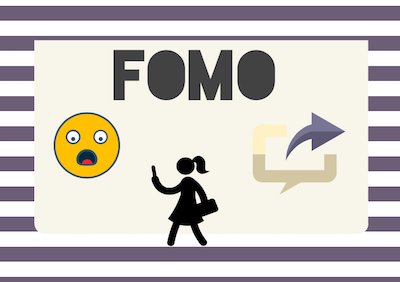 According to a survey on Mashable in 2013, 56% of people claim to have FOMO or some sort of discontent when missing events.

With the many technological advancements in the 21st century, people have access to various forms of social media which allow them to know what is going on throughout the world with the click of a button. However, parting with social media or switching off any aspect of life is likely to trigger the fear of missing out commonly referred to as FOMO. Experiencing this phenomenon causes uneasiness and intensifies anxiety as people fear they are missing out on opportunities.

FOMO derives from struggling to unplug from social media; this affects those plagued with overall life dissatisfaction. The impression of misusing time or not tackling enough tasks is perceived by those who encounter FOMO. People only worsen this feeling by hopping onto social media or by trying to achieve high life expectations based off of others’ personal accomplishments. As a result, jealousy and social comparison tend to occur.

Senior Jessica Zakhary says, “My FOMO is so bad because I feel like something good always happens if I miss going out with my friends, etc. Especially as a senior, I get FOMO for all of the events I’m not at school for. I also get FOMO sometimes with people that I wish I had the chance to get to know better before the end of senior year.”
Enduring FOMO in smaller sects of life is accepted as normal, but unhealthy. For example, becoming paranoid by spending the Friday night at home rather than going out is a sign of the FOMO “infection.” The FOMO that people undergo in these smaller sects of life can directly affect self-esteem when making important decisions. People may formulate extremely busy schedules because they fear they will miss out in recognition and attention.

Sophomore Meredith Hemmings has self-diagnosed herself with having FOMO. Hemmings applies her FOMO away from the social scene and, rather, uses it in her academic career.

Fortunately, this rollercoaster of emotions can be overcome. If one’s FOMO comes from the anxiety formed by social media, a digital detox is in need. By limiting social media usage, or by giving up phones for a few days, people learn to acquire a balanced life by dwelling in the present, rather than being desperate and spending days worrying about the happenings in others’ lives via Instagram, Snapchat, Twitter, Facebook, etc.

Aside from the social media detox, removing the FOMO that is developed in a professional or academic career is just as effective. A way to manage FOMO in this aspect is by organizing schedules with activities based on genuine interest, rather than adding on too many activities with a lack of passion.

Senior Laura Henry, says, “I honestly have the biggest FOMO ever, and it gets even worse when I check Snapchat after missing an event, such as  a concert, or when I am missing out on something that happens in the lounge when I’m not there.”

Contrary to FOMO, JOMO, the joy of missing out, is a new experience that is being embraced. People with JOMO tend to focus more on the joy of oneself rather than envying the pleasure of others, in a positive manner.

“I just want to sleep on Friday nights after a long school week to get refreshed for Saturday; I do not feel like I am missing out on anything,” says sophomore Miranda Liles.