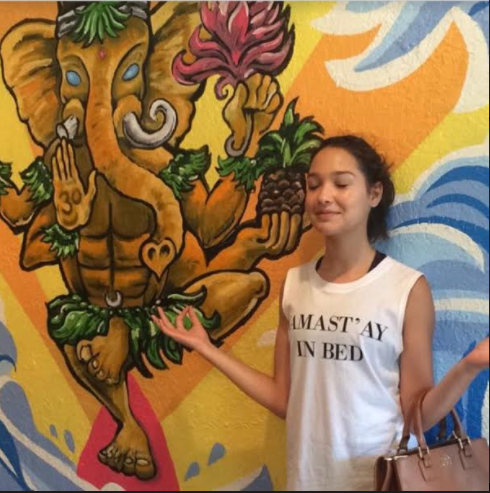 Meditation is a mind-calming source of relaxation that has existed for thousands of years- since the age of Buddha. Just five to ten minutes of meditation a day can help a person in so many ways from reducing stress to getting better zzz’s. Meditation may combat:

One of the leading reasons why people take up meditation is to give them a sense of calm to combat their stressful days.Overall, this practice makes a person more peaceful by grounding themselves in the present and happier.
A study was taken using highly stressed teachers who work with children facing severe behavioral problems. The teachers were treated with a new meditation program to ease their anxiety and within weeks the teachers showed less depression, less stress and overall had less “burn out” time than other teachers in the same field.

Theology teacher, Kim Wiley says, “Meditation actually changes the way the brain handles stress, which has been shown to cause health issues as you get older. Stress is different for everyone; such as test anxiety, bullying, and road rage.”

It increases a person’s levels of melatonin and enhances a person’s REM’s which are two crucial components to a satisfying night’s sleep.

In the instantaneous era from the realm of social media, many people have noticed deeply decreasing attention spans.

Because a person develops a more clear mind, they are able to set aside their other thoughts and therefore stay on task.

A 7-minute guided meditation to shift out of "doing" mode https://t.co/8A9cXKfJdF pic.twitter.com/CPt8fvKDPA

Leads to a Successful Life

It’s all a domino effect. As a person begins to see an increase in their productivity levels, most times they will find themselves to be more successful.

Cuomo says, “I feel like meditation has made a big difference in my life. It makes me feel better and because I feel better, I’m more happy, calm, spontaneous, and creative and I treat people better. I think I make better decisions. For about 15 years, I pretty much was a shoe-gazer on stage. I was very scared and would just look down. I wouldn’t connect with the audience at all–maybe it was a little boring for the audience. But recently I actually have been putting my guitar down, picking up a wireless microphone, running out into the crowd, looking people in the eyes, high-fiving them and really enjoying that connection. I don’t know if that would have happened if I wasn’t meditating. if I still had so much stage fright. I might still be in my shell.”

Talk show host, producer, and philanthropist, Oprah Winfrey is an avid meditator and uses it as a way to resolve constants thoughts such as “I should be doing _____.I am____”. It allows her to unplug from the world and focus on the present even for just a few moments.

Lastly, Winfrey says,“The outside world is constantly trying to convince you you’re not enough. But you don’t have to take the bait. Meditation helps you resist.”

From an intense yoga class to simple mindful breathing, the right type of meditation outlet may vary from person to person.

There are a variety of places to practice yoga. Any local YMCA offers a variety of group classes ranging from beginners to intermediates to advanced. In addition, there are private studios throughout the Tampa Bay area that offer Hot Yoga classes to burn maximum calories or that integrate pilates in their tradition classes.

Junior Sara Phillips says,“I go to Studio 108 in Westchase for yoga class – not specifically to meditate, but there is always meditation at the end of class. Their studio has a door in the back that they open to their garden, and it lets in a really nice breeze and sounds of birds chirping (I’m not making this up) during meditation.”

If yoga isn’t a preference, there are a multitude of youtube videos with calming meditations. In fact, Mrs. Wiley’s Christian Lifestyles and Sacraments classes engage in “Meditation Monday” as a way to “show a new way of handling stress in our busy lives.”

Wiley says,”We may not be worried about physical fights here at AHN, but we do face other stresses such as meeting deadlines, college applications and acceptances, family strife, etc.Taking time each day to settle your mind, relax your breathing, and focus your thoughts, helps you develop a stronger coping ability when faced with stressful situations.”

In addition, the iPhone/Android app Headspace is a five-star free app on the app store that gives rich meditation lessons from the convenience of a phone to improve daily mindfulness.