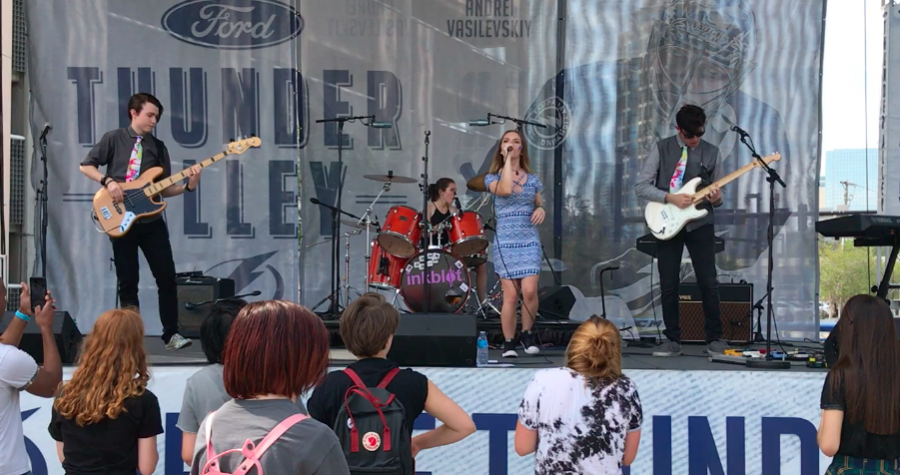 Inkblot got to perform at the Lightning game pre-show outside of Amalie Arena. photo credit: Darcy Dwyer (used with permission)

Junior Sydney Beil’s band, Inkblot, has been making a name for itself and recently performed at the Lightning game on Sunday, April 2. Taking all the opportunities they can to perform has allowed for their band to gain more exposure. Inkblot’s manager, Jim Chambers, was contacted for the gig on April 2 and they began preparing for their show.

Although the indie/alternative rock band has not yet had their big break of stardom, the members get paid for their performances and use that money to further develop their group, with either new equipment or recording studio time. Between their merchandise, Facebook, and Instagram page, Inkblot has created a fanbase outside of Academy. With Inkblot’s growing success, people all over Tampa come to watch them perform at the Crowbar or Gasparilla Music Festival.

“There were thousands of people who would just walk by or stayed for a little while before going into the game,” says Beil.

The majority of the songs are sung by Beil, and the group has now released three originals: “Fool’s Gold”, “Scarlet”, and “Jade”.

Inkblot covered songs from artists like The Pretty Reckless, 1975, Florence + the Machine, and more along with their own.

Beil says “We prepared for this a little differently than most gigs because we had to find songs that would attract a broader audience since people walk through Thunder Alley, we had to have something people knew.”