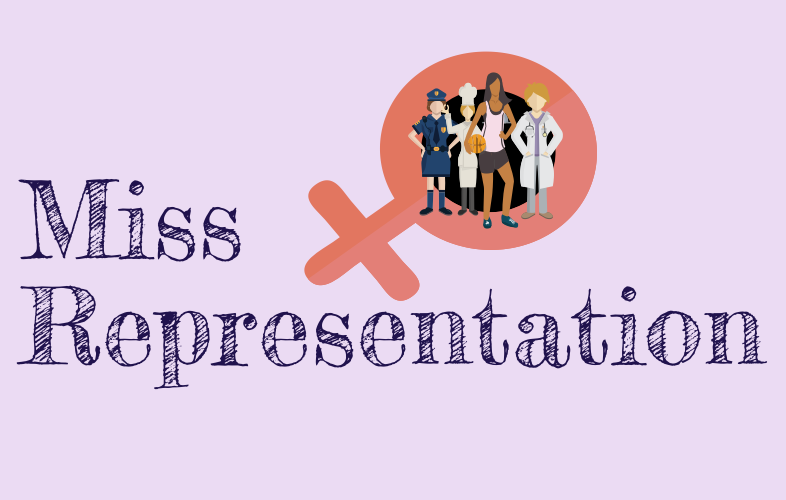 The “Miss Representation” documentary can be found on Netflix.

A few weeks ago, the women’s hockey team reminded America of the blatant inequality between men and women. The women’s hockey team threatened to boycott their own championship in their crusade for equal pay, which was prompted when it was revealed that the men’s hockey team makes significantly more. Being an all girls school, women’s issues have a large impact on the Academy community. At Academy, freshmen civics classes present a project regarding the misrepresentation of women in the media and how it impacts women everywhere.

Civics teacher Stacy Filocco played college sports and has experienced discrimination in the sports world. She does this project with her students every year.

Filocco says, “I think that it is eye-opening for students to realize the various ways that women are represented in the media and the impact that this has, not only on girls and how they view themselves but on all elements of our society and how they view women.  Much of this treatment is normalized in our society and therefore we take some the disadvantages that women encounter as the natural state of things when this does not have to be the case.”

The first step to this project is to watch the documentary, Miss Representation, in their respective civics classes. This documentary reveals how women are perceived in the media, which is typically depicted in a very stereotypical fashion where women are perceived as “ditzy” or “submissive.”. In addition, women are not often shown in positions of power, even though they do hold high positions. This documentary brings attention to the lack of representation that powerful women in the media get through interviews with a variety of powerful women like Jane Fonda and Rosario Dawson.

Freshman and civics student Caroline Lamoureux says, “I really enjoyed the diverse group of women they interviewed, from news reporters to CEOs to authors and movie stars. One of my favorite parts of the documentary was when they talked about the wage gap between the sexes and the discrimination that women faced in their fields. They interviewed Katie Couric for a long time about the adversity she faced as a female reporter. I think I’m going to write my paper about women in the workforce and how badly they are treated, dating back to World War II. I think the evolution of the treatment of women in 1940’s to today is a very interesting topic. I’m really glad that Academy decided to show us this documentary.”

After watching the documentary, students choose a preferred topic to write a research paper about. The topics primarily deal with stereotypes and inequalities that women are faced, but a handful of the girls’ papers deal with the stereotypes that men face. This project enables students to explore the contemporary topics that surround gender stereotypes while choosing an issue they are genuinely interested in.

Neal says, “Novak Djokovic thinks men deserve more pay than women because more stats show that more spectators come to men’s matches. Women in the WTA make less money that men in the ATP. Although prize money is equal at the four slams, in most smaller tournaments men get paid more.”

Female athletes break the stereotype of women being “girly” or “soft,” and as a result, they often receive less respect in the industry.

Being aware of the issue is only half of the battle, Filocco urges students to take action and change the way women are perceived in the media.

She says, “There are several things that students can do to support better representation of women in the media and in society as a whole.  One of the primary ways is through their spending.  The documentary states that 86% of purchasing power in the United States belongs to women.  That is huge.”

Thanks to you, thousands have tweeted @Amazon that they're #NotBuyingIt! Keep up the pressure by tweeting + sharing: https://t.co/ZlJkmMgFaA

Filocco continues saying, “Companies respond to dollars more than they respond to almost anything else.  So how can we spend our money to affect change?  One, support movies, tv shows, streaming series that show strong positive representations of women, are produced or directed by women, or feature issues important to women.  Two, support women-owned businesses, especially local businesses.  A majority of small businesses are owned by women so by shopping locally and supporting those businesses we are supporting economic growth for women.  Other great options for seeking out female owned businesses are Etsy and local craft markets. Three, support positive rhetoric about women by not engaging in negative conversations about other women’s appearances, relationships, or life choices. If you hear someone making those kinds of comments, remind them of the effect that it has.”