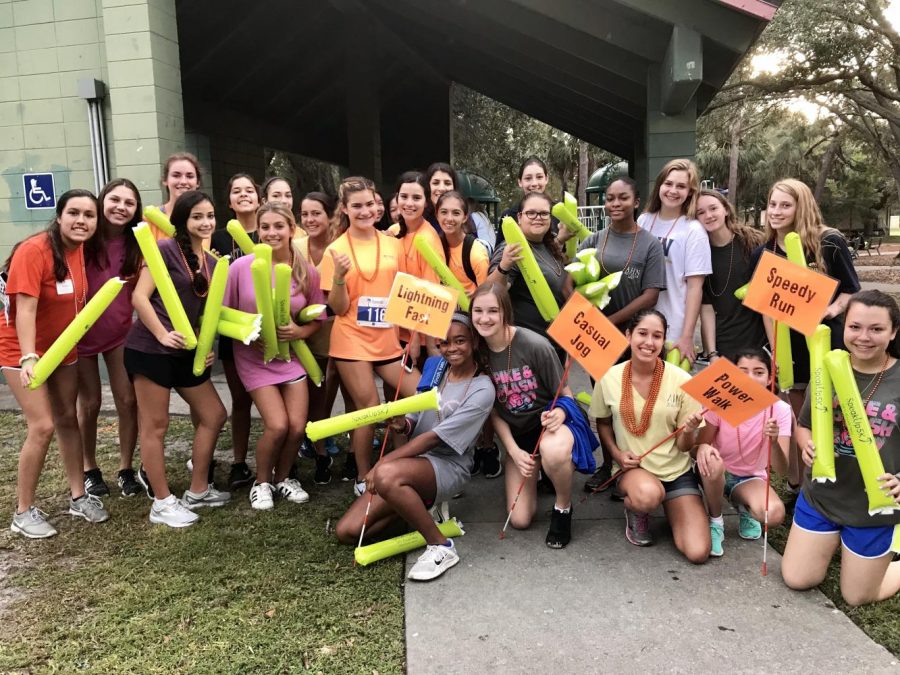 About 30 girls attended the event and did everything from running, blowing bubbles, and being cheerful with loud noise makers.

On Saturday, Oct. 7 the SpeakUp 5k took place at Al Lopez Park in West Tampa. The race started at 9 a.m., but Key Club volunteers arrived at the park as early as 6 a.m.

The SpeakUp 5k race series has occurred in two other locations: Richmond, VA and San Diego, CA. The purpose of the race is for families to come together and “Speak Up” for a positive cause, such as teenagers who are battling depression and anxiety.

Maddie Gallagher (‘20) began promoting the race in August. She and her father recruited 18 high school students from all over the Tampa Bay area to serve as ambassadors.

Although nervous about getting the word out to more than 400 girls, she hung posters around the school to attract students to the active fundraiser which aims to erase the negative stigma of mental illness.

“My cousin, Cameron’s, dream was to put on this 5k in their small town. Little did she realize that her dream would turn into something much larger than that. On Saturday, we had close to 750 people out at Al Lopez Park,” Gallagher says.

The race’s motto is Cameron Gallagher’s last words before finishing her half marathon, “Let’s Finish This!”

Cartwright (’19) says, “Participating in the Speak Up 5k was very inspiring. After volunteering, I felt so happy that I helped bring awareness to such a sad illness, such as depression.”

“When my dad first told me he was going to start the SpeakUp 5k Tampa, I looked at him like he was crazy. Every time I participate, it makes me realize how powerful Cameron was in her short 16 years of life as she is still inspiring those who struggle with depression and anxiety everyday, just as she did,” Gallagher says.

Gallagher said she is so happy with the turnout from AHN girls, “We had the most volunteers and runners, which has given me the confidence to promote it even more next year. It made me think about the sisterhood at Academy, a lot of your sisters are out there supporting one another through an amazing cause. I feel that depression and anxiety lacks strong voices behind the cause and needs to be spoken up about more often.”