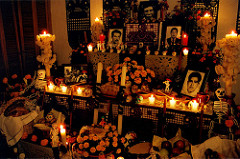 Even though Dia de los Muertos means “Day of the Dead”, the tradition is meant to be a celebration of life.

As Halloween rolls around once more and the typical humidity of Tampa mellows into the crisp air of fall, it’s only natural for one to blast their autumn Spotify playlists and bask in the taste of pumpkin spice lattes. However, the roots of the iconic American Halloween are as diverse as this nation itself.

The origins of Halloween can be traced back to the Celtic festival of Samhain which marked the end of the harvest season and the simultaneous beginning of winter which is the drearier, darker half of the year. This holiday was widely celebrated in the British Isles, France, and throughout Europe. During this time, the Celts also honored death and paid tribute to the deceased, believing that on Oct. 31, the spirits of the departed were able to walk on Earth once more. Thus, livestock and crops were left outside as offerings and bonfires were lit to combat the forthcoming darkness of the winter.

Citizens would often dress up as ghosts and spirits to confuse the ghosts into thinking they were one of them. In the 8th century, the Church attempted to eradicate this historically pagan holiday. Pope Gregory IV instituted All-Saints Day or All-Hallows Day. This day was strategically dated on Nov. 1 and was for the purpose of honoring the souls of all the deceased saints. Subsequently, it was adopted by the Celts and integrated with the previous customs, and Samhain was renamed All-Hallows Eve, eventually leading to its now famous name: Halloween.

This holiday was shipped across the Atlantic to America in the midst of the 19th century, when a potato famine forced its Irish celebrants to leave their homeland for their survival. Upon finding themselves in the melting pot that was the United States, their previous Hallows-eve rituals evolved, and large bonfires shrunk into Jack-o-Lanterns. Halloween is now the country’s second largest commercial holiday after Christmas, with Americans spending approximately $6 billion annually.

Around the globe, Halloween traditions exhibit vast contrasts and unique perspectives, all influenced by the varying cultures and historical events.

In Mexico and many other Latin American nations, the population celebrates “El Día de los Muertos” or “The Day of the Dead.” During this three day celebration,  the locals jubilantly commemorate deceased loved ones. The dead are believed to return to their homes on Halloween, where they are welcomed with food, drink, photographs, and flowers, set up by their families.

Along with these items, families typically leave out water and a towel for the spirits to cleanse themselves before they feast. Incense is burned to guide the dead in navigating their way back home as well. Lastly, relatives visit the gravesite and tend to any signs of disorder or breakage. On the last day, Nov. 2,  family members gather around the decorated burial place and picnic in order to celebrate the lives of their beloved.

Junior Greta Dieck stated that this holiday is especially relevant due to its impending date, which has been discussed in her AP Spanish class, “El Día de los Muertos is celebrated, primarily in Southern and Central America, as a way to honor the souls of those who have died. Families bake food, create shrines, and visit cemeteries to remember relatives who have passed away.”

CHINA
In China, Halloween is termed “Teng Chieh.”  The customs surrounding this occasion stem from the majority Buddhist population. Red lanterns are placed throughout the cities for the purpose of lighting the paths for the roaming spirits. Food and beverages are also placed before photographs of the deceased. Many Buddhist people construct “boats of the law” from paper to be burned in the evening, in order to remember the dead and to liberate and send the spirits of the “Pretas” to heaven.  The “Pretas” are the souls who died unfortunate deaths and so their bodies were never buried.

ITALY
The Italians consider “All Souls Day” as a religious occasion, and deceased loved ones are remembered and prayed for. On the island of Sardinia, residents have have celebrated Halloween for centuries by carving pumpkins, calling them “Concas de Mortu,” meaning “heads of the dead.”

PHILIPPINES
The Filipino people use the period from Oct. 31 through Nov. 2 to  recall departed family members and friends. Children participate in the ritual of “Pangangaluluwâ” in which they go door-to-door singing songs to receive sweets in return.

Clearly, the celebrations that embody the autumnal season are as fascinating and diverse as the inhabitants of this world. Whether one is identifying the essential origins of the holiday or exploring the varieties of ways it is celebrated, but one thing remains consistent, the importance of tradition. The necessity of maintaining specific customs and elements of history ensures the legacy of eternally alluring people.