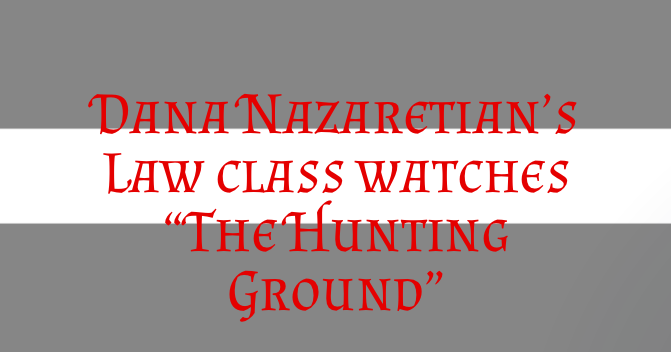 The Law class watched this documentary to be informed of the bad things that can happen on college campuses before leaving for college. (photo credit: Mia Lopez/ atone online)

Second semester Law class, led by Social Studies teacher, Dana Nazaretian, is currently watching a documentary called “The Hunting Ground”. The movie is about young women and men who share their stories of sexual assault in college.

Kelsie Killian (‘18) says, “I think the documentary is extremely important as we enter college because issues like sexual assault are definitely not something I have put much thought into and it really has opened my eyes to the reality of how easily it can happen and is something I will remember next year.”

This documentary is on Netflix and was made to bring about awareness of  the amount of sexual assaults that occur on  college campuses  and the slim repercussions that offenders face. According to the movie, more than 16% of women in college are sexually assaulted, and 88% of these victims do not report because of the blame placed on victims by college administrations.

Evan Greek (‘18) says, “The documentary so far has opened my eyes to how many sexual assaults occur on college campuses, especially on Ivy League campuses, and the lengths that these schools go to to cover it up.”

Megan Scanlan (‘19) says, “This documentary is important for young girls to watch  because I think it lets young teenagers be more aware of their surroundings and how common sexual assaults happen on college campuses.”

Tips that the students have learned on ways to handle sexual assaults include: