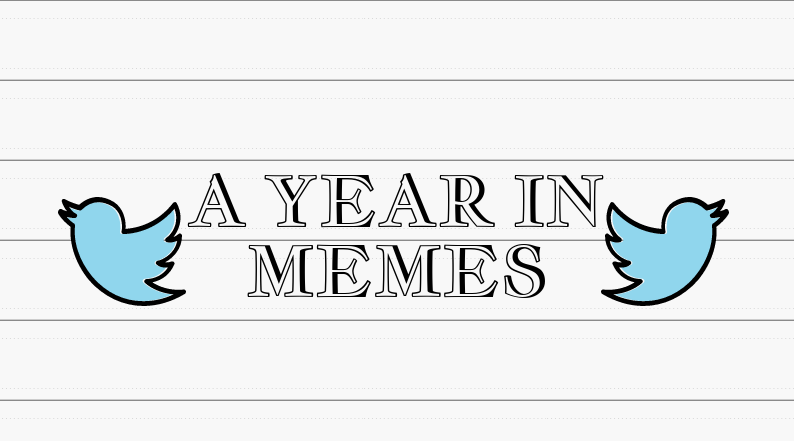 Mia Torres (’18) said, “I really enjoyed the Spongebob Squarepants Meme last year, it reminded me of my childhood being as I used to always watch the show when I was younger.”

Originating from Kayode Ewumi’s 2015 BBC TV Special, the “Roll Safe” meme became a popular source when users wanted to portray a smart idea. The meme focuses on one frame of the actor pointing knowingly at his own head, hinting that there is always a way out of bad decisions.

No one can hurt you if you detach yourself from everything and avoid becoming emotionally invested in anyone pic.twitter.com/VavUoE91YH

In February of 2017, a video of gamer, Drew Scanlon, reacting to one of his friends making a dumb joke turned into one of the most popular reaction GIFs on Twitter. While the video came out back in 2013, it wasn’t until last year that the infamous “blinking guy” GIF was born.

One of the most popular memes of 2017 originated from a screenshot of Meryl Streep cheering for Debbie Reynolds at the 2015 SAG Awards. Users used the picture of Meryl to help them finish a few lines of any popular song lyric.

The Killers: It started out with a kiss, how did it end up like this?

Making a playlist for a crush is a tradition that continues to grow with new generations. Last year, Twitter users figured out a new way to make a playlist in order to communicate with their crush. Users would combine songs to create a message for their crush using only the song’s titles.

made my crush a lil playlist 🤗💕 pic.twitter.com/VnGaEDa7RX

Screenshots from various episodes of the popular TV show Spongebob Squarepants, is a continuous trend on Twitter. Last year, the most trending Spongebob meme was “Mocking Spongebob.” This meme was used to insult anyone else by repeating what they just said, but by using a combination of lowercase and uppercase letters.

June: Nothing But Respect For MY President

In June of 2017, a Twitter user tweeted a picture of herself cleaning up President Trump’s star on the Hollywood Walk of Fame. She captioned the post “Stopped to clean @realDonaldTrump Hollywood Star. Nothing but respect for MY President.” Soon after, people began cleaning up popular Hollywood celebrities stars’ and posting the same caption.

stopped to clean @shrek 's hollywood star. nothing but respect for MY president pic.twitter.com/SGgZIe31kz

During the middle of July, the widespread trend of photoshopping images of Post Malone’s face onto various objects began. The majority of the photoshopped Malone faces are puns that play along with his stage name “Post.”

One of the most comedic memes of 2017 was the “Distracted Boyfriend.” The meme consists of a stock photo of a man looking at another woman while his girlfriend gives him an annoyed look.

September: Open For A Surprise

“Open For A Surprise” was an interactive Twitter meme in which the user would share a portrait-oriented photo with a hidden object that is only visible when a user clicks to enlarge the image. This trend was mostly used to reveal cute animals to lighten the mood on social media.

Leading up to Halloween, the meme of costume ideas for couples popularized. Twitter users would post pictures of popular internet duos with the caption “Couples Costume Idea.” One of the most popular source of inspiration for costumes was characters from old popular Vines.

With the arrival of the iPhone X in November of 2017, many iPhone users fell in love with the new feature, Animoji. Animoji is a way users of the X can bring popular Apple Emojis to life through the facial recognition feature. Animoji’s quickly became everyone’s new favorite way to create memes by making the characters sing popular songs.

December If You Play This Song On New Years Eve

One of the final memes of 2017 was the “If You Play This Song On New Year’s Eve” trend. Twitter users would include exact timecodes to specific songs so that if someone started a song at a specific time on New Year’s Eve, then a particular moment of the song would play the moment that 2018 began.