Things You Shouldn’t Say Out Loud 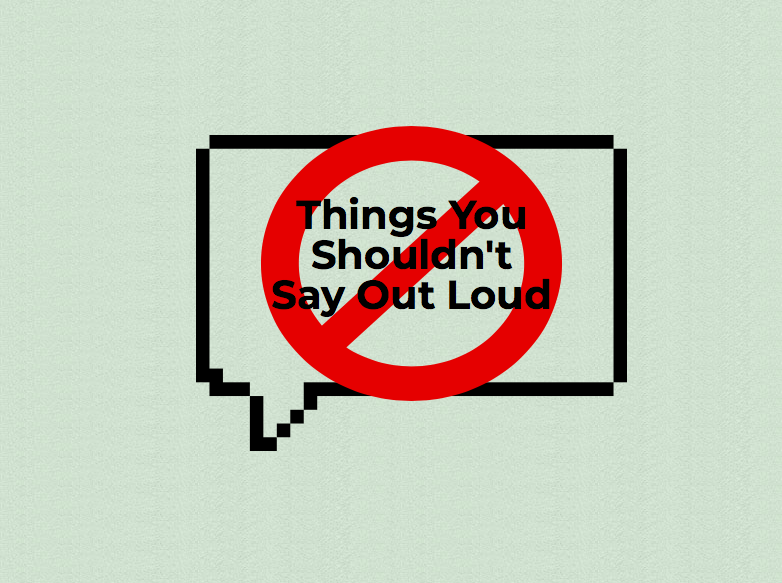 “I feel like people should be aware of what they’re saying because they don’t realize how much weight those words actually hold,” says Haven Todd (’20).

Some people can’t help but over share some information about personal experiences or in-the-moment feelings.

“I think it depends on where you are and who you’re with when you’re sharing this information before you can consider it inappropriate. I don’t think it’s polite to say certain things in certain settings,” says Dayzha Cartwright (’19).

Theology teacher Sister Mary Glavin has pointed out repeatedly in her Christian Lifestyle classes that students overuse the word “like” especially when it is not necessary.

“When people use the word “like” over and over again, they’re not getting to the point,” says Madison Sigler (‘21)

The word “retard” is taken from the disability of “mental retardation”. It has been brought to national attention through movements such as “Spread the word, to end the word” that using the word out of context can be offensive to those who have mental disabilities.

Madison Troy (‘19) says, “I think the word, when used incorrectly, is hurtful and ill advised. It puts down a group of people who oftentimes don’t have the means, opportunity, or platform to defend themselves. Although it is currently used frequently throughout the halls of AHN, it gladdens me to hear people stopping and correcting themselves, and I hope that soon the usage of the word will be obsolete.”

Situations like, for example, assuming that because a person is Hispanic or Latino that they are automatically from Mexico is culturally insensitive. In the same way, there is a difference between a person who is Black American and African American. Black American is more used for those who are ancestors of slaves but don’t necessarily have any association with Africa- origin wise.

Talia Sharreiff (’18) explains one reason why people should not say the “n-word” saying, “It’s like if you have a sibling and you guys call each other ‘stupid face’ when another person, who isn’t your sibling, calls your sibling ‘stupid face’ you’re going to be very mad because it’s your word that only you and you sibling say to each other. When an outside person uses a word that is only used within a specific group, it is offensive to those within that group.”

“When people use culturally insensitive language, they don’t understand what it’s like to be on the receiving end of that because they haven’t experienced that for themselves. Once people get to understand the weight that those words hold then I feel as though they would be more open and accepting to learning why they shouldn’t say certain things,” said Takkarri Mungin (’19).