Parks and Rec vs The Office: The Great Debate 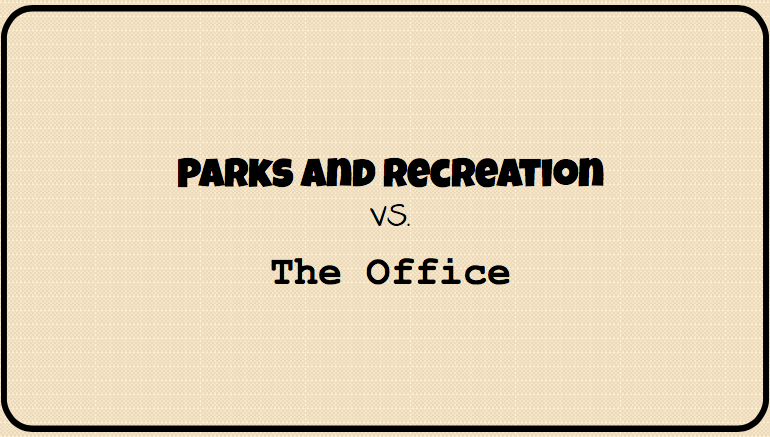 All seasons of Parks and Rec and The Office are currently available on Netflix.

“The Office”, a nine-season show, which stars Steve Carell as Michael Scott who is the regional manager of the Dunder Mifflin Paper Company in Scranton, Pennsylvania. There have been reports that “The Office” may get revived by NBC.

“Parks and Rec” was heavily criticized for it’s similar nature to “The Office”. Amy Poehler, who portrays Leslie Knope, has defended “Parks and Rec” saying “it’s just a completely different world in a similar style.”

The similarities in between the shows often spark a debate in which show is better.

Math teacher Anne Mikos Wynn (A’10) is slightly torn about the debate saying, “ I can efficiently reference both of them. I can reference “The Office” excessively to the point where it’s kind of sad. I do enjoy and get a kick out of “Parks and Rec”, I’ve watched that a couple of times. The Office is really my classic go to but I do enjoy myself some Leslie Knope.” Wynn adds, “Mrs. Lamm is the Leslie Knope to my Ann Perkins.”

Some Academy students believe that “Parks and Rec” tops “The Office”.

Caroline Lamoureux (‘20) says, “I think ‘Parks and Rec’ is better than ‘The Office’ because it got better as the seasons continued. I think the jokes are a lot funnier and more clever. The characters are more memorable and had better development over the course of its run.”

Jaed Seymour (‘18) says, “I tried watching the first episode of ‘The Office’ and I nearly fell asleep and had to turn it off. ‘Parks and Rec’ is the best because it is hilarious right off the bat.”

Others feel that ‘The Office’ is better than ‘Parks and Rec’.

“When I was younger, I always stayed up watching it so I guess I could say I grew up on it. ‘Parks and Rec’ isn’t that funny to me,” says Chanita Belcher (’19).

Reagan Finch (‘20) says, “I prefer ‘The Office’. I’ve seen ‘Parks and Rec’ and while it’s funny, the characters on ‘The Office’ kind of work together. They are very similar shows but I feel ‘The Office’ is funnier and has better character development.”