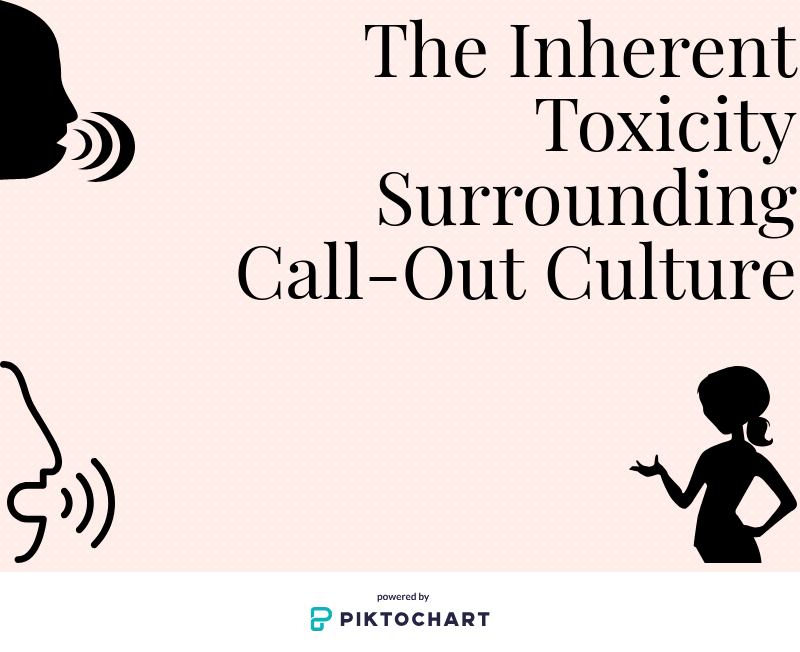 As a result of social media, “Call-Out Culture” started becoming a prevalent phenomenon around 2016.

In the highly technological and internet-driven world of today, the use of social media’s intrinsic communication abilities has become a convenient way for individuals to not only keep up to date with news on a minute by minute basis, but also to utilize a platform in which each person has a voice. However, due to the impersonal nature of these platforms, such as Twitter or Instagram, it can become incredibly easy for users to react in ways different from their personal interactions within their everyday lives. This disconnection is evident in the surfacing of an internet based phenomenon that has been coined “Call-Out Culture.”

Call-Out Culture has been defined as the “social phenomenon of publicly denouncing perceived racism, sexism, homophobia, transphobia, and other forms of bigotry.”  A description which in itself allows for an incredibly positive, progressive way of thinking for the changing values of the modern world. Despite the seemingly beneficial aspects of this concept, the problem which manifests within it, in direct response to its heavy social media standing, is the proclivity of individuals to abuse the privilege of speaking out. The platform which is most renowned for this particular behavior, and which many people associate with the idea of Call-Out Culture, is Twitter.

There are various terms which are commonly associated with this new social movement, which individuals often use in tandem with their arguments on social media. One of these is the term “problematic.” The connotation of the word in relation to Call-Out Culture very closely resembles its literal definition. An individual is penned “problematic” when they say or do things which go against this moral standing, which has been created by Call-Out Culture (i.e. making a comment which can be perceived as racist, sexist, homophobic, transphobic, bigoted) even if the circumstances happened to be as a result of a mistake or simple ignorance.

I’m starting to get really disenchanted with twitter activism. I feel like a lot of the call-out culture and labelling everyone as problematic ignores that even us activists are learning.

The encouragement of this line of thinking, as well as acting, often results in the tendency of individuals to participate in an overabundance of “calling-out,” often in response to even the slightest “problematic” infractions, which then leads to what is known as “cancelling.” Much like “problematic,” the term “cancelling” has received much popularity in regards to this movement of Call-Out Culture, and as such has made its way through the internet as newfound slang. The concept of “cancelling,” essentially, is the idea that once someone, usually of some level of fame, has displayed any signs of “problematic” tendencies, they should automatically be “cancelled” as a respectable individual.

Often times, these celebrities have previously been put on a pedestal because they have not yet done anything which can be perceived as “problematic,” so that when they are caught for this error, they fail to meet these unreasonable expectations which have been placed upon them. The inherent problem with this, of course, is that this way of thinking lacks any and all accounts for human error. The idea that these people cannot, and will not, make basic human mistakes simply because they are in the public eye is incomprehensible.

“I think this idea of Call-Out Culture is maybe a little regressive because it essentially is saying that once you’ve made a mistake there’s no chance for redemption or repentance for that.  It really characterizes cultural awareness as a very static concept, and that on one hand denigrates the individuals that are put down while simultaneously idolizing the individuals who are put up. The latter, especially, restricts these people from seeing themselves as available for growth and progression, and this over time will result in stagnation,” says Greta Dieck (‘19).

In the midst of the social media age, it can often be easy to forget the humanity and fallibility of celebrities due to the disconnect caused by the internet. However, allowing this misconception to persist encourages the idea that celebrities and public figures have no room to grow within their personal lives. In reality, everyone makes mistakes, and everyone is constantly evolving. No one person should be expected to remain perfect and faultless at all times because each individual experiences their own ignorance every now and then.

“I don’t think that celebrities should be expected to reach this inhuman standard of perfection at all times. I know that there have been times in my life where I’ve gotten into fights with my friends and said really mean or ignorant things, and I wouldn’t want to judged on those mistakes I’ve made in the past. I’ve obviously grown since I said some of those things, and I would never say them again now, but that was all a matter of committing the mistake in order to realize how I could improve,” said Brooke Kubiak (‘21).

Though this idea that an individual should be disregarded as soon as they say something that could be considered “problematic” creates an incredibly toxic environment in which people are not given room for growth, the mindset behind the movement does have its merits. Essentially, the concept behind what inevitably evolved into “Call-Out Culture” was to ensure that ignorance and bigotry does not go ignored amongst influencers as it may have in the past. This particular line of thought has many benefits, and at its core, it has the potential to prove valuable in a time when the ideals of society are rapidly changing and growing. What people need to be mindful of is when their well-intended “speaking out” becomes a hostile and disadvantageous “calling out,” which limits the intended beneficial impact of the concept as a whole.

Amelia Cuttle (‘21) says, “I think it’s important to make people understand that what they’re saying is wrong when it’s rooted in ignorance and bigotry. I don’t think it should end in the ruining of their lives or careers when it’s a simple mistake, but just to make sure that these things don’t happen again. In the past a lot of things got swept under the rug or ignored, and no one was held accountable for their actions so it’s good to see that people care now instead of keeping quiet.”