How to Avoid Cultural Appropriation on Halloween 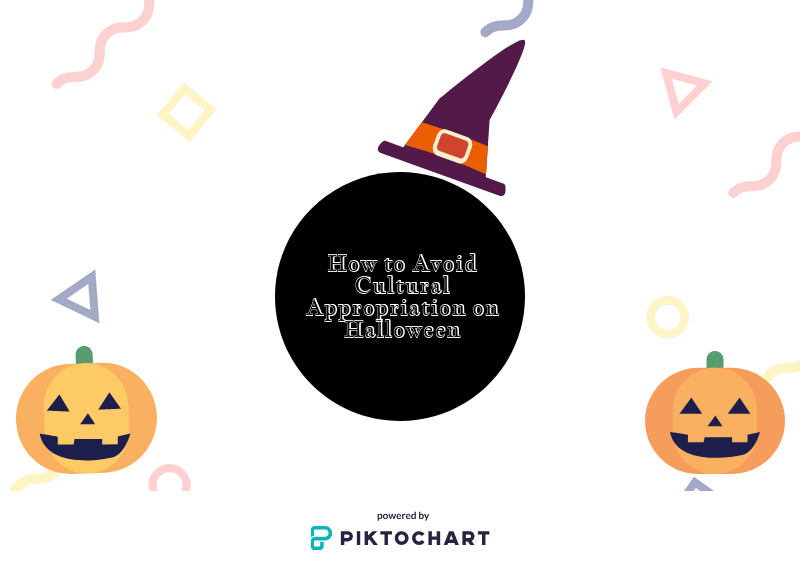 According to USA Today, Susan Scafidi, author of Who Owns Culture: Appropriation and Authenticity in American Law, said the debate really took off in 2015 when Yale warned its students not to wear certain costumes on Halloween, provoking what she claims was “a moment of outrage on both sides that really polarized the issue.”

Halloween costumes can range from scary to comical and they have taken on their own form of creative expression over the years. While dressing up for Halloween is meant to be something fun that people of all ages can do, it is important to be respectful when choosing a costume, especially in regards to people’s cultures. Over the years, certain cultural related costumes have become so normalized that some individuals may be ignorant to their inherent harmful nature. These costumes can range from “Geisha” costumes to heavily stereotyped Native American wear. Although some people do not believe the costumes to be offensive, others deem them to fall under the category of “cultural appropriation.”

Though the term was not added to its lexicon until last year, the Oxford Dictionary defines cultural appropriation as “the unacknowledged or inappropriate adoption of the customs, practices, ideas, etc. of one people or society by members of another and typically more dominant people or society”. The term, and the argument surrounding it, especially in regards to Halloween, is one that has been heavily politicized in the past few years due to the awareness which many minority groups, along with their allies, have brought to the attention of the public. There are many factors which come in to play within the controversy, and it is because of this that there is a grey area surrounding the phenomenon in which many individuals do not understand the complication with these kinds of costumes.

When it comes to cultural appropriation, very often individuals are not even aware that what they are doing is wrong or harmful, however it is because of this that staying informed is such an important issue today. The inherent problem with cultural appropriation has to do with using another person’s culture, when one has no true understanding or appreciation of it, for their own personal use in a way which trivializes not only that particular aspect of the culture, but the practice as a whole.

“The idea of cultural appropriation is that you are taking somebody else’s culture, and without any significant research or understanding of the meaning behind it, using it as, in this case, a costume. Essentially what you’re doing is commodifying somebody else’s culture. A lot of times the intent behind this isn’t to be mean or hurtful, but simply because these people may not understand the implications behind what they are doing.You can see this in people’s use of  religious garb as a costume, or even when others go as far as to dress up as another ethnicity, which is disrespectful to something that is meaningful to that person,” says History teacher and P.O.W.E.R. Club moderator, Stacy Filocco.

One example of a culturally appropriating costume which is very popular for people celebrating Halloween is the “Day of the Dead” costume.  In Mexican culture this celebration is not simply a “Mexican Halloween”, but instead it is a tradition which takes place over a few days in order to “demonstrate love and respect for deceased family members”. Considering the significance behind this holiday to individuals of Mexican heritage, the use of it as a “fun” Halloween costume essentially takes away the meaning behind the day.

“As a kid I didn’t really celebrate Halloween as much because of the emphasis that was placed on Día de los Muertos within my family, growing up Mexican. We still celebrate Halloween but it’s completely different with different meaning behind it. The holiday has a lot of significance to us because of what it represents in regards to family and friends who have passed, so seeing people “dress up” as it for Halloween is really discouraging,” says Dominique Deer (’19).

The line between what is right and wrong can be blurred, and so it is understandable that individuals may be confused on what they should or shouldn’t do when it comes to Halloween costumes. However, the main thing to keep in mind is simply to be respectful at all times with what is being worn. Stereotypes can be a very easy hole to fall into, and so everyone must constantly be asking themselves if perhaps what they are doing is too much.

Elizabeth Fuchsen (‘21) says, “I can see where it’s bad because obviously you shouldn’t mock anybody’s culture as it’s mean and offensive, but I also think it can go a little far sometimes. My confusion mainly has to do with little kids and dressing up as certain characters of different ethnicities like Moana or Pocahontas because they’re not doing it to be mocking or disrespectful, but just because they genuinely love and admire that character.”

There is an inherent disrespect which accompanies the use of other people’s cultures as a costume which individuals will dawn for one night, never gaining any real knowledge of its significance or meaning, while also providing an inaccurate depiction of that culture. It is because of this that it is important to stay aware of how your actions may affect another person, it can cause considerable offense to those being appropriated.

Brielle Gentile (‘19), “I don’t think that there has to be any big controversy over the issue because at the end of the day it’s just about human decency. How someone is raised and the environment they are raised in is specific to them and has nothing to with you, so deciding to dress up as someone else’s culture is uncalled for because you can not personally relate to what they may have gone through.”

In order to help individuals stay away from potentially offensive costumes this Halloween, P.O.W.E.R. Club teamed up with the Digital Media Club to create this informational video on the do’s and don’ts of the Halloween season, which was produced by Kathryn Kelly.