Why are People so Judgmental About Music Taste? 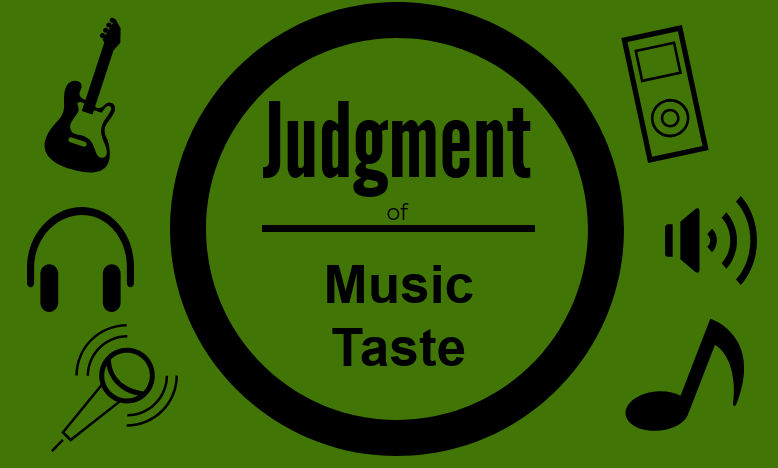 Signs of music have been around since 1000 CE, the creation of solfege.

Although music taste is a personal preference and largely subjective, teenagers and adults alike are either judged or judge others for the different musical preferences of others. Music taste can be an important element of a person’s personality, so why are people so quick to judge others on their music taste?

Robin Zander (’19) says, “I find myself to be the middle ground, because I understand that there’s this new industry of artists who utilize others writers and auto tune to make their mark. It’s frustrating for music lovers and other artists alike, because true success comes from the effort. However, it is really difficult to have the courage to come out with your own music. You’re basically putting your heart out on the line and asking for criticism. People who judge that are basically judging who you are. It’s a slippery slope, but I do find myself judgmental at times. If I hear your average three basic chords with the same five lyrics you hear in every radio track these days, it irritates me, because those are the musicians who get recognized in major ways. When’s the last time you heard about Tame Impala receiving anything at a major music awards show?”

Nancy Mizzell, Academy’s music teacher says, “I believe country and metal are judged the most. It is sad they are judged so often. Something others love should not be hated.”

Since music is considered an art, this means music preference is considered artistic preference. People are not largely judged on 2D/3D art preference, so why does society criticize music taste? Some theories bring to light the possibility that people are naturally stubborn and do not enjoy other music, simply because they are already attached to what they presently listen to.

Why are people so attached to certain music? One theory by Dr. Tomas Chamorro-Premuzic states people are more involved in music now than in past years. This is because technology has increased dramatically from the 1900’s, bringing society fast and easy downloads, accessible music videos, and free music. This expanding access has allowed people in the present generation to digest and appreciate more genres of music than those of previous years.

This faster and easier sharing of music can attribute to the rising apprehension of others’ music taste. For example, if a person mainly listens to indie and pop music, they may not be able to withstand continuous rock. It is now more common for individuals to like two to three genres, but become unable to tolerate music outside their preferred taste.

Another theory addressing music taste is that people prefer music based on our social identity. For example, if a person was to believe they are an intellectual, they may prefer jazz or classical music as opposed to trap music. If someone felt they do not conform to society, they would prefer rock or heavy metal. If a person considers themselves to “go with the flow,” they will, in turn, prefer country or indie music.

Lastly, music taste has the possibility of developing from parental figures or from listening to music when younger than the age of eight. If a parent preferred rock, the child will be more likely to listen to rock music later on in life. If a parent played classical music when their child was young, said child may listen to classical music. Since these music tastes can be related to past memories of childhood, listening to certain genres heard when a child can relax a person.

A recent study by Steve Janssen showcases the theory that the music a person listens to in their early adulthood will be the music they enjoy for life. He conducted a survey only to find middle aged people fondly are able to remember specific bands and songs from ages 16 to 21. The reasoning for this outcome is that people bond more with music in their late adolescence and early adulthood due to the simple fact it becomes more relatable. People fall in love, break up, start going to parties, and find their political views in this time, which highly influences song choice.

Recently, there has been a rise in indie music streams and sales. More artists and bands are deciding to perform and record as an independent artist than in the past. More people are listening to indie than ever before.

Sambit Chatterjee, a drummer for Ganesh Talkies, says, “Indie can be progressive metal, pop, rock, disco, pure metal, fusion, blues, or even a classical raag done your own way. Do whatever you want to. That’s the essence of independent music.”

When students from Academy were asked what genre of music they listen to, indie was the top response with pop following.

Summer Wolf (‘19) says, “I listen to indie because Billie Eilish is considered an indie artist. Her music is a lot different from what I used to listen to but I like it because it is so abstract.”

Chanita Belcher (‘19) says, “I feel judged by liking One Direction because they’re a boy band and all, but they’re my favorite, and I love their music, so there are  no regrets. Still waiting on their reunion tour 2020!”

This rise in judgement can contribute to the amount of time people spend discussing music.

Hannah Rodriguez (‘19) says, “I never enjoy talking about which music I like because I really only listen to country and pop music. If I say that people say I am too mainstream and that makes me sad.”

Take this quiz to find new songs to listen to: