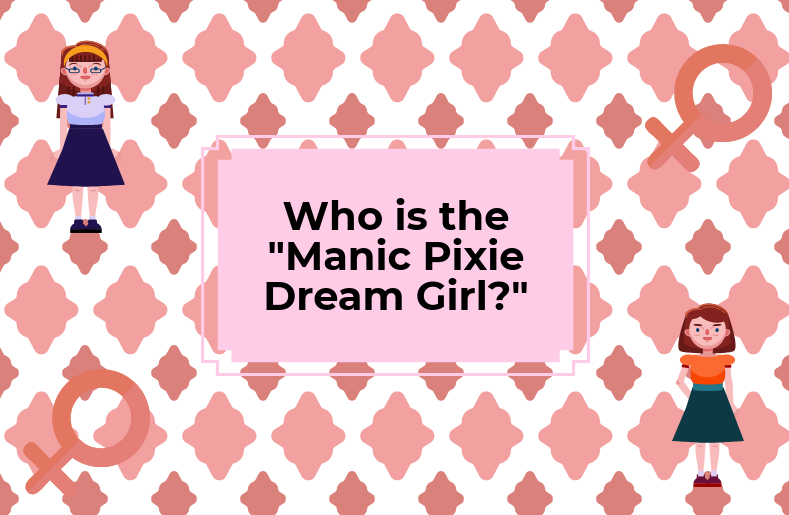 Many individuals actually criticize critics for labeling the female characters in movies such as “Eternal Sunshine of the Spotless Mind” and “500 Days of Summer” as being “Manic Pixie Dream Girls” due to the reality of depth in those characters. They believe that the term is being falsely utilize to take away the significance of these female characters. (Photo Credit: Adrianna Radice/Achona Online/Piktochart)

Many individuals actually criticize critics for labeling the female characters in movies such as “Eternal Sunshine of the Spotless Mind” and “500 Days of Summer” as being “Manic Pixie Dream Girls” due to the reality of depth in those characters. They believe that the term is being falsely utilize to take away the significance of these female characters.

Who is the “Manic Pixie Dream Girl”? (OPINION)

Throughout various forms of fiction, there are many character archetypes which seem to interweave themselves into popular culture. Especially from the women’s perspective, these archetypes prove to be plenty and unceasing, taking form in the various stereotypical forms of female characters which seem to plague movies, television shows, and the like. These archetypes can the most well-known include “Femme Fatale,” “Mighty Warrior,” “Damsel in Distress,” and even the “Gorgeous Geek” (a la “She’s All That” or “The Princess Diaries”). These female character archetypes are not new and will certainly remain prevalent in fiction for many years to come. However, there is one which seems to be discussed in various controversial terms, eliciting many passionate responses concerning what this particular archetype means for women and feminists everywhere, that being the idea of the renowned “Manic Pixie Dream Girl”.

The term “Manic Pixie Dream Girl” was coined by film critic Nathan Rabin after watching the movie Elizabethtown, he defined this phenomenon as being a fantasy figure who “exists solely in the fevered imaginations of sensitive writer-directors to teach broodingly soulful young men to embrace life and its infinite mysteries and adventures.” Since this development, there have been many fictional female characters who have been termed “Manic Pixie Dream Girl’s”. Some of the most famous of these being characters being Kirsten Dunst in “Elizabethtown,” Kate Hudson in “Almost Famous,” Cara Delevingne in “Paper Towns,” Zooey Deschanel in “500 Days of Summer”, and Natalie Portman in “Garden State”.

he was a depressed twenty-something male protagonist

can I make it anymore obvious

Each of these characters have been defined as “Manic Pixie Dream Girls” because of how they are perceived in relation to their male counterparts. For example, a character such as Cara Delevingne’s Margo, whose entire arc revolves around bringing out the adventure in Nat Woolf’s character Quentin, making her actual character arc void of any depth, thus her exemplification of the “Manic Pixie Dream Girl.”

Much controversy has been stirred up surrounding this term because of its inherent sexist nature. The concept behind this term trivializes many significant women roles to being nothing but objects from which the men in these scenarios benefit. And of course, with this, comes the subsequent affect in society, creating a personality which young women wish to embody.

Because of how this role has been romanticized in film, girls then get the idea that this is a desired way of life and how to interact with men. The inherent toxic nature of this lays in how it continues to perpetuate the idea that women’s lives should revolve around the men they acquaint themselves with. Instead, young girls should be encouraged to live out the ideal that they can write their own stories, on their own terms.

As girls are influenced by this archetype, men find themselves in the same predicament. By depicting women as these gateways for emotional maturity and “adventure”, young men are given the idea that this is the duty of women, to give a man’s life a sense of purpose. If men strive to turn the women they date into their own”manic pixie dream girl”, they start to take away that women’s independence and autonomy.

Not only is this archetype intrinsically sexist, there is also a level of romanticization of mental illness which accompanies this. Many of the women who are labeled “Manic Pixie Dream Girls” are also characterized by their mental health issues. Unfortunately, this contributes to the idea that depression along with other forms of mental illness are attractive qualities in women that prove to make them more “complicated” or “desirous” due to its unpredictability.

Robin-Sailor Zander (’19) said, “I think this concept is incredibly unfair and unhealthy.  I think of it this way, when we romanticize and make it somewhat “trendy” or “interesting” to have some sort of mental health issue, we perpetuate toxic and unhealthy relationships. When you’re consistently a factor in somebody else’s story or an obstacle they must get past mentally in character development, you start to think that your story doesn’t matter in the grand scheme of things. You start to believe that you cannot have your own story without being dependent on another male’s. I’m perfectly content with being the main character in my story, and I haven’t needed a man to center myself around for eighteen years now, and it’s been going just fine. Let’s stop acting as if our mental health issues are cool to have, just for a significant other to “fix”.”

I AM A PERSON WITH AN IDENTITY. I AM A MANIC PIXIE DREAM GIRL YOU WILL DUMP IN 2 MONTHS AFTER REALIZING MOVIES ARE FAKE AND DEPRESSION IS REAL AND YOU SHALL TREAT ME AS SUCH.

When Rabin coined this term, there was no telling the phenomenon that would spring up from such a label. Rabin himself has come out since exclaiming his regret for the term because of how it tends to be misused when talking about female characters and how it has become a sexist term itself.

Rabin said, “The trope of the Manic Pixie Dream Girl is a fundamentally sexist one, since it makes women seem less like autonomous, independent entities than appealing props to help mopey, sad white men self-actualize.”

One of the interesting aspects of this new-found archetype is the self awareness many young women have actually gained regarding the phenomenon. Since the coining of the term, more and more internet traction surrounding the label has erupted, involving many women online finding the hilarity and absurdity of the term and how unrealistic and toxic it really is, making it into its own meme of sorts.

“Thinking about this trope really reminds me of “13 Reasons Why” and the toxic concept behind it, making this girl’s story about the boy who was obsessed with her, while also kind or romanticizing this idea of suicide and depression and being “messed up.” I think that writers who utilize this archetype mean well, in the way that they are trying to bring in female characters who are characterized by being complicated and bringing light to the main male protagonist’s lives, but in practice they fail to correctly communicate a healthy message. They’re delivering this convoluted form of a feminist message that inevitably just ends being sexist in itself. No matter how dumb and boring a man might be, it shouldn’t be a flighty woman’s job to teach a man how to live his life,” says Georgia Ruffalo (’20).