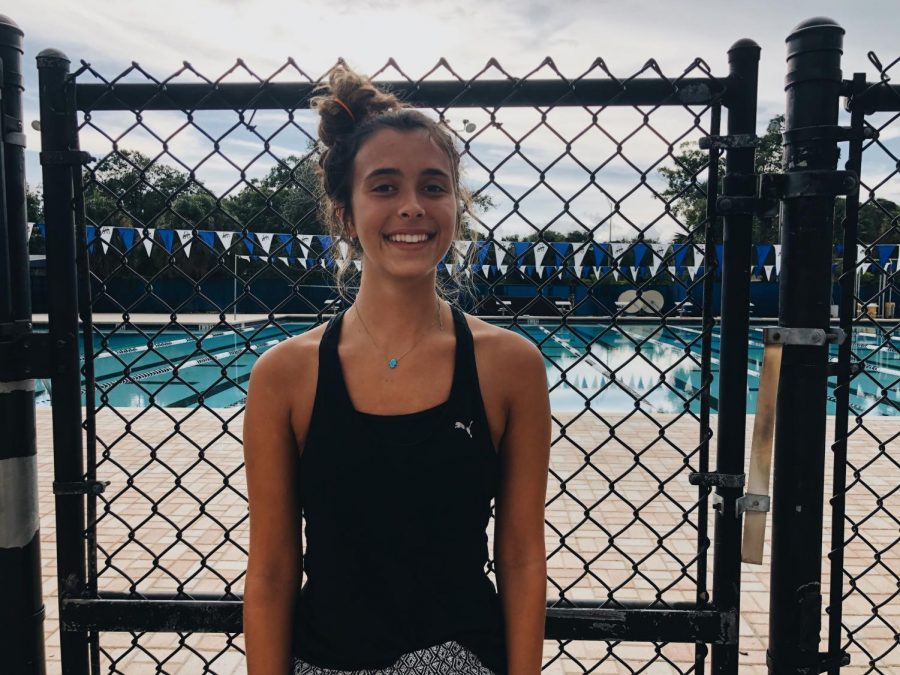 Tess Wadsworth (’20) has been on the swim team since freshman year.

Tess Wadsworth works for public trust over the summer

What would you do if you knew the economy and environment of your favorite place was in jeopardy? Tess Wadsworth (‘20) knew what she had to do: she spent her summer in Traverse City, Michigan, working with the organization FLOW to combat unethical pipe construction and maintain the value of the Great Lakes.

“I worked in Michigan at a place called FLOW, which stands for ‘For The Love Of Our Water’, for about six weeks at the end of summer,” said Wadsworth.

At FLOW, Wadsworth helped out around the offices while offering ideas for fundraisers. She also participated in events to help raise awareness for FLOW’s mission.

“I basically just incorporated some of my ideas to everybody at meetings and tried to raise as much awareness as possible for public trust, which is the main objective of FLOW. We wanted to shut down Pipeline Five,” Wadsworth said.

The company advocates for public trust and works to shut down “Pipeline Five”, which runs under Michigan’s Great Lake and could burst at any moment. The demolition of the Lake would result in the destruction of both the environment, by tainting the water and the ecosystems that live within, and the economy, by ruining the Lake and, therefore, affecting Michigan’s popular tourism industry.

“The pipeline is violating our rights because if the pipeline does burst, it will destroy the Great Lake, which connects to us, essentially taking away public trust,” said Wadsworth.

However, there are other components of public trust that FLOW strives to help. For example, the organization also works to fight fish farming and other corporations that put the water quality of the Lake at risk, such as Nestle.

“Right now the pipeline is the worst thing. But, since our main focus is public trust, there are also other things, such as fish farming, and the fact that Nestle takes water from our sixth Great Lake- which is underground so not many people know about it- but they (Nestle) have put really harsh chemicals in it,” Wadsworth said.

Despite all of the detrimental capitalistic corruption that Wadsworth witnessed while working for FLOW, she still viewed it as an extremely rewarding experience and looks forward to doing it again.

“It was super rewarding. I always go to the Great Lakes and I love to hang out there, and I realized that the Lakes are something that I really want to be able to conserve,” Wadsworth said.

Advocates of shutting down Pipeline Five have already outlined a plan for its demise in the hopes of moving forward with legal action. In order to get involved in a cause as worthy as this, you don’t need to travel to Michigan and protest- although that is an option. Your part in conserving the Lakes is as simple as spreading the word about the atrocities of Pipeline Five and raising as much awareness about FLOW as possible.

“I wanted to find a way to give back to the Lakes, because they give so much to me,” Wadsworth said happily.