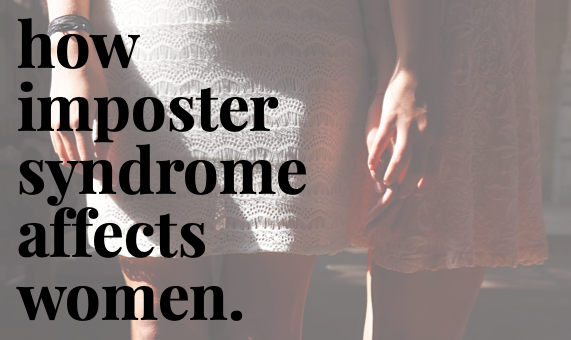 Imposter syndrome, according to the American Psychological Association, is a phenomenon that occurs among high achievers who struggle to internalize and accept their successes. The phenomenon was first illustrated by psychologists Suzanne Imes and Pauline Rose Clance in 1978. Those who suffer with imposter syndrome often contribute their successes to luck or other external factors rather than their own ability or skills; they are also plagued by a constant feeling of inadequacy and fear that someone might expose them as a fraud.

Typically, imposter feelings are accompanied by depression and anxiety. Imposter syndrome is not officially recognized in the Diagnostic and Statistical Manual of Mental Disorders, but psychologists acknowledge the phenomenon as a form of intellectual self-doubt than can have crippling effects on those who suffer with it. This phenomenon is prevalent among minority groups, especially women.

“Essentially, I feel that young women mask their gifts and talents because they tend to be perceived as being arrogant rather than being confident. They sometimes don’t know how to respond when given a compliment or praised for their intellectual or athletic skill. [Women] don’t want to be perceived as being overly confident, so they devalue those gifts and talents, which ends up looking like insecurity,” says Julie Omodio-Griess, Learning Resource Specialist.

It is a very common phenomenon among successful, talented women. Even respected actresses, politicians, authors, and scientists question whether they are qualified for their positions. For example, Meryl Streep — who has won four Academy Awards, nine Golden Globe Awards, and three Oscars — confessed she asks herself, “Why would anyone want to see me again in a movie? And I don’t know how to act anyway, so why am I doing this?”

Exclusive: Celebs get imposter syndrome, too. Michelle Pfeiffer opens up about her insecurities on set… yep, even now.https://t.co/PPZ2TeopTd

According to The Guardian, 66% of women have experienced imposter feelings within the last year. Women are more susceptible to imposter feelings due to lack of testosterone, which acts as a confidence hormone. The constant pressure to perform well and to maintain a perfect persona can cause women to experience imposter feelings when they succeed. This, combined with other societal pressures, causes more women than men to be affected by imposter syndrome.

“I definitely think it [imposter syndrome] really affects girls in our age group. From personal experience, I know it happens a lot with teenage girls. At my old school, the guys would be really confident in their abilities, and the girls would be unsure of themselves despite being really talented. Guys would be confident to give a wrong answer, and girls were unwilling to answer because they lacked the confidence,” says Jehanne Caudell (‘21).

Imposter syndrome can have very negative effects on women at home, in their workplace, and on their overall health. Female employees experiencing imposter syndrome report dissatisfaction with work and emotional exhaustion. Women struggling with imposter syndrome may obsess over meeting expectations, avoid extra responsibilities, and self-sabotage their endeavors.

Fortunately, there are ways to overcome imposter syndrome. Recognize and acknowledge feelings of inadequacy when they arise in order to address and solve them. Visualize and recognize your successes. Try to rewrite your thoughts to credit yourself. Instead of thinking “I only did well because I got lucky,” try to think “I did well because I put in the necessary effort.” Reframe failure as an opportunity for growth instead of beating yourself up. Lastly, be kind to yourself.

“When I work hard at things, I sometimes struggle to accept my achievements. I try to remind myself that I worked hard for those achievements, and that even though there is room to improve, I should be proud. In the end, acknowledging my successes helps motivate me to continue,” says Raquelle Elson (’23).