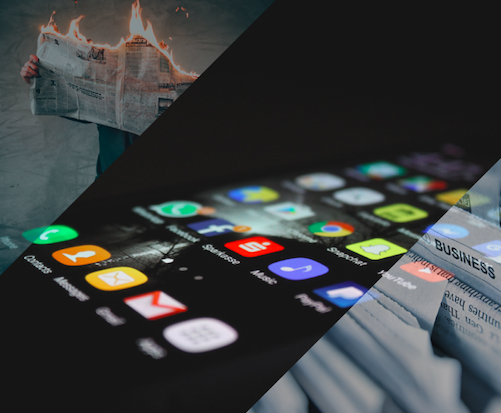 Several Academy students use the social media app Snapchat and, consequently, receive “news” updates from sources such as the “Daily Mail,” a source which is not credible. ((Photo Credit: Adriana James-Rodil/Piktochart/Achona Online))

Several Academy students use the social media app Snapchat and, consequently, receive “news” updates from sources such as the “Daily Mail,” a source which is not credible.

In this era dominated by social media and the creation of new technology and apps such as Twitter and Snapchat, many teenagers seem to lack knowledge of current events other than when Justin Bieber will “drop” his new album or where couple Camila Cabello and Shawn Mendes were last spotted.

Because of this, history and english teachers may fall short of having comprehensive, intelligent discussions in class because several students are unaware of what is occurring throughout the world and even in their own government. History teachers Dana Nazaretian and Lori Kearney said the majority of the time, out of 25 students, only one or two are aware of what is occurring in the world.

it's honestly sad how many teenagers don't know about current events and major things happening in the world right now..

“Very few know what is happening in the world when I ask them certain questions,” said Nazaretian.

Nevertheless, teachers try to incorporate discussions of current events in their curriculum in order to keep students educated and attempt to apply classroom concepts to the real world.

High School Social Studies Teacher Stacy Filocco teaches Advanced Placement Government and Politics (AP Gov.) as well as Global Studies. In both classes, she incorporates the discussion of current events in her classroom: “In AP Gov. we do a ‘Rabbit Hole’s Uncle’ which is kind of like a Rabbit Hole about about current events. It is a great way for students to inform their classmates about issues with some depth. In Global History, we still utilize the Week in Rap and try to discuss it on a weekly basis. Fortunately, both of my courses lend themselves well to applying classroom concepts to the real world, so I often find myself and my students making connections without having to go out of our way to do so.”

In addition, Filocco discussed the House of Representatives’ recent impeachment inquiry in her AP Gov. class.

Filocco said, “We have discussed the proceedings a bit. My impression is that students are aware of them but, like many, they are unclear on what an impeachment inquiry actually entails as well as what constitutes an impeachable offense.”

You should watch the news. You should not be getting your news from social media”

Although there is an absence of awareness of events pertaining to government, politics, or wars among students, many are up-to-date on the latest trends on social media apps, musical artists, and Youtube.

In 2018, Pew Research Center conducted a study and found that 45% of teens in the U.S. use the internet almost constantly, which is a significant increase from 2014-2015 (24%). Also, in September of 2017, CNBC reported that the Daily Beast released data that disclosed “Snapchat users spent an average of 34.5 minutes on the app in September.”

Morgan Perry (‘23) said, “I have spent seven hours and four minutes on Snapchat [so far] this week. Today was 22 minutes, but it will probably average three hours by the end of the night. I only go on Snapchat, and I go over to the news feed, and I watch all of that, and it kind of updates me on current events and what’s going on—celebrity and environmentally and politically wise. [This information] is from the ‘Daily Mail’ and stuff like that which are credible sources, and you can check them out on Safari.”

Perry, however, when asked if she knew about the House of Representatives’ recent impeachment inquiry said, “I don’t really follow politics, but I do environmentally and that kind of wise.”

Snapchat and Twitter are platforms where several students receive their “news” information. For instance, on Snapchat’s Discover page, they provide short videos from publications such as “People,” “Cosmopolitan” and, most notably, the “Daily Mail.” However, how credible are these sources?

The Guardian reported in January 2019 that Microsoft’s internet browser (Microsoft Edge) warns its users to distrust the “Daily Mail,” and a third-party startup called News Guard displays on the screens of “Daily Mail” visitors, who use Microsoft Edge, a message stating “this website generally fails to maintain basic standards of accuracy and accountability” and gave the publication a one out of five on credibility.

In addition, the Duke and Duchess of Sussex—Prince Harry and Meghan Markle —sued the “Daily Mail” on October 2, 2019, claiming “it unlawfully published one of her [Meghan’s] private letters” to her father.

Kearney said, “Using a credible source is super important. Actually, believe it or not, I find the better sources are not CNN or Fox. Your better sources are things like the BBC. They don’t have any ‘foot in the game’ so to speak. The bias is less.”

Students should take time to learn about what is occurring throughout the world and in the U.S. from credible sources, yet many simply state they are too busy to read or watch the news.

However, students can find at least 15 minutes a day to keep up with the news, whether that is in the car ride to school, after-school activities, or back home.

Podcasts. They are a great way to stay updated while driving or if you prefer to listen, rather than read, the news. The following are a few credible and short podcasts that give a run-down of domestic and worldly events.

BBC Minute – Each episode is a minute long and is “updated every half an hour, 24/7.” It covers several events in a minute, but the host speaks very quickly, so it could be hard to follow along.

Up First: NPR – Each episode is about ten minutes and are uploaded every weekday at 6 a.m.

The NPR Politics Podcast – Each episode ranges in time between 15 to 30 minutes.

Global News Podcast – Each episode is between 20-30 minutes long and is uploaded twice a day on weekdays and once on weekends.

NBC Nightly News with Lester Holt – Each episode is around 20 minutes and is uploaded on weekday evenings.

Achona: Beyond the Articles – This is Achona Online’s podcast, and topics vary from lifestyle, music, and news. Each episode is no less than 30 minutes.

Apple News App. Those with an apple device can download the Apple News app which constantly updates with articles from several publications. Articles are separated into categories such as “Top Stories” and “For You.” You can also enable notifications which alerts you with breaking news updates.

Subscribe to the Skimm. You can subscribe, for free, to the Daily Skimm email newsletter which gives a run-down of what is occurring throughout the world.

“I think that any newsletter that employs multiple news sources for daily updates is great because you get more breadth in your coverage. I like the Skimm as well as Numlock News and also Significant Digits by FiveThirtyEight for this reason. Daily newsletters are great because they bring the news even closer to you. I also like that they sort of give me a starting point for looking at other news sources in the morning; it helps me wade through some of the less pressing articles,” said Filocco.