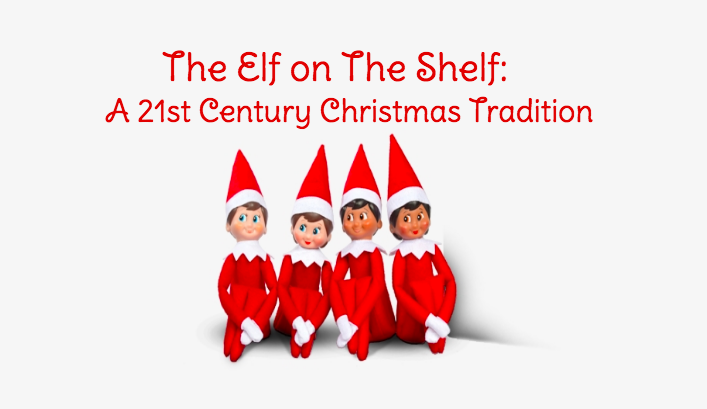 The Elf on the Shelf has become one of the world’s most loved Christmas traditions. Staring in 2005 as a children’s book, the story has come to life as it is now accompanied with a personal scout elf. ((Photo Credit: Georgia Ruffolo/Achona Online))

The Elf on the Shelf has become one of the world’s most loved Christmas traditions. Staring in 2005 as a children’s book, the story has come to life as it is now accompanied with a personal scout elf.

The Elf on the Shelf: A 21st Century Christmas Tradition

Tree decorating, cold weather, everything red, white and green; the Christmas season is finally here. Along with the classic festivities, a new tradition that is coming up on its 14-year anniversary continues to make it’s way into the homes of families everywhere. For the past two decades, the holiday season just isn’t complete without an Elf of the Shelf.

The Elf on the Shelf was introduced to the world as a children’s book in 2005 and was later turned into a holiday commodity when personalized “scout” elves began to be sold with the book to bring the magic to life. The story tells of elves who serve as “Santa’s eyes” during the days leading up to Christmas to ensure that children are on their best behavior. During this time, the elves report the children’s behavior back to Santa so he can create his naughty and nice list.

A post shared by The Elf on the Shelf (@elfontheshelf)

The reason for the Elf on the Shelf’s success, along with the idea of taking home one of Santa’s personal helpers, is the creative nature of the elves’s presence. As the story goes, the location of the elf changes everyday so that they can keep a better watch on the children from various areas of the house. With this change of scenery comes a bit of fun, as the elves can be seen performing tasks such as writing letters, leaving treats, making messes, and more mischievous and fun-filled behavior. However, there is a catch. The elves only move at night when the whole house is asleep to avoid being spotted and, the most important rule of all, can never be touched by humans as that would out them at risk of losing their magic.

Catherine Vande Brink (’20) said, “My favorite part of Christmas growing up was having the Elf on the Shelf in the house. Every day, my sister and I would wake up and immediately go searching for our elf who was always in a different part of the house. One time we found him hanging from our chandelier in the dining room and another time we found him in our play room with my sister’s barbie dolls. It’s definitely a tradition that I hold near and dear to my heart and I plan to sharing it with my children one day.”

What started as a family tradition has now become a global phenomenon with over 13 million scout elves in homes all over the world. The idea was born in the sixties with the Bell family when mother Carol Aebersold treated her two daughters, Christa and Chanda Bell, to the first and very own elf named Fisbee. “When we were children, our Scout Elf, Fisbee, would come to our home and look over our family each year. It really was a holiday tradition that our family enjoyed doing together.” said Christa Bell to Forbes. As the Bell sisters got older, they believed that their tradition needed to be shared with the rest of the world. To achieve this seemingly small goal of theirs, Christa, Chanda, and Carol all sat down over tea and began to write the book “The Elf on The Shelf: A Christmas Tradition”. Once finished, the search for a publisher was found to be their hardest obstacle, as they were turned away from every single one. Finally, the family took matters into their own hands and invested all of their money into starting their own publishing company named Creatively Classic Activities and Books.

“I am proud to say that we still maintain 100% family ownership today,” Bell said to Forbes.

A rather beneficial byproduct of the trinket’s “magic” is the lesson it can teach young children in regards to being kind, caring, and obedient during the holidays. There are not many parents who have criticized the “Elf on the Shelf” and have instead praised the creator of the story for helping them grow their kids in the spirit of Christmas, according to The Huffington Post. Some parents may argue that the elf may pose a threat to children, as misbehavior would result in a punishment (waking up to no presents on Christmas morning) and that kids should take it upon themselves to behave without in incentive. Although true in some respects, the forgiving and simple nature of the elf and its story allows the children to take full responsibility for their actions at home not for the approval from their parents, but for the approval from Santa’s little helper.

Stella Mele (’21) said, “I think that what Elf on the Shelf has accomplished not only as a family based company but also as a learning and bonding experience for families everywhere is absolutely amazing. Through the story and the scout elf, we can still hold the true meaning of Christmas close to heart and add a twist of fun for all.”