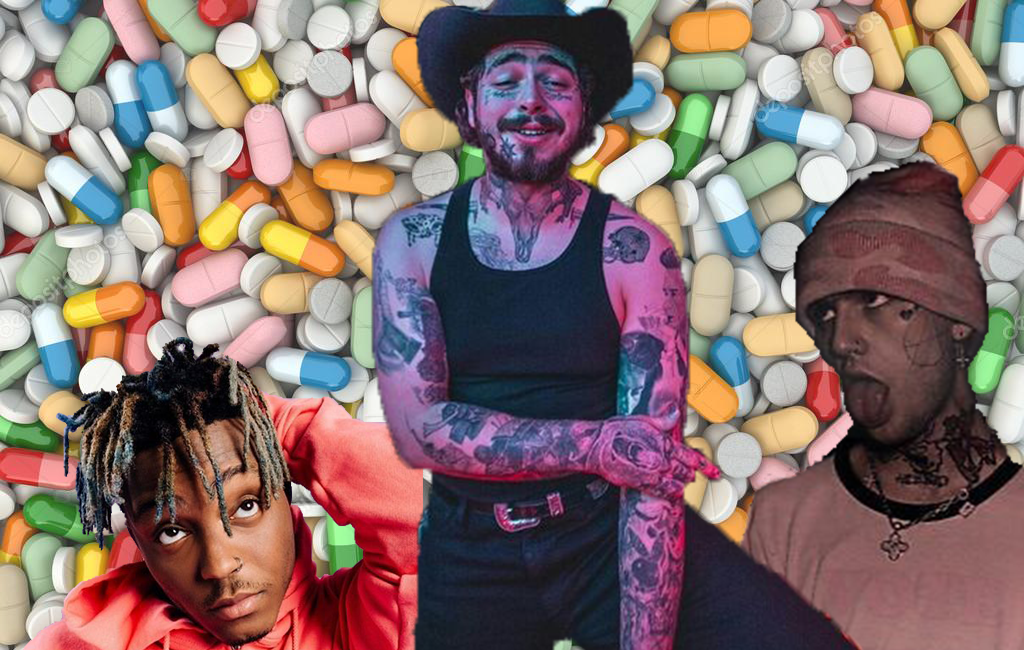 On the topic of Lil Peep and drug addiction, Senior Maria Garcia Gil said, “Lil Peep knows what it’s like to depend on drugs to cope with mental health issues, therefore I don’t think it’s fair to accuse him of glorifying them to an impressionable audience. It would be like accusing Taylor Swift of glorifying breakups in her song- she isn’t, she’s simply writing about what she knows.” (Photo Credits: Sydney Wills/Adobe Photoshop/Achona Online)

On the topic of Lil Peep and drug addiction, Senior Maria Garcia Gil said, “Lil Peep knows what it’s like to depend on drugs to cope with mental health issues, therefore I don’t think it’s fair to accuse him of glorifying them to an impressionable audience. It would be like accusing Taylor Swift of glorifying breakups in her song- she isn’t, she’s simply writing about what she knows.”

Glorification or a Cry For Help: Celebrities and Drug Culture

Throughout the last few weeks, many fans of rapper Post Malone have raised speculation about his health and mental state on social media, raising the question of whether he was on drugs. These online concerns are the result of concert footage of him floating around the internet in which Malone is acting very unusual, stumbling across the stage and speaking nonsense.

post malone has been acting strange and inebriated at his shows. ppl are fearing that this behavior is from drugs and alcohol. even if you don’t like post malone pls don’t cheer this on. he clearly needs help and ignoring it only leads to tragedies. remember amy winehouse. pic.twitter.com/8L428HzVQr

Carmen Harrell (‘20) saw these videos of Post Malone on TikTok and said, “They honestly made me feel really disturbed. I feel like with how many rappers have died due to drug abuse lately, this is something that people are rightfully concerned about.”

The speculation began to grow so widespread that he stopped a show in Memphis on March 6 to reassure fans of his health, saying, “I’m not on drugs and I feel the best I’ve ever felt in my life.”

However, this pattern of fans expressing concern towards celebrities and their drug use, and the celebrities feeding them reassurance has not always proved effective. It seems that as of recently, celebrity and rapper culture had intertwined itself with drug culture, and we hear of celebrity overdoses more and more everyday.

Tess Wadsworth (‘20) said, “I feel like lyrics in a song have a pretty big impact on the listener. For example when I hear someone rapping about doing drugs and glorifying them, it just makes me sad. I know that I have the knowledge of not to do drugs and why they’re bad and all that, but I know a lot of young adults may not- which can lead them down a bad path and prove ultimately detrimental to society.”

This past Dec. 8, beloved rapper Jarad Higgins, known as Juice Wrld, passed away of an accidental overdose due to prescription drug abuse. His longtime abuse of opioids was something that Juice Wrld had long glorified in his music, he even had an album dedicated to the topic called “Wrld on Drugs.”

Isabella Yepez (‘23) said, “I never listened to Juice Wrld’s music that much, but hearing about his death made me really sad because I’ve noticed how many young rappers have been dying of overdoses lately.”

Another prominent drug-related celebrity death was that of emo rapper Lil Peep, or Gustav Ahr, who passed away in November of 2017. His death seemed to be the first in a long chain of drug related celebrity deaths, specifically in a community of rappers who use drugs as a source of inspiration for their music.

Maria Garcia Gil (‘20), who had been a longtime listener of Peep’s music, said, “I think in today’s society everyone is very confused about the idea of the media glorifying drugs. For example, the popular show “Euphoria” was accused of glorifying drugs when in reality all it was, was that the scenes involving drug use were simply well filmed and aesthetically pleasing. Same goes with Lil Peep rapping about his drug use- he is not glorifying the use of drugs or trying to seem cool, instead he’s rapping about what he knows.”

A documentary dedicated to Peep’s life, “Everybody’s Everything,” was released in March of last year and details his long time battle with drug addiction, and ultimately how it consumed his life. The documentary details the various factors that played into Peep’s addictive tendencies, such as struggles with depression and the pressure of needing to please everyone around him. It also delves into his relationships with others, and how many people were aware of his drug addiction yet did nothing to help- some people were even there at the time of his death, continuing to party, unaware of the overdose occuring right in front of them.

Garcia Gil continued, saying, “Lil Peep knows what it’s like to depend on drugs to cope with mental health issues, therefore I don’t think it’s fair to accuse him of glorifying them to an impressionable audience. It would be like accusing Taylor Swift of glorifying breakups in her song- she isn’t, she’s simply writing about what she knows.”

While today’s glorification of celebrities has caused them to become cultural influencers, it is important to remember that they are vulnerable to the same things as us: substance abuse, mental health issues, etc. With such a surge in the number of drug related celebrity deaths, I think it’s important that, rather than establishing blame on rappers who talk about drugs, we acknowledge when an artist seems to be struggling with addiction and is in need of help themselves.