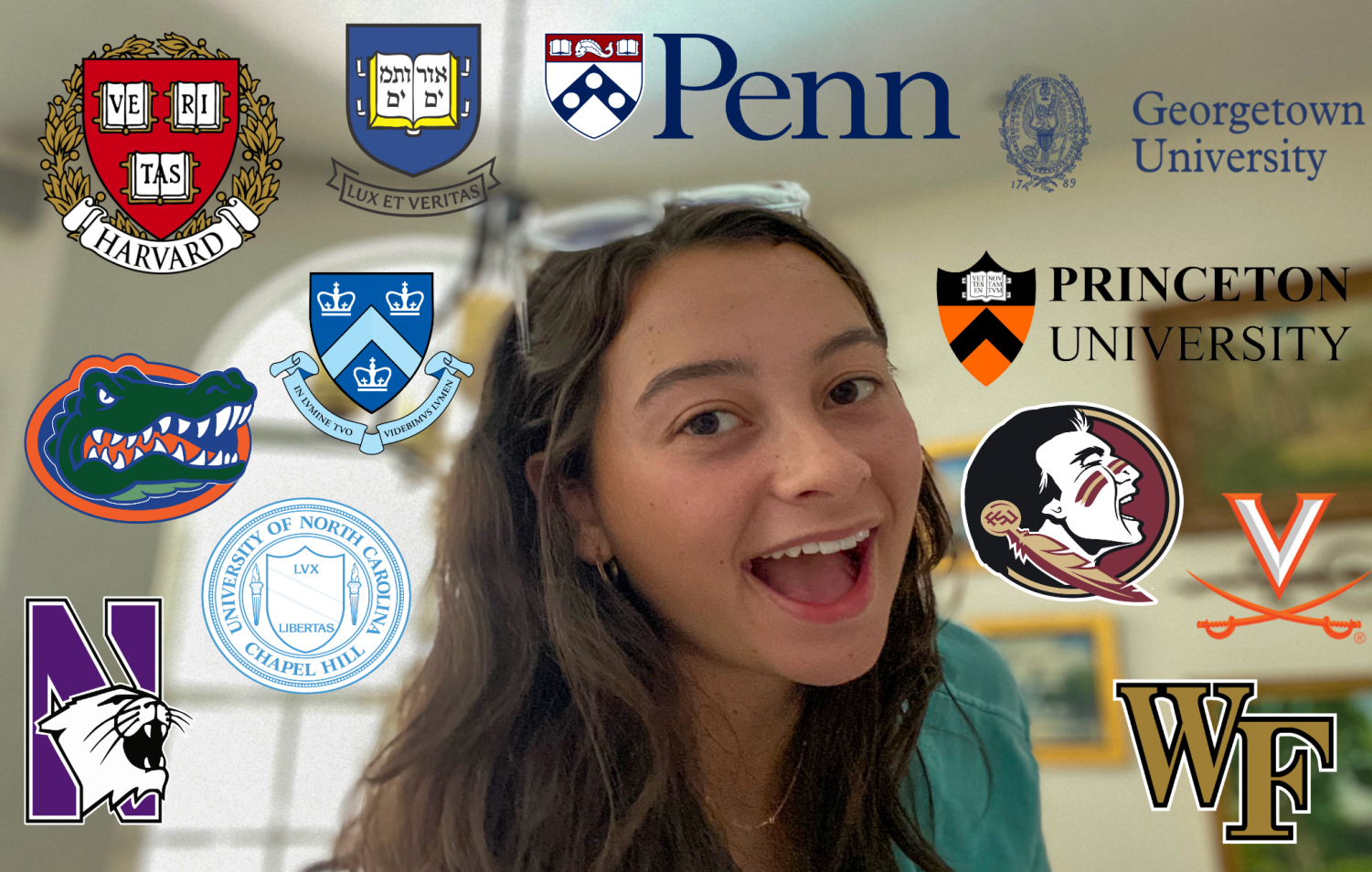 Danielle Fonsing (’21) explained why she enjoys watching these videos, “I personally watch them because I get scared and nervous about the college admissions process. Seeing so many other people go through it and hear back from colleges makes me feel better about the process overall and less stressed.” ((Photo Credit: Adriana James-Rodil/Achona Online/Piktochart))

Danielle Fonsing (’21) explained why she enjoys watching these videos, “I personally watch them because I get scared and nervous about the college admissions process. Seeing so many other people go through it and hear back from colleges makes me feel better about the process overall and less stressed.”

How College Decision Reaction Videos Do More Harm than Good

That is how the college decision process went for Rosie Eden, one of many who have posted their college decision reactions on YouTube. These videos serve as a sense of hope for students that maybe they too can be accepted into their “dream school,” but may also cause more harm than good.

With college admissions decision season coming to a close, YouTube is swarmed with videos like these with students being admitted to several schools, but like Eden, fail to give what would be called “stats,” such as their grades, standardized test scores, extracurricular activities, awards, and background — all things that play a significant factor in the selection process. As a result, without stating these facts thousands of viewers may have a false sense of hope and fall into the hole of comparison.

In addition, videos that showcase acceptances to highly selective schools are often the ones with thousands, if not millions, of views. College Counselor Kerry Keegan said, “Unfortunately, the most selective schools tend to get the most press, and, in reality, they truly only make up about 10% of all colleges and universities. While it’s emotionally healthy to celebrate all students’ accomplishments and admissions, too much emphasis is placed on highly selective schools resulting in students questioning the value of their own choices and successes.”

However, some videos such as Sam Brielle’s depict in a truly human way, with tears and disappointment, the harsh reality of the college selection process that is for many. Unlike others, she stated her “stats” at the beginning of the video which included her 5.1 weighted GPA, score of a 35 on the ACT, 7 Advanced Placement courses throughout high school, and her involvement in several extracurricular activities. Yet, even with this seemingly perfect profile, she fell into the large category that was either denied or waitlisted at very selective schools. Contrastingly to Eden, this is how the college decision process went for her.

watching college decision reactions on yt, i’m so nervous what if i don’t get accepted anywhere :(( and all the essays i have to write and my stats….

Junior Danielle Fonsing said, “I think these videos do negatively impact one’s view on getting accepted to selective schools because from the videos I have watched, many of these people do not get accepted into these colleges. These people are also great students with good grades and are highly involved in the community which makes it even more discouraging for viewers.”

In the video’s description, Brielle states, “I’m going to be honest – my video isn’t a fairytale like some of the other college decision reaction videos on Youtube. I even shed some tears in the video. I was debating cutting those parts out completely, but I wanted to give a raw representation of how I felt at those moments. The college application process was an emotional rollercoaster, just as the admission notification process was as well. Admittedly, my decisions were not what I hoped for, however, I am confident that everything happens for a reason and I will end up at a school that provides me with a great education and overall experience.”

The college admissions process truly is “an emotional rollercoaster” as Brielle describes even for straight A students. Although at times disheartening to watch as Brielle was rejected or waitlisted by her top three choices (USC, UCLA, and UPenn), her video helps rising seniors set realistic expectations for themselves when applying to college.

Not only do college decision reaction videos blur the line between reality and dreams, but they also encourage students to see highly selective schools as having more value than other institutions as reactions vary across schools thus devaluing other student’s acceptances.

Been binge watching college decision reaction videos on YouTube. Apparently everyone is getting into an Ivy league school.

Keegan emphasizes to her students that selectivity does not equate with worth. She said, “High selectivity does not mean that the school is a ‘better’ school. It simply means that the school receives a high percentage of applications and they can only accommodate or accept a small percentage of their applicants. Getting denied by a school is in no way a negative reflection of a student’s efforts or worth. Students who have carefully done their research and who have chosen schools that are a great match academically, socially, financially, and realistically in regards to their odds of admission are students who have successfully navigated the admission process.”

To combat the consequences that can result from viewing college decision reaction videos, students must simply approach the process with the mindset that “everything happens for a reason” and that it’s not where you go, but what you do when you get there, as my middle school English teacher wisely said so many years ago.

Senior Sydney Wills stated how watching these videos promote an unhealthy mindset. She said, “Seeing college decision videos always bothered me because, in my opinion, they kind of set an unrealistic/unhealthy mindset and standard when it comes to college. The people in the videos always seem like they live or die by that one decision and absolutely glorify the experience of getting into this one specific school. In reality, that isn’t a healthy way to be when it comes to the college process. I found that it’s so much better to keep your options open and not bank on one school entirely or compare yourself to people who have gotten into your dream school because everyone’s stories are different.”

All future endeavors are to be recognized and celebrated at this momentous time.”

When watching college decision reaction videos on Youtube, watch them hesitantly and with both a realistic and hopeful lens and vary the kinds of reactions from those that get accepted to their dream schools (with a low acceptance rate and a higher one) to those that get denial after denial. This makes for the realistic and optimistic part of a person’s mind to achieve balance and, therefore, enter the college decision process with a healthy mindset, so at the end of it, a person does not feel depleted, but content.

Lastly, viewing these videos are entertaining and a way to become excited about where one could possibly attend the next four years of their lives; however, when a person begins to compare themselves to the YouTuber, the consequence will solely hinder the viewer. Deter from doing so and remember that everyone is different and will end up where they are supposed to be.

“An ideal college search begins first and foremost with the student. She needs to take stock of herself: assessing strengths/weaknesses; personal goals and ambitions; asking what she would like to accomplish during her college career. After a period of genuine self-reflection (which is an evolving process), she will be better able to research colleges/universities that fit her needs and expectations, rather than choosing colleges based on familiarity, artificial rankings, reputation and/or popular “name schools”.

When choosing schools to apply to, I hope the list will reflect a vertical tier of selectivity: (good fit/target/reach) as well as schools a family can afford.

After creating such a list, the magic words I’d love to hear are: ‘I’d be happy to attend any one of these schools.'”