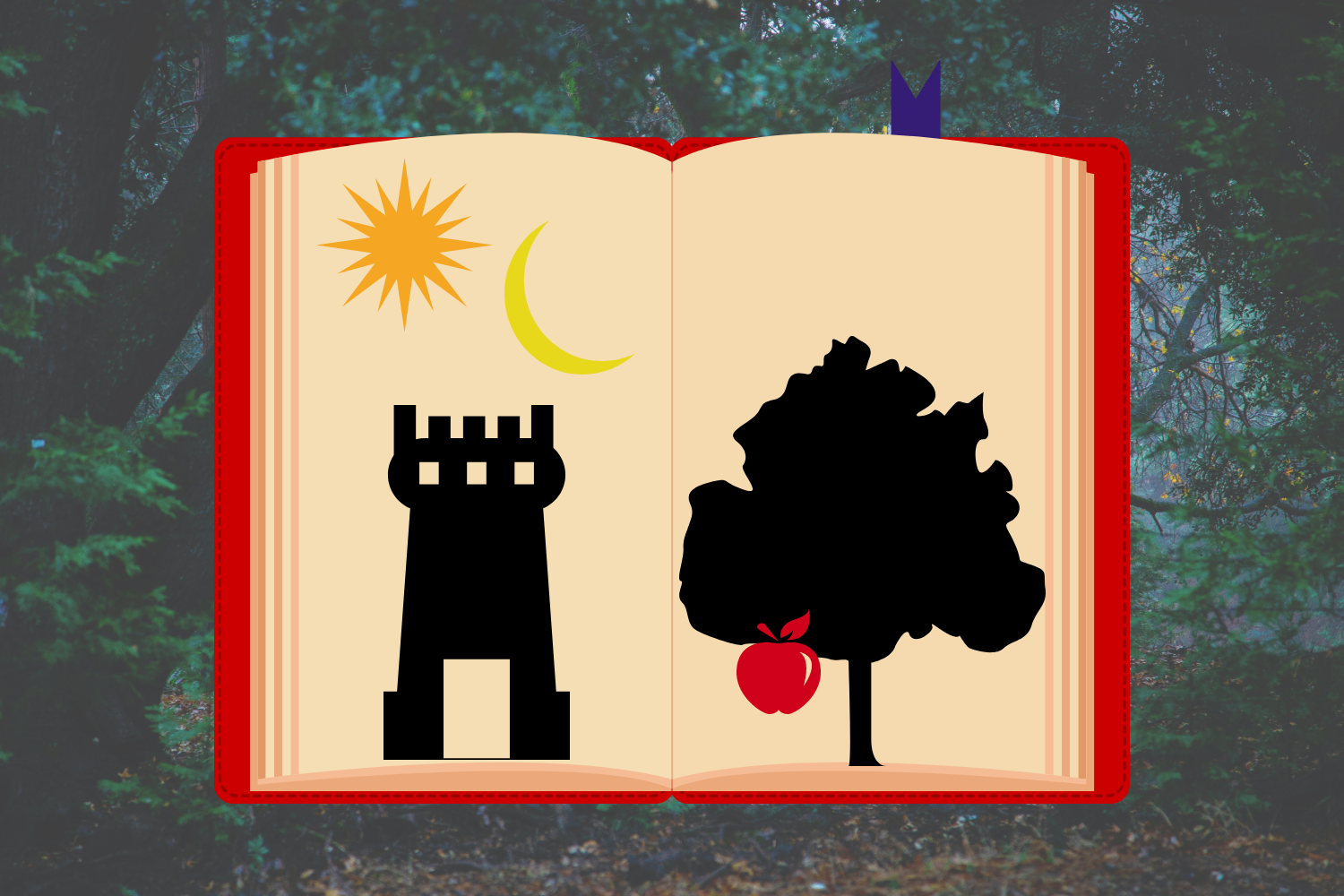 Jill Ledwon (’22) said, “I have heard of the original stories and thought they were a bit gruesome and went too far, but they show more of the real side of the happily ever after. Not sugar coating the real world.” (Photo Credit: Olivia Martinez/Achona Online/Piktochart)

Jill Ledwon (’22) said, “I have heard of the original stories and thought they were a bit gruesome and went too far, but they show more of the real side of the happily ever after. Not sugar coating the real world.”

Many Disney movies are based off of fairy tales written by Hans Christian Anderson, The Brothers Grimm, and others. The original stories are extremely different from the Disney movies and can be considered disturbing. These stories would not be appropriate for children today to read.

The queen, now satisfied believing Snow White is dead, asks her mirror once more who is the fairest in the land. When the mirror says Snow White, the queen tries to find new ways to kill her. The queen went to the dwarves’ house a total of three times to try to kill Snow White.

The first time she gives Snow White a corset and tightens it until she could not breathe. The dwarves found Snow White suffocating and loosened the corset. The second time, the queen gives Snow White a poisonous comb for her hair, and the dwarves remove it. The queen visits the dwarves’ house one last time with an apple. One side of the apple was poisonous, while the other was safe to eat. Snow White obviously did not trust the queen, so to prove to Snow White it was a “good” apple, she bit the safe side. Snow White then proceeds to bite into the poisonous apple and die. The queen was now happy that she killed a seven-year-old who was a threat to her beauty.

A post shared by The Fairytale of Snow White (@fairytale_snowwhite)

On the way to his palace, his servants accidentally drop Snow White’s coffin, dislodging the piece of apple in her throat. Snow White, still seven-years-old, and the prince get married. The stepmother learns that Snow White was alive and went to the wedding. When they see her arrive, they force the stepmother to wear iron slippers which they had heated over hot coals. Her punishment for killing Snow White was to dance to her death.

The magic mirror, the poisoned apple, the glass coffin, the evil Queen and the Seven Dwarfs are widely known across the world: they all are parts of the tale Snow White, first published by the Brothers Grimm in 1812.

In the Disney version, there are not as many differences between it and the original story. One of the most evident differences between the movie and the original story is Snow White’s age. In the movie, Snow White is fourteen, while in the story, she is seven-years-old, making her marriage to the prince an underage marriage. Another difference is that the Evil Queen attempted to kill Snow White three times instead of succeeding the first time. The prince and Snow White did not have such a lovely story as Disney told us. Instead of the prince finding Snow White and waking her with true love’s kiss, he bought her body and his servants dropped it. Due to the time period, it was most likely that the prince was already an adult who married a seven-year-old.

Emma Elder (‘21) said, “I have heard of the original stories, and I honestly think they’re really dark, but the intention of the original fairy tales was more to entertain adults than young children. I definitely like Snow White better because the ending is a lot less gruesome and uncomfortable. However, knowing the original story of Snow White makes it really interesting to watch Disney’s version of it because they paint a much lighter picture of the events in the story. The first time I read the original Snow White, I was really surprised to learn that Snow is only seven-years-old and she is already seeking marriage with a prince.”

Another story that varies dramatically from its Disney counterpart is Sleeping Beauty. The original story shares very few similarities to Disney’s version of the fairy tale.

The original Sleeping Beauty story was written by an Italian poet, Giambattista Basile, who was considered the Brothers Grimm of his time. The story entitled, “The Sun, the Moon, and Talia,” was published in 1634.

“I like the Sleeping Beauty better but it is a little more morbid than Snow White in my opinion. I like how classic it is, and honestly I just prefer the movie itself, with the fairies and the animals. I just don’t like the idea of living with 7 dwarves, and Sleeping Beauty doesn’t have that. I usually just tune out the original story because it is really gross and creepy, and I was a little surprised by how many old fairy tales are just as weird and gruesome,” said Delaney Ross (‘23).

The story begins with a princess named Talia, who is supposed to be a powerful ruler. The wise men of her father’s kingdom prophesize that she will die from a flax splinter. Her father decides to have all flax from the palace removed, but he never tells Talia what it could do to her.

Years go by, and Talia has grown up in the castle. One day, she sees an elderly woman spinning flax outside of her window. She convinces the woman to let her try, and she gets a flax splinter under her nail. When the flax splinter gets under her nail, she seems to die. Instead of having her buried, her father dresses her in the finest clothes and places her in a palace in the woods. They close up the palace and abandon it with her still inside.

One day, a king is on a hunting trip and his falcon enters the palace. He tries knocking, but no one answers, so he scales the wall. He begins to explore the palace to find his falcon when he stumbles upon Talia’s body. He attempts to wake Talia but is unsuccessful. He then rapes her, leaves the palace, and forgets about what he did. Talia is left pregnant, and she gives birth to twins who are cared for by fairies. The fairies would bring the babies up to Talia to feed, and one of the babies accidentally sucks on her finger, removing the splinter. Talia then awoke to find that she was a mother. She decides to name her twins Sun and Moon, because their origin was as mysterious as the sun’s and moon’s.

The king decides to come back one day to find Talia awake and with the twins. The king explains how she ended up pregnant, and Talia decides she is in love with the king. Even though he was coming back to rape her again. The king decides he was also in love with Talia, but he was already married. He goes back home, and in his sleep he says the names of Talia and the twins. His wife, the queen, heard him repeating these names in his sleep and became suspicious. The queen confronts the king’s secretary and threatens to kill him if he does not tell her what happened.

The queen orders that the twins be brought to her in the name of the king. When they arrive, she instructs the cook to cook the twins and feed them to the king. As the king is eating, the queen tells him that he is eating his own, but the king does not realize what she means. This is not enough for the queen, and she decides she needs to do something about Talia.

The queen orders that Talia be brought to her, because killing the babies and feeding them to her husband wasn’t enough. When Talia arrives, there is a fire in the courtyard, and the queen says she is going to burn her alive. Talia realizes she needs to buy time to find a way to save herself. She decides to ask the queen if she could take off her clothes before being burned. As she took her clothes off, she began to scream to call attention.

The king hears Talia screaming and goes over to help her. When he sees what is happening, he orders that the queen and the secretary be killed. The king also orders the cook to be killed, but the cook reveals that she had hidden the twins instead of cooking them. The cook was then offered a large reward for saving the twins. Now that the queen is dead, the king is able to marry Talia, the woman he raped and impregnated.

Sleeping Beauty has a lot of names. In the Italian version of the tale she is called Talia. Grimm preferred Briar Rose and Perrault named her daughter Aurore.

Here in Belgium she is known as 'Doornroosje' which would translate as 'thorn rose.'

Between the Disney version of Sleeping Beauty and the original story, there are barely any similarities. To begin, there was no sleeping curse; Talia was killed by a flax seed and then raped. There was no evil sorceress named Maleficent either. The villain is supposed to be the queen, but the villain can also be seen as the king. In the original story, the princess is named Talia, while Disney named her Aurora and Briar Rose. Another difference is that the king, who is a prince in the Disney version, is married when he falls in love with Talia.

The most noticeable differences between the Disney version and the original stories, is the illegal things the king and prince did. In the Disney version, true love kisses the princesses while these stories show their wakings as accidents. Princess Talia goes on to marry her rapist, while Snow White marries the man who bought her dead body to stare at.