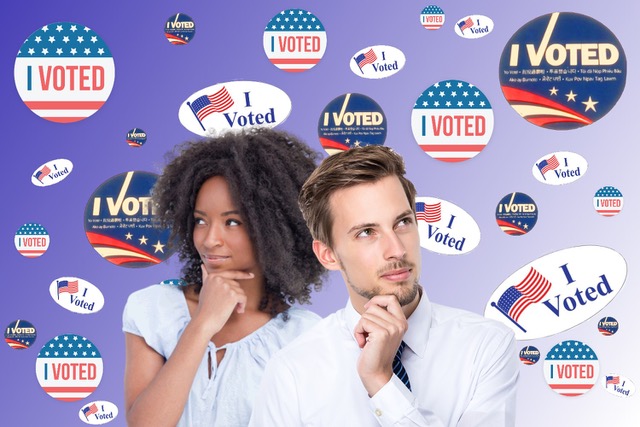 Younger Americans have taken political activism to new heights and are expected to vote in record numbers in the 2020 presidential election. ((Photo Credit: Asha Sneed/PicsArt/Achona Online))

Younger Americans have taken political activism to new heights and are expected to vote in record numbers in the 2020 presidential election.

Young Americans Don’t Vote, But Will they This Year?

Every election cycle is filled with some measure of unpredictability and outcomes that have voters and candidates shaking their heads in awe or disbelief. Nonetheless, there’s one phrase that many Americans feel is stable: “young Americans don’t vote.” With each new election cycle comes the expectation that there will be a dramatic spike in the amount of voters ages 18-29. However, voter turnout in this age group is usually lackluster.

Voting gives American citizens the chance to choose the people who will represent their interests and policy preferences, making participation in these elections crucial. With such a monumental decision comes the expectation that voters will jump at the chance to vote and make sure their voices are heard. Many Americans do, but many also refrain from participating in elections. In any particular election, as many as 60% of eligible voters don’t cast ballots. Younger Americans make up a significant portion of these nonvoting eligible voters.

I know exit polls are imprecise,

But we need to work w/ what we have now.

In 12 states with comp elections-

In the 2018 midterm elections, there was a spike in voter turnout overall, with the amount of young voters increasing 16 percentage points from the 2014 midterms. Despite this impressive increase, younger adults still trail behind older citizens when it comes to voter turnout. Now more than ever though, it’s important for young Americans to vote- especially as they begin to make up an increasingly larger portion of eligible voters.

“It’s very important for younger people to vote because we are the future generation. We need to exercise our political rights while also being able to make informed decisions,” said Elections student Isabella Ruano (‘21).

The 2020 election cycle has seen a wave of enthusiasm for voting and political activism in Generation Z and millennials. America’s younger and traditionally more tech-savvy generations have been able to drum up interest in coming and future elections by using social media and online communication to reach wide audiences.

Through the creation of social media and online spaces for interaction, young Americans are aiming to inform each other about the importance of voting. These spaces additionally serve as places for young eligible voters to share the policies and issues that matter most to them, which is also useful for candidates targeting younger demographic.

As important as creating enthusiasm is, though, the most important action happens at the polls, where large numbers of younger voters tend not to show up. Even as recently as the 2020 primaries, youth voter turnout was not as high as expected. This result does not necessarily mean younger Americans will not vote on Nov. 3. However, it does stress the importance of the youth vote, which has the power to shape the coming election. Younger Americans tend to be more vocal about the issues they support, with hot topics being healthcare, racial equality, and environmental protection. In order to have a more prominent voice in the government, though, they need to vote.

“In this election, young voters will help to determine our future as a country. This is the most important election of our lives. The results will determine crucial things like healthcare coverage for all Americans, environmental protection, economic recovery, and progress towards racial equity,” said AP Government student Stephanie Oehler (‘21).

In our democratic system, voting is crucial, and it is commonly recognized as every American’s civic duty. It’s one of the most impactful actions individuals can make for themselves and their communities. Americans have the power to control the government and shape the direction of the country, both locally and nationally. For younger Americans, this power is steadily growing. In taking advantage of their ability to vote, young adults ensure that their voices are heard and their needs in this country are met. The 2020 election will be critical for their futures.

“The future will be defined by young people. The vote is what makes our country a democracy and allows for people’s interests to be represented. Everyone who is able to vote should exercise that right,” said Elections student Meredith Nitchals (‘21).