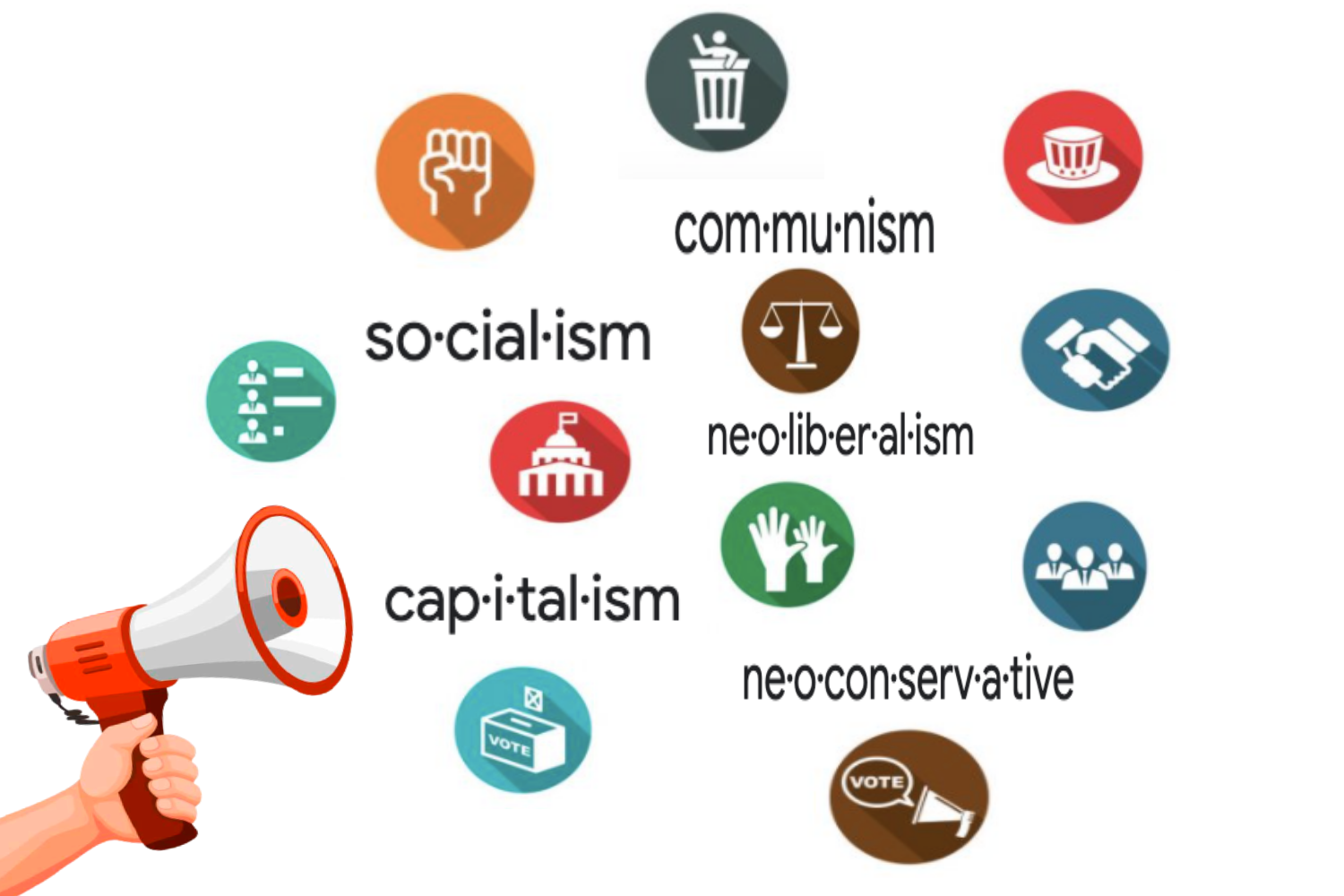 The recent presidential election has shown a need for more educated voters.

The high numbers of misinformation in the past election highlights the need for more informed voters. It is important for all citizens to be fully informed, not only so that they understand the views of different candidates, but also so they can understand the different amendments they vote for in lower level elections. It is still important to stay informed prior to turning 18 in order to understand how the government, and American system as a whole, functions. In this new series, Sophomore Staff Writer Raquelle Elson will be explaining different political terms, policies, and political buzzwords, starting with common political terms.

It's much the same way the Right think Communism is "extremely Liberal". Once again the Left-Right framing and a 2-party system has irrevocably ruined our ability, on the whole, to understand political terms and their actual manifestations in reality.

Also known as the free market economy or free aka free enterprise economy, capitalism is an economic system characterized by private or corporate ownership of capital goods, by investments that are determined by private decisions, and by prices, production, and the distribution of goods that are determined mainly by competition in a free market. Capitalism creates a competitive economy that provides incentives to create and improve one’s standings. This creates an economy that breeds innovation. On the other hand, capitalism promotes the ideal of a perfect system, claiming that everyone can succeed as long as they put in the work. This does not account for the fact that not everyone is in a place, financially, that allows for them to prosper. Capitalism also ignores the other obstacles many face in corporate America, such as systemic racism and other disadvantages faced by marginalized groups.

Madison Kwo (‘23) said, “Capitalism in America is often viewed through the rose colored lens of the ‘American Dream,’ where anyone can achieve anything because everyone has a role in the economy and an opportunity. This comes with the belief that social mobility is highly possible in a capitalistic system, when it’s quite hard to accomplish. In reality, in capitalism not everyone has equal opportunity and the economy doesn’t really belong to the people and private individuals. It belongs to a select few people because the rich just get richer and the poor just get poorer. The gap between social classes is constantly widening. You need capital to get capital or the resources necessary to get capital. So those who already have resources and capital just keep getting more, while those who have not get naught. Because America is so heavily capitalistic we have such a high GDP [Gross Domestic Product], which paints us as prosperous, when socially America is actually doing very poorly. We have such a high rate of homelessness, especially concentrated in the communities that haven’t been positioned at the head of capitalism. There are great disparities between marginalized communities and traditionally elevated groups. It’s very infuriating when a country as a whole has so much money and a certain group has more than they will ever be able to use while others are in a position where they can’t prosper.”

Communism is a political and economic doctrine developed by Karl Marx and Friedrich Engels that aims to replace private property and a profit-based economy with public ownership and communal control of at least the major means of production and the natural resources. Communism seeks to rid the overworking and exploitation of the working class ideally by creating a central controller. This is obtained through getting rid of money and social classes, replacing them with communal control. Being that there is a central controller of the economy, communism allows for a quick mobilization of economic resources, execution of massive projects, and the creation of industrial power. Communism, in theory, takes away class and social status, reducing the negative competitive aspects of the free market seen in capitalism. The amount of control that the government has over the economy serves as an incentive to enter the political scene. Once said person enters a leadership position, they will do anything to keep it. This is what leads to the dictatorships that can be seen through past attempts at communism.

Similarly to communism, socialism seeks to get rid of private ownership of property and natural resources; however, does not seek to rid society of money. In present day, socialism is often referred to in a negative connotation, in regards to policies such as universal healthcare and cancellation of student loans. Socialism works towards a more equal society, reduction of poverty, regulates free market, benefits such as universal healthcare. However, with all of the economic reforms socialism seeks to make, taxes must be raised in order to obtain them.

Fascism is a political philosophy that regards nation and race above individuality and calls for a centralized autocratic government headed by a dictatorial leader. While the fostering of nationalism may sound enticing to some, fascism is not an ideology that should be affirmed because of the mistreatment of its citizens. Fascism seeks to promote its ideology to such an extreme that it allows for the oppression of those who disagree. Similarly, the possibility that the ideal that is promoted is race creates an unsafe environment for those who are not a part of said race.

Leftists are those who follow the ideas of the left, the portion of the political spectrum associated in general with egalitarianism and popular or state control of the major institutions of political and economic life. Leftists are often referenced in the context of comparing them to liberals. Liberals support individual rights, civil liberties, and free enterprise along with a mixed economy while leftists are more radical and support a communistic or socialistic economy. While leftism is inherently good intentioned, it is unrealistic because it is such a drastic shift from the society and economy in America today, making it immensely difficult to achieve,

Neoliberalism is a policy model that encompasses both politics and economics and seeks to transfer the control of economic factors from the public to the private sector. Oftentimes, there is a misconception around neoliberalism, leading to the belief that it is a more left leaning ideology than it is. Neoliberalism promotes a capitalistic society through an emphasis on the private sector, while far-left ideologies support a transition to socialism or communism.

Variant of the political ideology of conservatism that combines features of traditional conservatism with political individualism and a qualified endorsement of free markets. The combination of a free market along with conservative viewpoints found within neoconservatism creates a hyper-capitalistic society. This would make it even more difficult for more left-wing politicians to enact policies that promote a more public sector. However, this ideology would allow for a competitive society that would breed entrepreneurship and innovation, stimulating the economy.

The two party system is a political system in which the electorate gives its votes largely to only two major parties and in which one or the other party can win a majority in the legislature. The two party system allows for voters to assume a candidate’s views simply by hearing what party they are running for. It also makes it easier to enact change because there are two major platforms to choose between. It can be seen that, as forewarned by George Washington and James Madison, the two-party system creates factions that allow like-minded people to group together, divide the nation. This causes an othering of those who disagree, worsening Americans ability to disregard their difference and come together.

Emily Porter (‘22) said, “In my opinion, the two party system is kind of confusing. Sometimes I feel like either of the parties may only like a candidate for their label, such as ‘Oh I like this person because they are a Republican or Democrat,’ so they don’t really do their research on the candidate. I think, on either side, it causes uneducated voting.”

A demagogue, also known as a rabble-rouser, is a leader who makes use of popular prejudices and false claims and promises in order to gain power. The term demagogue is used in reference to a political leader who many believe uses false information and empty promises to gain popularity. Presently, this term is used in reference to politicians such as former President Trump, because many believed he gain popularity in the 2016 and 2020 elections through the usage of false information and promises he would not fulfill.

Politics is exchanging one demagogue for another every four years.

An amnesty is general pardon for offenses, especially political offenses, against a government, often granted before any trial or conviction. This word is used in relation to pardoning, such as the pardons by former President Trump at the end of term. The ability to provide a pardon is a highly debated topic because many believe it is unfair right of the President, while others disagree.

A filibuster is the informal term for any attempt to block or delay Senate action on a bill by debating at length, offering numerous procedural motions, or by any other delaying or obstructive actions. Filibusters benefit those opposing a bill because if the Senate cannot debate the bill, then the bill that they vote on ends is the unamended bill which is less likely to receive the necessary votes, Similarly, those in favor of a bill suffer from filibusters because they are deprived of the opportunity to fix the bill before it is voted on.

“Filibusters are an interesting topic.  They are a great example of the way that Congress makes its own rules, which means that they have the power to change those rules as well.  Historically, filibusters have been used to prevent all kinds of votes but, probably, most famously, they were used to prevent bringing a lot of progressive civil rights-related legislation to a vote in the Senate.  Some proponents of filibusters suggest that requiring 60 votes to prevent a filibuster [that needed for a cloture vote] means that a policy may be more likely to be approved by a majority of Americans.  Others may push back against that in suggesting that the filibuster gives undue power to senators, specifically those from less populous states, in determining which bills can even be voted on,” said History Teacher Stacy Filocco.