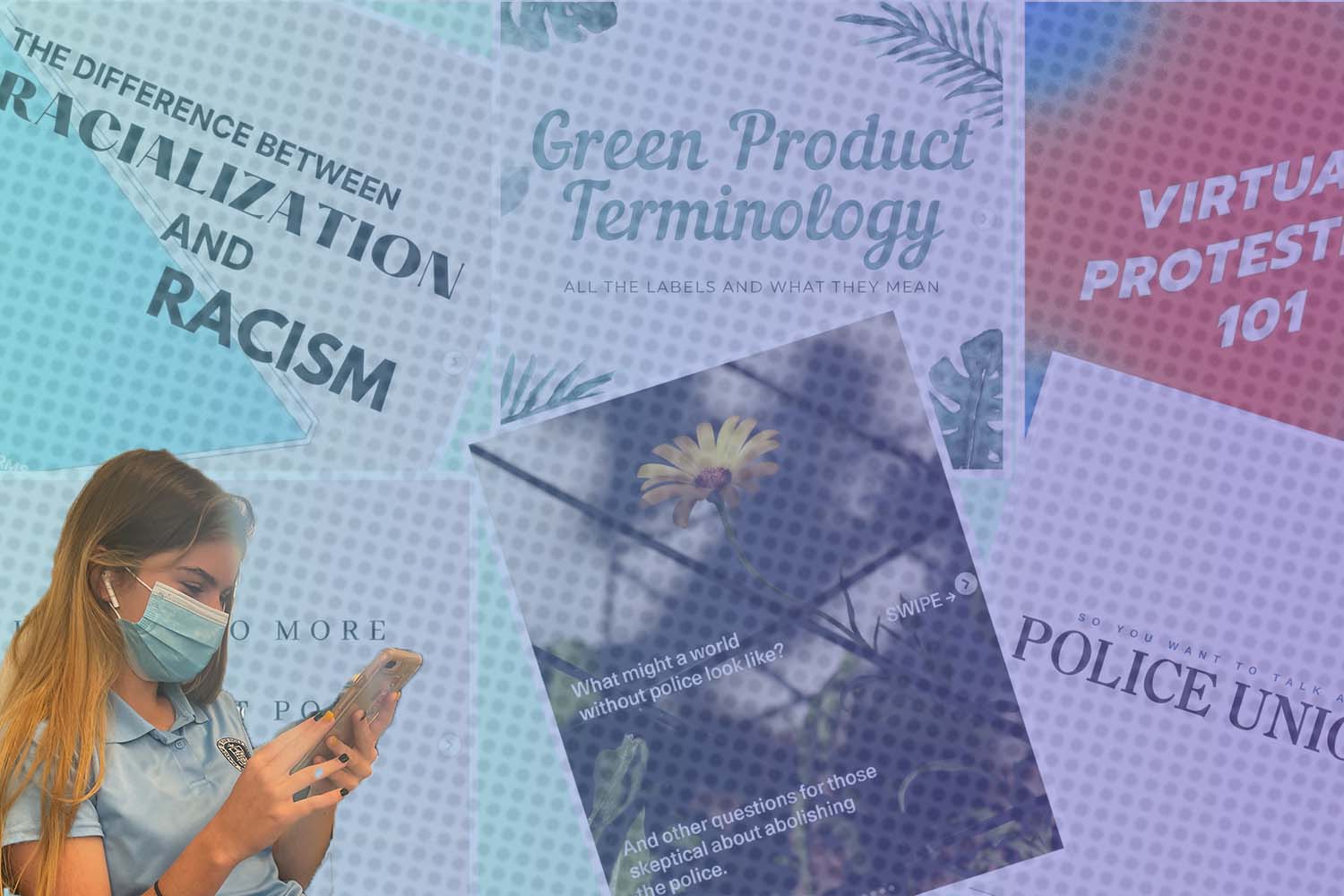 Clicktivism, the act of showing support for a political or social issue through the internet, gained popularity over the summer in response to the injustices that occurred. ((Photo Credit: Raquelle Elson/Photoshop/Achona Online))

Clicktivism, the act of showing support for a political or social issue through the internet, gained popularity over the summer in response to the injustices that occurred.

Clicktivism: Activism in the Age of Social Media

The death of George Floyd sparked a public outcry both in the form of civil unrest and activism on social media. As these atrocities continue to happen, the downside of social media activism becomes more prevalent.

“I think that activism on social media is a good thing because it is an easy way to spread information. There are a ton of different issues I would not have known about if I didn’t see it on Instagram,” Sara O’Connor (‘23).

Social media activism is an integral part of clicktivism. Clicktivism is the act of showing support for a political or social issue through the internet, through acts such as signing online petitions and the use of social media. This practice is often viewed negatively as it is often deemed lazy because of the little effort required.

While there are accounts dedicated to informing users, many users on Instagram utilize their own platforms to repost information from these accounts. When an issue is particularly dire, even A-list celebrities will speak out in support. Politicians such as Representative Ocasio-Cortez uses their accounts to inform the public about different aspects of their jobs along with current events, such as the insurrection at the Capitol.

Within a subsection of Tiktok commonly referred to as “political tiktok,” creators discuss different social issues, debate creators with opposing views, and promote a more socially aware society. The spread of activism on this platform was amplified by the social media presence of many politicians, namely Senator Jon Ossoff who utilized Tiktok during the Georgia Runoff elections to reach younger voters and spread his platform.

When looking at activism on these platforms in its entirety, it becomes clear how clicktivism could be deemed lazy. As previously mentioned, it is popularly believed that clicktivism is lazy because of its easy accessibility. Through different social media platforms, and the internet as a whole, any and all necessary information is right within reach. Users can label themselves as activists because of how many petitions they sign or infographics they share, both of which can be done in just a few clicks.

However, issues on these platforms go beyond laziness. It is easy for users to get swept up in an air of “doing good” that they participate in seemingly harmless fads that oftentimes do more harm than good.

English Teacher Angela Leavens said, “In times like these, I feel that using social media as a resource to spread awareness and create change is important. The fact that someone can share a message with the click of a button is amazing to think about, and even more so if this power is used for good.”

The most common form of activism on Instagram is through the creation and reposting of infographics, which dissect and simplify major issues in order to spread awareness. The issue that many find within infographics is not that the information is untrue, but the way that it is presented. Presenting harsh issues in a more palatable way is viewed by many as glamorizing the movement. The controversy with this is that social issues are not glamorous, nor should they come off as such. The harsh realities of marginalized communities should not have to look pretty to be taken seriously by those outside of said communities.

In addition to infographics, many users share posts that openly acknowledge their support for issues that are, in most cases, not controversial. Many of these posts claim that each post will result in a donation of a miniscule amount of money, namely one cent. Posts such as these are an example of performative activism, activism done to make one appear progressive rather than done from a place of genuine concern.

Blackout days on social media are days where people outside of marginalized communities refrain from posting. The intent is often to amplify the voices of these marginalized people so that their movement can be more easily spread.

Blackout Tuesday, which occurred mainly on Instagram, was the first and most widespread blackout but was counterproductive. This is because many participating in the blackout posted black squares to advertise their participation, flooding the app and the Black Lives Matter hashtag which made it incredibly difficult for information to be spread. Additionally, the black squares were deemed ineffective because rather than amplifying the movement, these posts were taking up space.

if u post a blank square w/o links to any resources, or bein vocal about your stance it’s the same as performative clicktivism

Blackouts have proven to work best on Tiktok, where blackouts occur periodically for different marginalized communities. Oftentimes, creators outside of these communities, rather than not posting, will give their accounts to members of these communities or duet videos from some of these people so that their content can reach a larger audience.

However, Tiktok is not exempt from criticism as it is just as guilty of taking up activism as a “hobby” as seen through its multitude of performative activists and their content.

Other videos may begin by telling viewers that if they do not watch  the video or interact with it— through likes, comments, or shares— they are condoning whichever social issue the creator is attempting to condemn. While it is understandable that many of these issues are time sensitive or that it is important for the information to be spread, guilting people into paying attention is unnecessary and sometimes inconsiderate. Many other marginalized people will see these videos, and are not always in the mental or emotional state to engage in conversations about these brutalities. Additionally, this form of attention-grabbing inadvertently promotes performative activism because it preys on the inherent want to be socially accepted. By insinuating that someone is immoral for disregarding the video, the creator may capture the viewer’s attention; however, their activism will be motivated by a fear of social rejection rather than genuine concern.

“I think that Twitter is a hotspot for performative activism because [users] say what they think other people want to hear because they are afraid of being cancelled. They aren’t thinking before they tweet,” Grace Carreja (‘23).

Despite all of this, clicktivism is still able to do a lot of good. Many people are able to learn about issues and movements easily and in an understandable way. Though it may seem “lazy,” signing petitions is an easy and productive way to fight for a cause if you are unable to do much else.