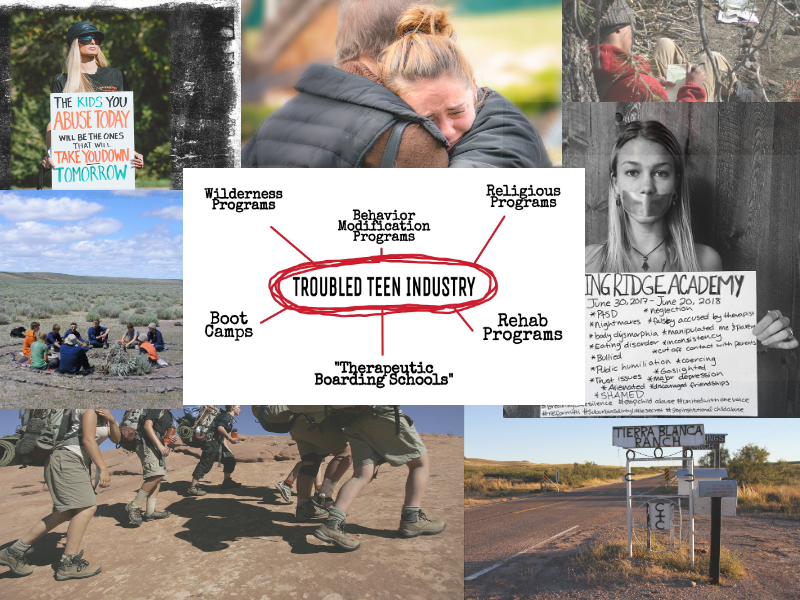 The Trouble Teen Industry has decades of abuse hidden within it. (Nicole Sakre/Achona Online/Piktochart)

The Trouble Teen Industry has decades of abuse hidden within it.

The Troubled Teen Industry (TTI) is a network of programs designed for young adults, usually for those aged 13-18 years old. While TTI is just an umbrella statement for an industry of thousands of camps and organizations all run by different people, mostly all of them are known for their corrupt, and in some cases abusive, behavior towards the teens in their care. The industry has come into the spotlight in recent years due to a movement known as Breaking Code Silence, an organization created to finally expose decades of abuse. Founders of this organization hope to shut down the TTI completely, and continue to send letters to Congress and speak to those in governmental positions who have the power to create change.

While the TTI encompasses several different types of facilities for teenagers, the most commonly known one is the wilderness camps. These camps are the most corrupt part of the TTI, and teenagers have found the courage to finally expose them for what they really are, many having first person accounts of horrific events they witnessed.

The camps and facilities of the TTI are supposedly designed to help wayward teenagers find their way in the world again, helping anyone from a drug and alcohol addict to a teenager that is in real danger of being sent to prison. However, many have started to wonder if the TTI is more concerned with how much money they are bringing in, rather than being focused on the mental health of its patients.

With more secrets of the TTI being uncovered recently, one of the most standout parts of it is the process of taking a teenager to a wilderness camp.

After parents sign over temporary custody of their child, the teenager is woken up by two strangers in the middle of the night, to catch them in their sleep. The teenager is restrained and taken out to a van with blacked out windows. They aren’t given any information as to what is happening or where they are going, and they leave with nothing but the clothes on their back. In extreme cases, if the teenager resists too much, they will be sedated to make the process run smoother.

The camps are usually deep in the Utah or Wyoming woods, somewhere where there is nothing but open land for hundreds of miles. This means that most teens have to travel a great amount of distance to arrive there, some even taking a flight.

This process can cost upwards of $7,000, depending on how much traveling has to be done.

On most websites, wilderness camps are portrayed as a therapeutic getaway for troubled teenagers, where they participate in group sessions and learn basic survival skills, like learning how to start a fire with no matches.

However, as the camps become more and more exposed, it has been discovered that it’s not run quite like they claim it to be.

Teen residents do not have the option to leave the camp that they are staying at. They are not told how long they will be there or where they will go once they do get to leave.

To avoid being government regulated and monitored by the National Institute of Health, these programs avoid branding themselves as ‘mental health facilities.’ This gives them a loophole so that they do not have to comply with federally mandated laws about how mental health facilities should be run. As a result, wilderness therapy programs are free to do what they want with the teens in their care with little to no consequences for abuse.

Paris Hilton, who was sent to a wilderness program as a teenager herself, is speaking out against the horrors within them as an adult, becoming the face of the Breaking Code Silence movement. Hilton reports that students were “restrained, hit, thrown into walls, strangled and sexually abused regularly.”

The main philosophy of the TTI is that teens need to be isolated, deprived, and broken in order for them to improve, and this is done by making them participate in humiliating group activities, forcing them into manual labor, giving them small amounts of food, and threatening them with violence.

To prevent residents from trying to run away in the night, their shoes and outer garments are taken from them. They are also given a very small amount of food and water at a time, so if they did try to run away they would starve or run out of water quickly.

In the past 15 years, about 86 teenagers have died as a result of wilderness camps. Deaths have occurred due to starvation, strangulation, exposure to the elements, and some teens have even committed suicide while at a camp. Others have died from an attempted escape but ended up getting lost and were never found.

Maia Szalavitz, the author of a book that discusses the negative effects of teen wilderness camps and ‘tough love,’ says,  “These programs are based on the premise that today’s teens are so out of control and morally compromised that only the most extreme and harsh tactics can keep them in line.”