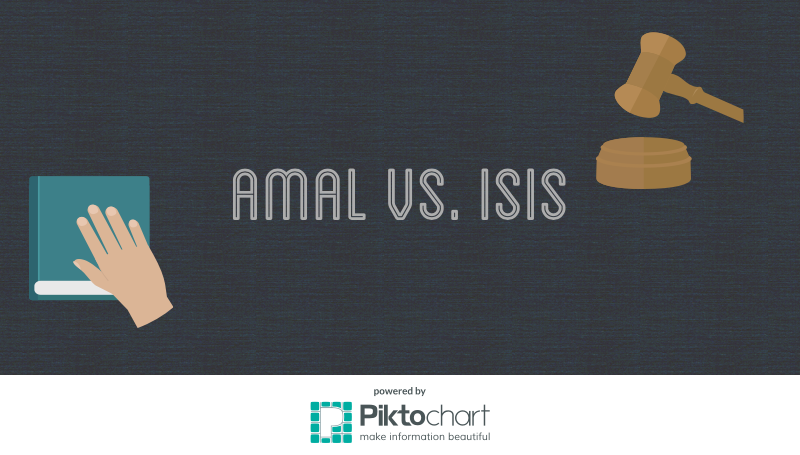 Amal Clooney has proven more than once that she is more than just the wife of Oscar winning actor George Clooney. Although she has participated in plenty of notable international cases, Clooney has officially outdone herself with the decision to sue terrorist group, Isis, for genocide.

Nobel Peace Prize winner and U.N. Ambassador Nadia Murad will be represented by Clooney throughout the entire trial. Before becoming a successful human rights activist, Murad has quite the past. In 2014, the young woman from the Yazidi community was sold as a slave and abused by members of Isis. In an interview with Time Magazine,  the Murad recalls the moment when she was about to be taken. She remembers having no knowledge of the extremist group until information concerning them was being broadcasted on TV. On August 15, 2014, Murad recalls seeing these men in her village, separating men and women. In an hour, she witnessed 312 men being murdered, along with her step siblings and her biological siblings. Eighty women were also executed because they were too elderly to be sold into slavery. In contrast, Murad recalls the extremists finding her young and attractive, leading them to sell her into slavery.

After several attempts, Murad was able to escape to safety in Germany. Ever since her escape, Murad has made it her mission to stop genocide and bring justice to all those affected, and with the help of Clooney, she will do just that.

Sophomore Greta Dieck states, “I don’t really know how this would work. I feel like Isis wouldn’t go to court. They aren’t citizens that will listen and show up. It’s cool of her to do that, but I don’t know exactly what I would do.”

In an interview with NBC, the international lawyer reveals it was Murad who inspired her to take this case. After learning about her survival story, Clooney knew she couldn’t walk away without making a change.

Amal Clooney shames the UN for letting ISIS get away with murder. pic.twitter.com/sA7N9uwMrU

With Isis’s dangerous history, many have questioned whether or not Clooney and Murad have taken under consideration the level of danger they are putting themselves under.

Abby Morris is one senior who is very passionate about social justice, and believes if she was in Clooney’s position,  “I’d like to believe I’d take the case because it’s such an important issue that needs to be solved. But at the same time, Isis is terrifying, but it’s for the common good so someone needs to do it. I think she’s the one.”

A post shared by Hannah Arendt Center at Bard (@hannaharendtcenteratbard)

With knowledge of their extremist attacks, it is obvious fighting against the group will come with negative consequences. In her interview with NBC, it was revealed that Murad has already begun to receive direct threats from Isis. Although Clooney and Murad are fully aware of the consequences they may individual face, many are concerned they are endangering the safety of Americans.

Senior Lissa Ogden believes in addition to endangering themselves, the pair are putting Americans in harm’s way, adding, “George Clooney’s wife! I’m not sure I understand how one could sue Isis, but I don’t think they are the type to civilly send a representative to court. Personally, I believe this is yet another American embarrassment. Perhaps the Clooney family feels as though a publicity stunt will make them relevant again. This situation poses a national threat and should be put to rest immediately, before Amal Clooney gets us all killed.”

These two women are risking their lives in order to bring justice to the world and to victims of genocide. Together, they have met with survivors to gather testimonies in order to build up their case. Recently Clooney met with members from the Yazidi community who were removed from their homes due to their fight against genocide.