Are “Instagram Models” Stealing The Spotlight From The “Real Models?” 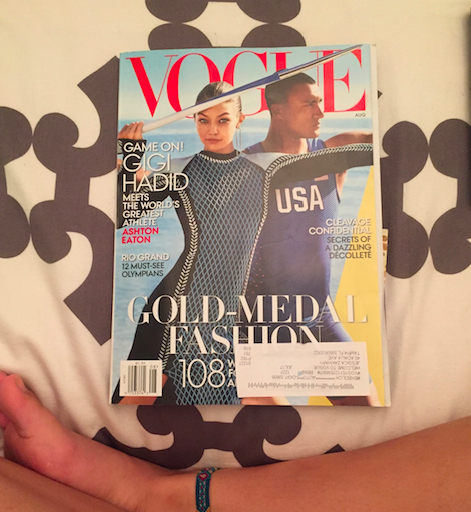 Hadid has graced many high fashion magazines, but this July 2016 edition was her first American Vogue. Credit: Jessica Zakhary/Achona Online

From Instagram posts to magazine covers, nowadays, it’s nearly impossible to go a full day without seeing a photo of Gigi Hadid, Kendall Jenner, or Taylor Hill.  While they are admired by many as being high fashion’s new “It Girls”, many criticize them for taking attention away from the more “qualified” models.

Maura Braniggan, a writer for Fashionista, shares that many critiquers are frustrated with the fashion world’s tendency to exploit the model’s number of social media followers on the covers of magazines.

Model Kendall Jenner was featured on the cover of seven magazines in October, four of which were for Vogue, which upset Brannigan.

She complains,“Why has every model who is not Kendall Nicole Jenner suddenly become unfit to appear on magazine covers? Is it now a prerequisite for potential cover stars to have an Instagram following that rivals the population of Thailand?”

Others see that social media, and the number of followers you have, are a part of a current model’s brand. Not only are models like Jenner and Hadid being pitted against current models, they are also being compared to iconic supermodels such as Naomi Campbell and Cindy Crawford, who worked for their fame before the internet was a factor.

Freshman Joely Barkett insists that, “Instagram models don’t work to be ‘famous.’ All they do is post photos to try to get large amounts of followers and gain popularity. It’s somewhat of an illusion and you don’t know what is real and what is retouched.”

Another point of conflict is the amount of covers Instagram models get every month. Vogue, regarded as the ‘fashion bible’, has been under scrutiny lately for employing Jenner, Hadid, and various celebrities for their cover stories over other less famous models.

Senior Camille Opp, who is a fashion model herself, defends Jenner and Hadid, explaining, “They absolutely deserve it. Modeling is a lot of hard work and both of them have worked hard and taken a lot of grief. If you are ever lucky enough to grace the cover of Vogue, you worked very hard for it. I respect both of them so much.”

Perhaps the most controversial part of the battle between Instagram models and “real” models is the fact that some are paid a hefty price for posting advertisements. A single social media post will cost a company anywhere from $200,000 if they want Jenner or one of her model squad friends to post about them on social media.

Not everyone agrees that being famous online has its negative effects on the high fashion world. While many don’t agree that social media should play a factor in booking jobs, it is evidently a big part of the world and an influential factor in almost everything-including the work force.