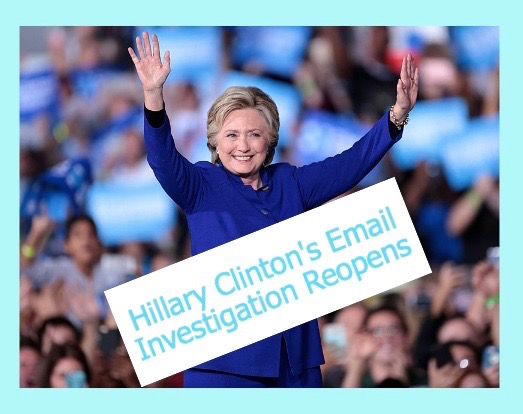 (Photo Credit: Gage Skidmore/Wikipedia) Hillary Clinton has had a long career in politics, and she has achieved many things, including breaking down barriers for women.

With less than a week until the greatly anticipated presidential election, the tension is steadily rising between the two candidates. Republican nominee Donald Trump and Democratic nominee Hillary Clinton have been the focus of every news station for over a year. Now in the home stretch of the campaign, new cases have been revealed and brought against the candidates, affecting each citizen’s view of them and changing the overall course of the election.

As freshman Isabella Salgado states, “I think this election has definitely been a rough one. I was never really into politics until this election, and I think the country has an interesting choice to make.”

Last week, FBI Director James Comey reopened the investigation concerning Clinton’s private email server, which contained classified information prone to cyber attack by other nations. In July, Clinton was found not guilty of intending to cause harm by sending these emails during her time as Secretary of State. Comey spoke for the department as a whole when he discouraged pressing criminal charges against Clinton.

After the FBI released its original statement in July, their decision has been treated with mixed emotions throughout the country. Some people treat the decision as controversial, whereas others agree with the FBI’s recommendation against pressing criminal charges. Several parties believe the evidence is too substantial to not take any action against it.

However, more evidence has been recently revealed, and it has caused the FBI to reopen Clinton’s case. Former Congressman Anthony Weiner, who is being investigated for sexting by the FBI, had his computer confiscated to collect evidence concerning the charges against him. While searching the contents of Weiner’s computer, the FBI found several emails that were exchanged between Huma Abedin, Weiner’s former wife, and Clinton. Abedin is Clinton’s past aide, and the emails that they sent to each other are believed to contain classified information.

After obtaining a warrant to search through the new emails, the FBI has begun the process of determining whether the content within the emails is detrimental. Reportedly, Weiner’s computer is said to contain over 650,000 emails between Abedin and Clinton.

'I can't predict how long this will take us to complete' – Comey on reopening Clinton email investigation https://t.co/6SJJAU349V pic.twitter.com/EjuwwFENZ8

The cases’ reopening is receiving several different emotions and opinions. Various Republican officials are praising the FBI’s decision. In addition, Trump has been using the development to promote his campaign.

Look at the way Crooked Hillary is handling the e-mail case and the total mess she is in. She is unfit to be president. Bad judgement!

As House Judiciary Chairman Bob Goodlatte states, “Now that the FBI has reopened the matter, it must conduct the investigation with impartiality and thoroughness. The American people deserve no less and no one should be above the law.”

However, the reopening of the investigation against Clinton has also been receiving backlash. Attorney General Loretta Lynch has expressed her disapproval concerning the FBI’s decision after the department acted without her mandate. Lynch believes that the reopening of the case against Clinton is too close to the election, and could have a large impact on next week’s outcome.

Sophomore Blakely Byrd expresses, “I think that the whole situation behind the emails is sketchy. However, I do not know how on board I am with the FBI reopening the case right before the election. I feel like it was planned in order to affect Hillary Clinton in the election.”

Whether the decision receives praise or disapproval, the FBI’s choice to continue the investigation will stand. Although both sides share different opinions and beliefs, they both agree that this development could greatly influence the election. However, it is predicted that the FBI will not reach their decision on the matter until well after the election is over.