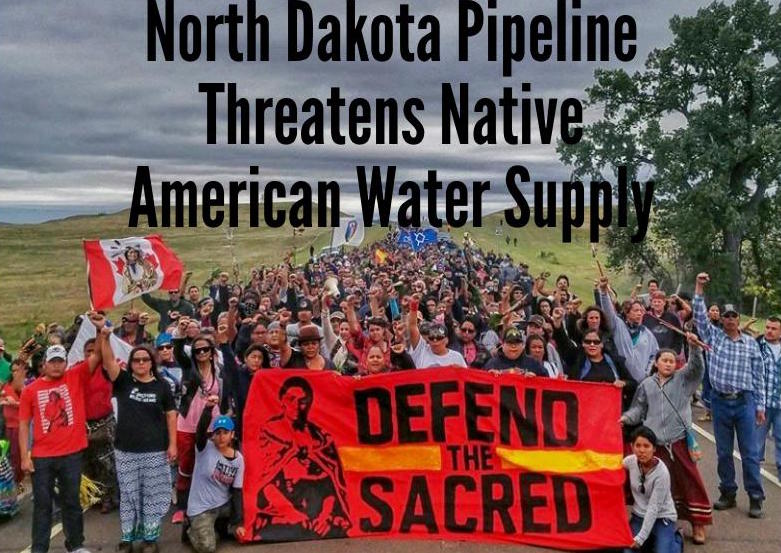 Hundreds of protestors march against the construction oil production all around the U.S., including several areas in the Midwest and D.C.

Recently, the Energy Transfer Partner based in North Dakota has received backlash from Native American Tribes in the Midwest over the Dakota Access Pipeline. The plan is to construct an underground pipeline that will pump 20 million gallons of oil across North Dakota into Illinois. Geologists estimate over 7.4 billion gallons of undiscovered oil that they can extract and bring to US markets and to reduce the dependency from oil imports from overseas. This pipeline is said to create over 12,000 jobs for Midwestern Americans and will be safer than transporting oil by trucks, which is often a safety hazard.

However, the teams behind the pipeline have received backlash from surrounding Native American tribes around the pipeline. In order to dig 30 feet under the ground to access the oil, the workers will damage sacred and historical Native American sites, including burial grounds, in the process. Heading the Campaign against construction is the Standing Rock Sioux Tribe who filed a lawsuit against Energy Transfer Partners. They also argued that the pipeline with pollute rivers and streams “of utmost cultural, spiritual, ecological, and economic significance.” Hundred of Native Americans on the reservation depend on Lake Oahe, which is in danger of becoming polluted since oil pipelines are at high risk for breaking. The Sioux Tribe also argues they violated preservation guidelines when they decided to start the protect. The tribe requested to halt the construction of the pipeline, but the Court of Appeals denied it, allowing the pipeline to continue. Even though their legal request was denied, Dave Archambault II, chairman of the Standing Rock Sioux Tribe, stated that they have not given up hope and will continue to protest in peace.

Teaming up with ecologists and U.S. veterans, Standing Rock has been locked in a bitter protest with construction workers over the past several months at dozens of demolition sites. Several other tribes have joined Standing Rock in their protests over water safety and preservation. There have been standoffs with local police and, recently, the National Guard that have resulted in several arrests and acts of violence, including pepper-spraying and high-pressure water cannons.

Recently, celebrities have spoken out against the pipeline and few have even participated in the peaceful protests in North Dakota. Many voiced their support on social media around Thanksgiving Day, tweeting the hashtag #NoDPL. Actress Shailene Woodley was arrested on October 11th and charged with criminal trespassing and engagement in a riot while standing alongside over 200 Native American people.

She released a statement concerning her arrest, enraged with the treatment of the Native American culture. Woodley said, “ We wear their heritage, their sacred totems, as decoration and in fashion trends, failing to honor their culture. Headdresses, feathers, arrows. Moccasins, sage, beadwork. We buy plastic teepees from Toys-R-Us and set them up in our living rooms for children to play in. We grow up romanticizing native culture, native art, native history… without knowing native reality. And now, in 2016, in the day and age of exciting technology, which empowers revolution and curiosity, we are still blindly (or maybe not) allowing 200 years of unjust history to continue.” Woodley continues to stand in solidarity with the Sioux tribe.

one week ago, I was arrested while protecting water against the #dakotaaccesspipeline … my article on it. https://t.co/hrgF97qHLl

Many argue that they have seen this pattern in the treatment of the Native American people and their land from over 200 years ago. Non-native Americans imposing and making decisions on natives’ lands that they have protected for several years and being criticized when they fight back for what is lawfully their in the process.

Last Night the US Army Corps of Engineering announced they will stop the rerouting of the Dakota Access Pipeline near the Standing Rock River reservation, a win for Native American protesters everywhere. Many protesters called for the Obama administration to stop the construction. This accomplishment demonstrates the power of peaceful protesting to make a difference that will impact future generations.

Chairman Archambault released a statement saying, “We wholeheartedly support the decision of the administration and command with the utmost gratitude the courage it took on the part of President Obama, the Army Corps, the Department of Justice, and the Department of the Interior to take steps to correct the course of history and to do the right thing.”