Meryl Streep Takes a Political Stand at the Golden Globes 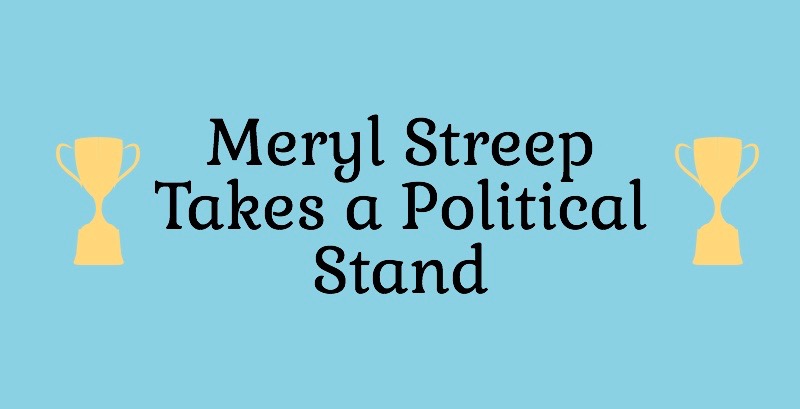 Meryl Streep is a well-known actress who played a role in films such as The Devil Wears Prada and Mamma Mia!

On January 8, 2017, the 74th Golden Globe Awards aired on NBC. Several popular movies were nominated for awards, such as Best Motion Picture. The award ceremony allowed for a wide range of talented actors and actresses to receive recognition for the roles they played, as well as the work they put into bringing their characters to life.

This year, renowned actress Meryl Streep received the Cecil B. DeMille Award, which is given to an actor or actress who has made major strides in the world of entertainment. Some of the previous recipients of the prestigious award include Denzel Washington and Jodie Foster.
During her speech, Streep touched upon several different topics, a few of which have been very controversial throughout the nation. She began her speech by expressing her gratitude to the Hollywood Foreign Press Association for honoring her with the award.

Soon after, Streep began naming specific actors in the room who were born outside of the United States. Among them were Ryan Gosling, Natalie Portman, and Amy Adams.

Following these statements Streep said, “So Hollywood is crawling with outsiders and foreigners, and if we kicked them all out you’ll have nothing to watch but football and mixed martial arts, which are not the arts.”

Streep went on to describe a “performance” that “stunned” her. Although she did not mention his name, Streep’s statements alluded to President-Elect Donald J. Trump, who can be seen in a video making fun of a disabled reporter. Across the nation, the media has debated whether Trump’s intention was to mock the reporter or not.

As Streep said, “It was that moment when the person asking to sit in the most respected seat in our country imitated a disabled reporter. Someone he outranked in privilege, power, and the capacity to fight back. It [it] kind of broke my heart.”

"When the powerful use their position to bully others we all lose." Read Meryl Streep's Golden Globes speech: https://t.co/GGpdeD7bne

Freshman Julianne Hahn said, “I think the Golden Globes was a weird place for Meryl Streep to take a political stand, but she is entitled to say what she wants.”

On Twitter, several users pointed out Streep’s bravery, as well as their belief that her message needed to be shared. Other users, however, criticized Streep’s decision to involve herself in politics.

If you haven't heard Meryl Streep's speech at the Golden Globes yet, please watch it and listen all the way through. She's perfect.

Meryl Streep, a phenomenal actress, is utterly tedious & pedestrian as a political commentator.

Trump was quick to respond to the contents of Streep’s speech via Twitter. Within the tweet, Trump calls Streep “one of the most over-rated actresses in Hollywood.” In one of his following tweets, Trump also made sure to point Streep out as a Hillary Clinton supporter.

As sophomore Summer Wolf said, “I think Trump should not have said something back, especially via Twitter. As our soon-to-be President, I think he should have taken a more mature approach when he responded.”

Meryl Streep, one of the most over-rated actresses in Hollywood, doesn't know me but attacked last night at the Golden Globes. She is a…..

With the inauguration approaching on January 20, the media will continue to influence politics. As the United States’ government officials change, there will be tension, which is true of all new changes. Ultimately, those tensions will allow for those in the public eye to correct their mistakes and how they choose to be seen in the public eye.