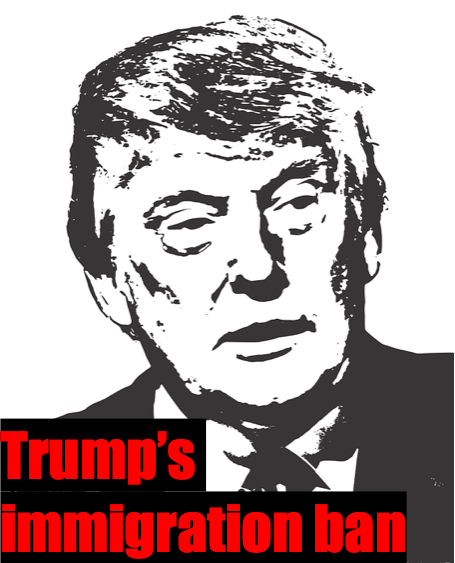 During the week of January 23, 2017, Trump signed three executive orders regarding immigration, refugees, and visa holders.

President Donald Trump, has recently announced an executive order restricting citizens of seven countries from entering the United States for 90 days. Not only does the ban put a bar on the citizens from those seven countries but it halts the refugee system for 120 days. The seven countries whose citizens are banned from American soil are Iran, Sudan, Syria, Libya, Somalia, Yemen, and Iraq who are all Muslim majority nations.

Freshman Callie Mellon said, “That is not the way to secure our borders and keep Americans safe, it hurts foreign citizens and refugees more than it helps Americans.”

The ban is intended to keep radicals out of the US, according to Trump, but has negatively affected legal U.S. residents who have green cards. Because green cards were not mentioned in the ban, many permanent U.S. residents are being denied re-entry to the United States.

Junior, Gillian Garcia is not fond of Trump’s executive order.

The ban widely affects refugees as well because the executive order suspended the United States’ Syrian refugee program and reduced the number of refugees who are allowed to enter the US in 2017 from 110,000 to 50,000.

Hopefully this ruling against Trump’s immigration ban will restore some of the damage he's done to our nation's reputation around the world. https://t.co/jQq9dK2wqz

According to President Trump, the executive order was set in place to protect the economic well-being of lawful immigrants who have been living here by substantially decreasing foreign worker admissions. The immigrants who will be allowed to enter the U.S. will have to show a likelihood of success and the ability to be financially self-sufficient.

'Immigration Ban Is One Of Trump's Most Popular Orders So Far' pic.twitter.com/wAelwuQ4BE

Although the ban imposes a lot of hardships for citizens from the seven countries, green card holders, and refugees, the executive order can be subjected to a legal review. Opponents in government, such as Senate Minority Leader, Chuck Schumer, argue that the ban is unconstitutional- violating the first and fifth amendment rights.