Hillary Clinton: Out From Under 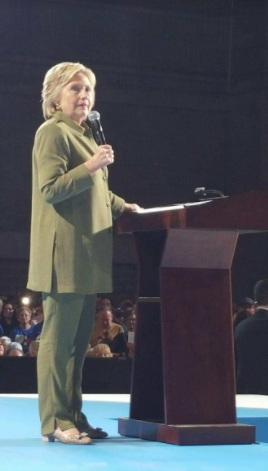 Clinton’s campaign slogan was made popular with the hashtag #I’mWithHer.

Former Secretary of State, Hillary Clinton lost her battle for the presidency last November of 2016 to Republican, Donald Trump by a majority electoral vote. Her second time running, Clinton held a vast candidacy for Leader of the Free World with an extensive amount of tours and rallies thru-out the United States, making frequent appearances in the Tampa/ St.Petersburg area.

"To all the little girls watching…never doubt that you are valuable and powerful & deserving of every chance & opportunity in the world."

Hillary Clinton was no stranger to being a presidential candidate as she toured with her husband, Bill Clinton, who ran and won the presidency in the early nineties and ran herself for position in ‘08. After her loss in 2016, Clinton took the time to herself she has been seen on social media hiking and watching acclaimed Broadway shows such as The Color Purple and Sunset Boulevard. Since then, Hillary Clinton seems to be out from under.

On March 17, Clinton appeared at a rally in Scranton, Pennsylvania which consequently happened to be the same time the Academy missionaries were working in the community. There, Clinton made one of her first public announcements since the loss, “I am ready to come out of the woods.”

Since then, Clinton re-entered the political arena and has made indirect statements that oppose many of Trump’s current or future bills. At a stop at the Georgetown University Institute for Women, Peace and Security, she made a point to generalize that many of these policies will take back or descend the fight towards women’s rights. She cited Trump’s attempt to defund Planned Parenthood. Furthermore, she focused on the prominent role women play in society and peacekeeping around the world and gave ideas on how the current government should handle its role as a global leader in international affairs.

Natarsha, whose breast cancer was caught early because of a screening at Planned Parenthood, which Republicans would defund. pic.twitter.com/oTXMjrw8Tv

Clinton made a statement and said: “I believed . . . and believe even more fiercely today, that advancing the rights and full participation of women and girls is the great unfinished business of the 21st century,”

Clinton said, “It seems self-evident: It’s not only the right and moral goal for us to be pursuing . . . [but] this is strategic and necessary for matters of peace, prosperity, and security. It is not a partisan issue. It is a human issue.”

Hillary Clinton also made a powerful ending statement concerning the current sociopolitical climate where threats to women’s opportunities seem mounting: “Standing up for the rights and opportunities of women and girls must be a cornerstone of American global leadership,” she added, “and therefore it must be woven throughout our foreign policy.”

Senior Claire Leto has been a Hillary supporter from the start and says, “I stand behind Hillary and what she stands for because her campaign was based off acceptance. Her stance on civil rights sold her for me, as she doesn’t judge or discriminate people based off race, religion, gender or orientation.”