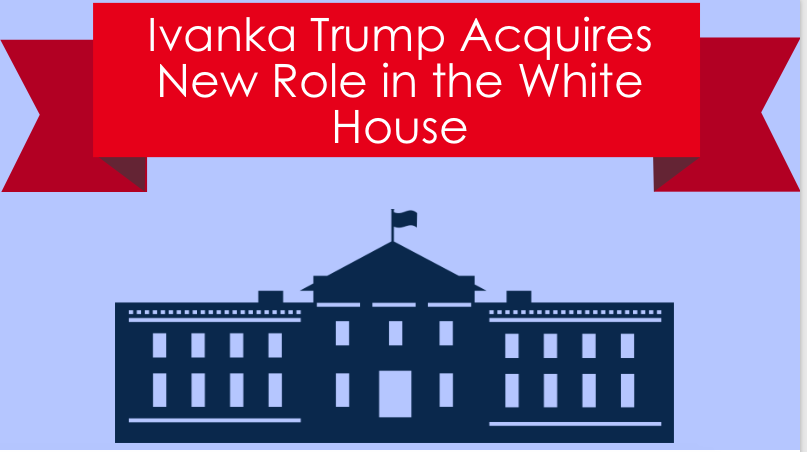 On March 29, Ivanka Trump became an informal advisor to her father, President Trump. Yet, critics are skeptical of her new status, claiming that she would not be required to follow regular government ethic standards. This is due to her not officially being a federal employee, but having her own office in the West Wing and having security clearance.  However, Ivanka Trump reassures that she will be unpaid. There is also suspicion about breaching family nepotism rules as Ivanka Trump’s husband, Jared Kushner, is already an unpaid White House advisor as well.

The anti-nepotism law states, “A public official may not appoint, employ, promote, advance, or advocate for appointment, employment, promotion, or advancement, in or to a civilian position in the agency in which he is serving or over which he exercises jurisdiction or control any individual who is a relative of the public official.”

Senior Sarah Tevlin says, “I think Ivanka Trump becoming an advisor is ridiculous. I question which qualities allow her to be an advisor. Whether she is paid or not, I think it’s a violation of ethics, because her position will still allow her to influence policy in her favor.”

Senior Katie Hale says, “Personally, I’m fine with it. I think very highly of Ivanka, she worked hard for the position. In our lives we are advisors to our fathers to a certain extent. This is the same, except magnified because her father is the president.”

Gayle King, an anchor of “CBS This Morning,” recently interviewed Ivanka Trump about her new role in the White House.

Ivanka Trump said, “I’ll continue the advocacy work that I was doing in the private sector- advocating for the economic empowerment of women. I’m very focused on the role of education. This particular title was about giving critics the comfort that I’m holding myself to that highest ethical standard. But I’ll weigh in with my father on the issues I feel strongly about.”

"This isn’t about promoting my viewpoints. I wasn’t elected by the American people to be president." — @IvankaTrump https://t.co/RB5MYqy7Jd pic.twitter.com/kZ4GhvEoj8