Trump Announces the End of DACA 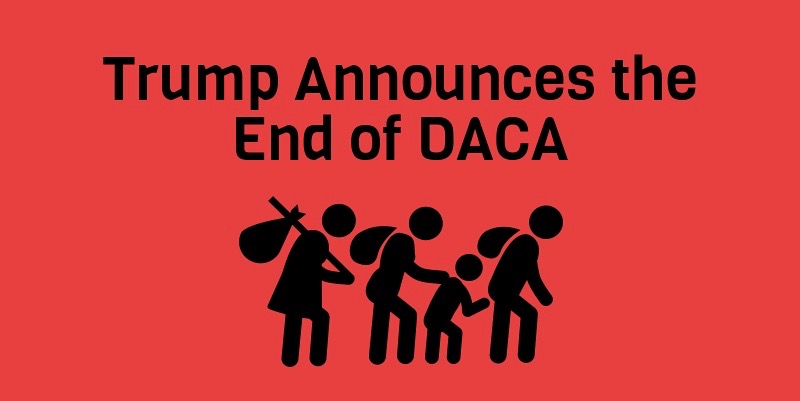 Over 800,000 people are currently protected under DACA.

On Sept. 5, 2017, the Trump Administration announced their decision to end Deferred Actions for Childhood Arrivals, better known as DACA. DACA was introduced in 2012 by the Obama Administration in order to provide immigrants under the age of 31 a two year period in which they are ineligible for deportation.

Congress now has 6 months to legalize DACA (something the Obama Administration was unable to do). If they can't, I will revisit this issue!

In order to be considered for DACA, immigrants looking to apply must meet a set of specific requirements. For example, if the applicants have been charged with a felony or the person did not enter the United States before turning 16, the applicant does not qualify.

Junior Hira Khan, who is a supporter of DACA, said, “I feel that DACA is the epitome of what it means to pursue the American dream. Those who are a part of this program may have come here illegally through their parents, but this country is as much theirs as it is mine. They have proven time and time again that they are educated individuals who are willing to work hard, and it those people who are the most valuable assets of society.”

In contrast, others take a different approach to the end of DACA. Those who support the end of the program believe that the act takes away opportunities for Americans. From their perspective, these opportunities were given to the immigrants protected under DACA instead of American citizens. In addition, some believe that the funding for the program and its solution should be used for something different, such as the poverty found throughout the United States.

Spanish teacher Micky Stagg said, “I think there has to be some kind of route to being amicable towards these people because they were brought into the country as children. However, as a daughter of two immigrants, I do believe that you need to gain citizenship in the correct, legal way. My parents waited seven years, and they completed the whole process legally. These kids coming into the country are wonderful, but if there are no requirements there will be more people who follow suit and break the law.”

What about your voters @realDonaldTrump who struggling under MASSIVE healthcare cost +DACA illegals taking our jobs?https://t.co/dTQOBtvkUi

In response to DACA’s end, some senators have made a move towards passing the Dream Act. The Dream Act is similar to DACA, but it provides immigrants with a more direct method to gain citizenship.