The Tampa Bay Is Clean Again 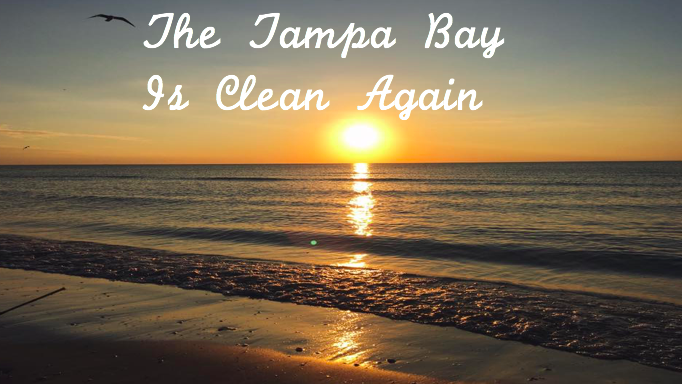 Over the last decades Tampa Bay’s water quality has experienced many ups and downs.

The Mirabella Fish Company was Tampa’s main fresh seafood vendor during the first half of the 1900s. The Tampa Bay waters and the Gulf of Mexico were full of fish at this time and allowed Mirabella’s to be very successful. The Mirabella docks were located on the eastern side of the Hillsborough River, just South of Water Works Park. At that time the water was unpolluted and by the 1930s, they were able to build more docks and establish a brick and mortar store where sold their fish to the community. The Mirabella Fish Company remained open until 1988, however the water quality of the river and the bay began to suffer. Businesses and industries were growing rapidly after World War II — pollutants and sewage from factories, warehouses and boatyards were leached into the Bay.

The Tampa Bay’s water was harmful to sea animals for decades; however, in 1979, the Howard F. Curren Advanced Wastewater Treatment Plant started treating the water and pumping it into the bay. This process was able to slowly flush out the highly polluted water which began to help the aquatic ecosystem.

In 2013, the water quality of the Tampa Bay was suffering from an increased amount of pollution. According to The Tampa Bay Estuary Program, The Tampa Bay is the largest open water estuary on the Gulf of Mexico, yet it is assaulted by more than 4 billion gallons of oil, fertilizer ingredients and other hazardous materials each year. Additionally, The U.S. Environmental Protection Agency  , has reported that Tampa-St. Petersburg is the most densely populated region in all of Florida, yet Hillsborough County ranks first in Florida for miles of streams unprotected by the Clean Water Act, and much of Florida has no data whatsoever. Likewise, more than 80 percent of the lakes and reservoirs that have been tested in Florida have failed basic water quality standards. Yet, over 2/3 of the Florida delegation voted to undermine restoration of Clean Water Act safeguards.

You can be any age to volunteer check out some #GirlScouts cleaning our #beaches during the #GreatAmericanCleanup pic.twitter.com/HX4ub3ji5M

Nonetheless through years of work by environmentalists and government agencies, strategies have been devised to improve the Bay’s water quality. Such approaches include restoring the balance between the uplands and wetland and implementing water improvement projects. Since around 2015, The Tampa Bay’s water quality has begun to improve on significant levels, the Southwest Florida Water Management District found 40,295 acres of sea grass, which helps clean up water, in Tampa Bay – also indicating the water is the cleanest it has been in a long time.

Keep Tampa Bay Beautiful hosted an after Gasparilla clean-up. Hundreds of volunteers arrived Sunday morning to clean up the thousands of pounds of trash and beads that were left behind.

Senior, Morgan Salzsieder participated in the event and said, “ We worked very hard to get all the trash up off in the ground so that it would not have a chance of being carried into the Bay. They even had us get on our hand and knees to pick up all the broken beads and confetti.”

The following weekend KTBB sent out volunteers on kayaks and divers to clean the left over beads and trash from the bay.

The cleaner bay is allowing sport fish and dolphins the ability to return to the waters that surround downtown Tampa. Now everyday you can see fishermen reeling in their catch and people gathered along the railing of Bayshore and the Riverwalk pointing at dolphins.