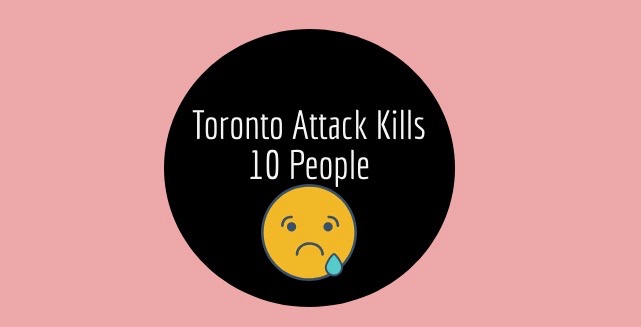 Over the course of the last several years, van attacks have become more frequent due to the terror group ISIS, who uses them as a major tactic.

On April 23, 2018, a van hit multiple pedestrians in Toronto after intentionally breaching the sidewalk. Alek Minassian, who is 25 years-old, has since been accused of conducting the attack, which took 10 lives and injured many more. Minassian has been taken into custody by officials.

Alexa Fredericks (‘20) said, “I cannot comprehend why someone would want to kill so many people senselessly.”

Minassian conducted the attack using a rented van. The van was able to travel along the sidewalk for close to a mile before the suspect was stopped and apprehended by law enforcement. Minassian is facing 10 counts of first-degree murder and 13 counts of attempted murder. Victims of the attack were of various nationalities. South Korea and Jordan have both confirmed that their citizens were among the victims.

Madison Rooth (‘19) said, “I think that the attack was such a sad and tragic incident. I think that we should all band together to support the people suffering because of this, and do what we can to prevent future occurrences.”

These are the victims of Toronto's deadly van attack https://t.co/MkFZtFuJC5 pic.twitter.com/sUqRdXPkfa

When the suspect was apprehended by authorities, Minassian and police officers faced off. Minassian pointed an unknown object in the direction of the police and repeatedly screamed “kill me” before being arrested.

The possibility of a link to terrorism has been ruled out by officials. Although Minassian’s motive remains unclear, authorities are investigating the attacker’s involvement in an online “incel” society, which stands for “involuntary celibate.” The online members target women in order to express their anger over being deemed unattractive by females. In a message posted to Facebook before the attack, Minassian referenced many beliefs held by the incels. In addition, the post endorsed a similar attack conducted by Elliot Rodger in 2014, who killed six people.

Samantha Cuttle (‘20) said, “I think that the attacker’s motives show where most men see women in society, and how women have to live up to their standards. I think that that is pretty sad.”

Minassian’s next court appearance will be on May 10.