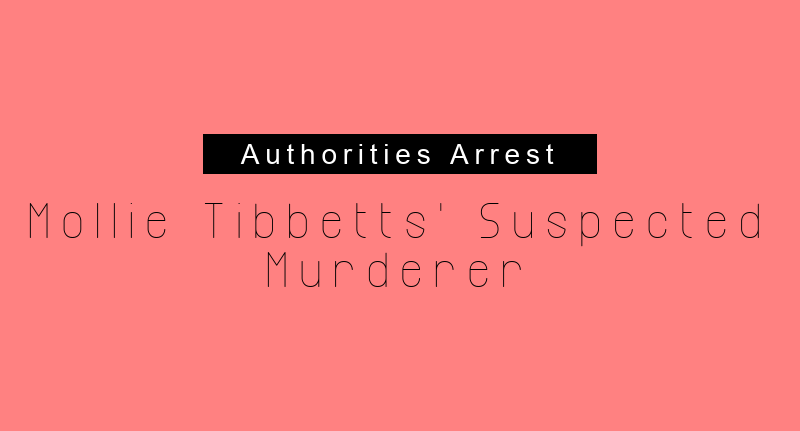 According to the National Crime Information Center, in 2017, 260,977 females under the age of 21 went missing in the United States.

After her disappearance in July, authorities recovered the body of college student Mollie Tibbetts on August 21, 2018. Officials detained suspect Cristhian Bahena Rivera, who was charged with first-degree murder, after he made a full confession to her murder and led authorities to Tibbetts’ body.

Riley Schindler (’20) said, “Mollie’s story makes me really sad, and it makes me feel bad that the situation could be twisted so that she will not get the justice that she deserves. I feel bad for her because to her, it was just a normal day before that man took her life away. When I am running, I always find myself having to check over my shoulder because of incidents like this. I think it is a very alarming thing we have to look out for.”

Tibbetts, who was 20-years-old, was a student at the University of Iowa. She was last seen running before she was reported missing. Authorities offered a reward for leads about her disappearance that reached $400,000. A neighbor’s surveillance cameras led officials to Rivera, whose car was pictured following Tibbetts as she ran.

Rivera hid Tibbetts’ body in a cornfield. According to official autopsy reports, Tibbetts’ death was a result of stab wounds. In his confession, Rivera claims that he blacked out during the attack and can only remember what happened before and after the murder. Before he blacked out, Rivera remembers that he felt angry after Tibbetts confronted him for following her. However, he recalls nothing after that until hiding her body.

Colleen Duffy (‘19) said, “I believe that he is lying about blacking out during the murder. Just because he supposedly blacked out doesn’t mean that he isn’t responsible for his actions.”

Since Rivera’s arrest, police have released information about the suspect. Authorities believe that Rivera, who is 24-years-old, has been living in the United States illegally for seven years after crossing into the United States from Mexico. Rivera worked at Yarrabee Farms, which is located in Brooklyn, Iowa, before his arrest. His employer has since revealed that Rivera worked at the farm under a false name.

Tibbetts’ murder reinforces the idea that danger can be present even in moments that seem unlikely. In order to take precautions against these threatening situations, it is important to always assess the surrounding area and to look out for specific signs of danger, such as displays of aggression. It is also important to approach an unfamiliar area or situation with a partner, whether that be a friend, family member, or a familiar adult. In addition, carrying pepper spray or a Sound Grenade in an accessible bag provides a form of defense in case of an attack.

For women, there is never really a moment where we can be in a public space and not on guard. https://t.co/LcVsBmMeNy