Hurricane Florence made landfall as a Category 1 hurricane near Wrightsville Beach, North Carolina on September 14. Florence is the first hurricane to hit the Carolinas since Category 1 Hurricane Matthew of 2016, and the strongest major hurricane to hit the Carolinas As the National Hurricane Center forecasted life-threatening flash floods and storm surge the days leading up to the storm, citizens from around the nation had their eyes on the Atlantic Seaboard.

The week leading up to the arrival of Florence was filled with national panic. From September 5 to landfall, Florence’s winds fluctuated between tropical storm and Categories 3 and 4 hurricane winds. On September 7, North Carolina Governor Roy Cooper declared North Carolina under a state of emergency, and South Carolina Governor Henry McMaster did the same on September 8. By issuing a state of emergency, the government has the ability to provide aid to subsidize resources in the prevention of damage and restoration in the threat of a natural disaster. On September 11, the government issued evacuation orders to more than one million people along the Carolina and Virginia coasts as Tropical Storm Florence strengthened to a Category 4 hurricane with 140 mph winds.

Cece Williams (’21) says, “We used to have a lake house in the Outer Banks in North Carolina. After seeing the destruction in North Carolina from the hurricane, I got really sad because that is where all of our childhood memories were.”

The earliest reasonable time that tropical-storm-force winds could arrive in the United States from #Florence is late Wednesday, and the most likely time is Thursday morning. Wednesday should be the last full day to prepare, so plan accordingly. https://t.co/tW4KeGdBFb pic.twitter.com/eD2onAT1sd

At 7:15 AM on September 14, Hurricane Florence struck North Carolina near Wrightsville Beach with maximum sustained winds of 90 mph. Though it had weakened to a tropical storm by the end of the day, Florence slowed to 3 mph; the danger in this is that slow speeds cause catastrophic flooding, making it a force to be reckoned with.

On September 15, Florence expanded to a 350 mile wide storm with 45 mph winds. From Thursday to Sunday, more than 30 inches of rain fell in various areas of the Carolinas. By Sunday, September 16, Florence weakened to a tropical depression, leaving some cities of the Carolinas with rain, tornadoes, rising river water, hundreds of thousands of people without power, and blocked roads. Florence then transitioned to a post-tropical cyclone with 25 mph winds on the morning of September 18.

Junior Frannie Ferreri says, “It reminds me of what Florida went through last year with Irma. However, Tampa was expecting much worse; North Carolina was not as prepared and has some areas that are now devastated from the extreme flooding.”

Before and after #HurricaneFlorence. pic.twitter.com/LELolIKbW5

On September 19, the death toll from Florence was up to 37 people. President Trump is expected to make an appearance in some of the areas that were demolished by Florence. Michael Jordan, a Wilmington native, has donated $2 million to North Carolina and set up a site to direct people’s donations to ethical organizations for relief and recovery.

Senior Emily Catherine Haly, a Charleston native, was sad upon seeing the catastrophic flooding left behind by Florence. However, her friends from her hometown evacuated from their home and came to Tampa for the weekend, allowing Haly’s two worlds to meet, making the most of the disaster.

“Three of my friends evacuated from Charleston SC to Orlando Florida because of Hurricane Florence. They came down to Tampa to visit me for the weekend! Luckily Hurricane Florence didn’t destroy any of their homes and I was lucky enough to get to visit with them,” says Haly. 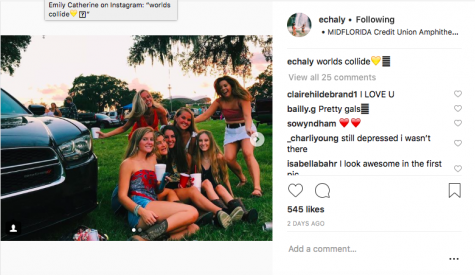