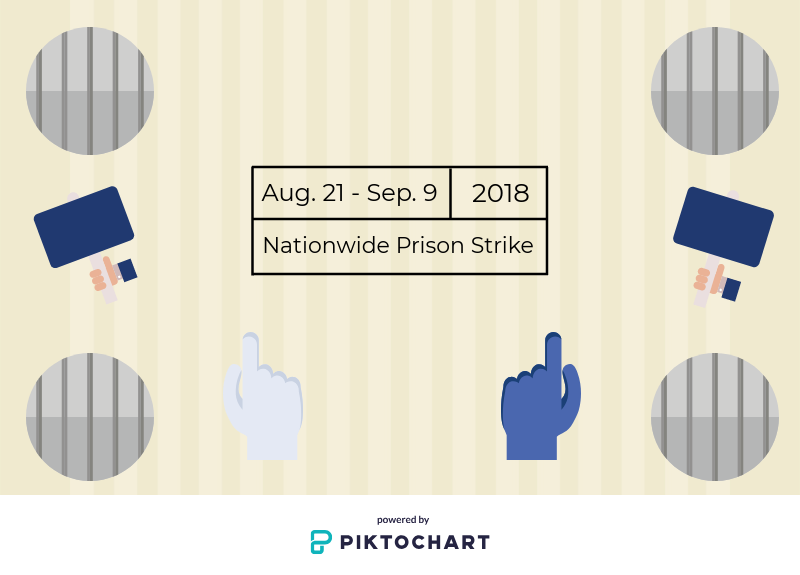 According to the Federal Bureau of Prisons, 46.1% of prisoners are in for non-violent drug offenses.

Beginning on August 21, 2018, prisoners from across the United States decided to participate in a prison strike which ran through September 9. The rallying prisoners have decided to take action in order to bring attention to low inmate wages, decrepit facilities, harsh sentences, and even extending to the request for expanded access to rehabilitation and educational opportunities for inmates.

The strike was prompted by a riot which occurred at the South Carolina Lee Correctional Institution, a maximum security prison, in April, earlier this year. The riot resulted in the deaths of seven inmates along with the hospitalization of 22 others. The anger surrounding the event was attributed to the lack of response from the prison’s security guards, who refused to intervene or offer medical attention for hours following the riot.

Though the information surrounding the strike is incredibly limited, a group of incarcerated individuals on Twitter have made it their mission to distribute as much information about the event as possible. Much of the secrecy and privatization surrounding prison strikes is due to the lack of publicity concerning the inner workings of individual prisons, as well as the proclivity of administrators within prisons to keep any conflict as discreet as possible in order to avoid retribution from the public. The prisoners responsible for the strike refer to themselves as Jailhouse Lawyers Speak, @jaillawspeak on twitter, a self-proclaimed “incarcerated group of prisoner rights advocates.”

If we are going to make any advancement on the prison class human rights, we have to change the laws. All Power To The People!! #prisonstrike #10strikedemands #right2votecampaign

The strikers have incorporated multiple methods into their plea for the correct implementation of their basic rights as prisoners. These methods include hunger strikes, refusal to work, and inmate sit-ins. The hope of these individuals is that their endeavors will lead to the recognition of the ten demands that were issued using the aforementioned Twitter account.

“I think that the prisoners are asking for basic human rights, and it’s only reasonable that they are listened to. I think if the government is trying to put them back in society, who not give them the resources to do that?” says Sam Cuttle (‘20).

One of the most emphasized demands on the list – and the demand which much of the strike is predicated on – concerns what prisoners refer to as “prison slavery.” When incarcerated, prisoners are made to work labor intensive jobs that can range from maintenance work to kitchen duty. Wages for these common types of prison work range from $0 to $2 an hour, according to a 2017 analysis of limited data on prison wages by the Prison Policy Initiative. One of the most controversial aspects of this issue is that, while prison labor has been said to be a rehabilitation method, it is also a significant way for the government to make money. There even happen to be a number of states with no pay at all for some prison jobs, such as Alabama, Arkansas, Florida, Georgia, Mississippi, South Carolina and Texas.

“It’s so unfortunate that these prisoners have to work for such unlivable wages, but who has really fought for their rights? They have come out to fight themselves, but as prisoners it’s incredibly difficult to organize such a movement, when you spend your days locked in a cell. Personally, I think as citizens we have to turn words into action, because speaking out about social issues like minimum wage applies to everyone. It isn’t meant to be for just those on the outside, and just like we deserve a livable minimum wage, so do they. Being in prison doesn’t make them any less deserving, and their situation is being taken advantage of,” says Robin-Sailor Zander (‘19).

According to the Prison Policy Initiative, wages for prisoners have actually declined since 2001. The average of the minimum daily wages paid to incarcerated workers for non-industry prison jobs has decreased from the reported 93 cents in 2001, to 86 cents today.

“When it comes to prison wages, yes, they are extremely low compared to our minimum wage. You have to realize though, that these people were placed in prison because they committed crimes. Also, while in prison, they don’t have to pay for food and housing. Therefore, the money that prisoners make are just to have when they are released. So for these reasons, I feel that it is reasonable to pay prisoners under minimum wage but the current wages of prisoners should be raised.” says Caitlin Asher (‘19).

Similarly, there is an emphasis surrounding the issue of the disenfranchisement of ex-felons, especially here in Florida. States vary in their restrictions regarding ex-felons’ voting rights. Some automatically restore voting rights once the person in question has been released from prison, while others require the individual to complete probation and parole as well. However, there are four states ― Iowa, Kentucky, Florida and Virginia ― which prohibit voting permanently, barring an appeal to the governor of the state. This issue is being addressed on Florida’s November ballot, allowing the people of the state to reinstate the automatic supply of voting rights to ex-felons.

“Looking at the ability of governor’s, such as Rick Scott, to make the sole decision regarding whether or not a person regains the ability to vote, I think it’s completely unjust and unfair. I think it’s something that should be decided by the judicial system, whether it be on the state or federal level. I don’t think that it should be the people that we elect who get to decide something like that. At the end of the day, that’s your legal right as a citizen. Even though that right gets taken away when you commit a crime, if you’ve done your time and given your dues you deserve the chance to go before a judicial committee and try and earn your rights back,” said Carly Finley (‘19).

Many prison strikes transpire without much fruitfulness in the way of demands being recognized. Taking this into consideration, there is a very likely possibility that the strike does not have much of an effect in terms of policies, according to Lauren-Brooke Eisen, a mass incarceration expert. However, Eisen also claims that this strike may be the largest the country has ever seen, and that, in itself, is fairly significant.