How People Form Their Political Ideologies 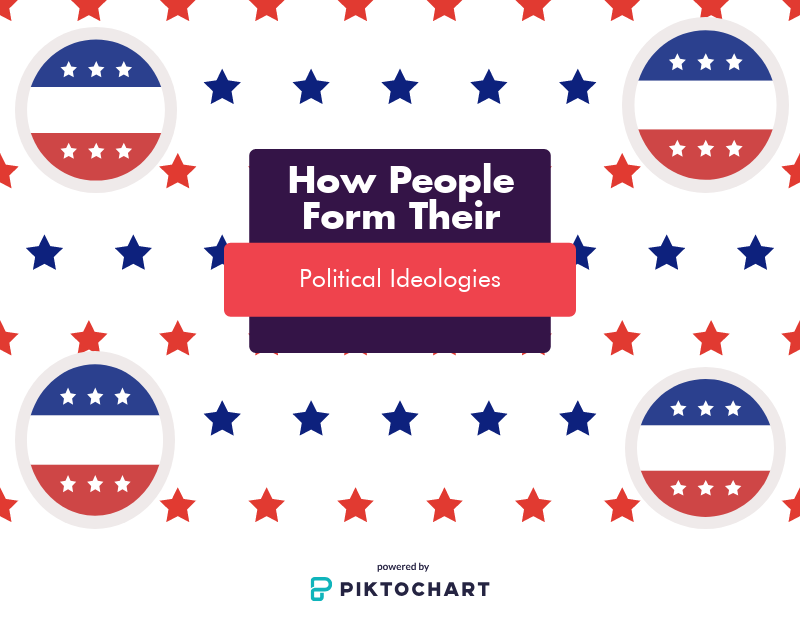 According to a study conducted in 2017 by the Pew Research Center, 37% of registered voters identified as independents, 33% as Democrats and 26% as Republicans.

On November 6, 2018, citizens from all across the country will be casting their vote for the 2018 midterm elections. Consequently, the political atmosphere within the country has become stark, eliciting responses from those all across the political spectrum. This can be seen in the recent surge of what Democrats have coined the “blue wave” movement, along with the Republican efforts to maintain power and stability in respect to their party’s influence. In light of this recent polarization in regards to politics, it brings up the question of how individuals go about forming their political ideologies.

When looking at trends involving the way in which large groups of individuals come to shape their political identification, it is first and foremost important to remember that not everyone strictly adheres to these stereotypes. Though much research may say that this is the way a certain demographic may vote or this is how most people form political opinions, the outcomes for each individual are not necessarily predicted because not everyone is going to fall into this established category. With that being said, there has been much research into what factors tend to affect how individuals vote, and there is truth in these findings.

The process by which individuals go about forming public opinion is called “political socialization”, and the main overarching factors that are said to come into play, at various levels of intensity, are family, media, peers, education, religion, faith, race, gender, age, and geography. Certain demographics of people tend to have particular voting trends, for example women are far more likely to associate themselves with the Democratic Party than men, with 56% of registered women voters being Democrat affiliated as opposed to 44% of men.

One of the largest political influences in a person’s life involves their family’s political opinions and discussion which they were surrounded by growing up. Despite conceptions about age gaps and generation differences, children tend to grow and vote according to their parents.

“My parents have always placed a really large influence on Republican ideals and because of that I still identify as Republican today. I think that those are the ideals that much up the most with how I grew up and subsequently how I think as an individual,” Sarah Munera (‘20).

However, many of these opinions tend to be most prevalent in people’s younger years when they are more susceptible to influence, many children grow away from their parents political beliefs, but in this case they are usually not the opposite of their parents, instead falling more moderate.

“My parents are die-hard Republicans, but personally I don’t lean towards one way or another. I would vote for the people that I share the most values with and who I think would be the best candidate. When I was first developing a political opinion, I was definitely a lot more Republican leaning. However, as I grew more educated on issues through school and the internet, I started to see the flaws in both parties, causing me to fall more in the middle,” says Riley Kayton (‘19)

Children whose parents discuss politics frequently and encourage the expression of strong opinions, are more likely to become politically active adults as opposed to those in families where politics does not play a significant role.

Youth who grew up in a household with a clear allegiance to the GOP or the Democratic Party are more likely to say they will vote than those who grew up in homes without a clear political affiliation.

“My parents are actually both independent so it’s been different in my life because there’s never been a particularly strong pressure to be super political in any way since they themselves don’t lean one way or the other. Because of this I’m not super political and I’m not really particularly partisan, I fall on that same spectrum as my parents since there was no emphasis on forming one exact ideology,” says Rachel Porter (‘19).

Though family plays a big part in how someone identifies politically, there are many other factors which alter this over the course of a person’s life. One aspect of today’s society which has gained more and more impact on how children form their opinions is the use of social media. There are two prominent social media platforms which have significant political influence, Facebook and Twitter. They provide vast amounts of political information, from news on politics to political campaigns, and even sparking many political discussions amongst the younger generation.

You bought a lottery ticket huh? Rushed out there and grabbed one in hopes it could make your life better? Even though your one ticket might not win, you did it anyway cause it’s worth a shot, right?

So did you vote?

“My family is really conservative, and I was definitely staunchly conservative growing up because of it, but at one time I actually flipped completely in terms of that belief because I was then staunchly liberal for awhile. A lot of this had to do with my use of social media, especially tumblr and twitter because those platforms are very prominent in terms of liberal politics. But now I tend to see things from both sides since I’m starting to incorporate a little bit of both of those influences into how I affiliate myself,” says Adriana Seise (‘21).

Education also plays a large role in political identification because of the exposure it offers children to lots of different people from various backgrounds and ideals, while also educating them on issues they previously had no knowledge of.

“I’ve developed my political opinions so much more since being at Academy. Prior to it I never really gave it much thought, but coming here introduced to so many things I never really knew about. I went to the Student Diversity Leadership Council (SDLC), something I never would have been exposed to had I not gone to Academy, and being there just helped me see so many issues that I realized I do have an opinion on like civil rights injustices. It definitely helped me develop into a more liberal person. That and the various convocations we’ve had that have informed us on issues like white privilege and such, that definitely has affected me,” says Casey Martin (‘20).

Some individuals believe that one of the most important influences on the formation of political beliefs is religion. Certain religions vote in patterns due to the ideals of those particular religions. White evangelical Protestants remain one of the most reliably Republican groups of voters, 77% of white evangelical voters lean toward or identify with the Republican Party, while only 18% are Democrat leaning. Catholic voters are roughly evenly split between the share who identify with or lean to the Republican (46%) and Democratic (47%) parties. Jewish voters tend identify with the Democratic Party, averaging at about 67% of all Jewish voters are Democrats, with 31% being Republican.

“I don’t really take into account what my parents’ political opinions are because mine stem from how I was raised in regards to religion. As a Catholic, I have used those ideals and morals I’ve been taught to develop how I think politically,” Amelia Lum (‘21).