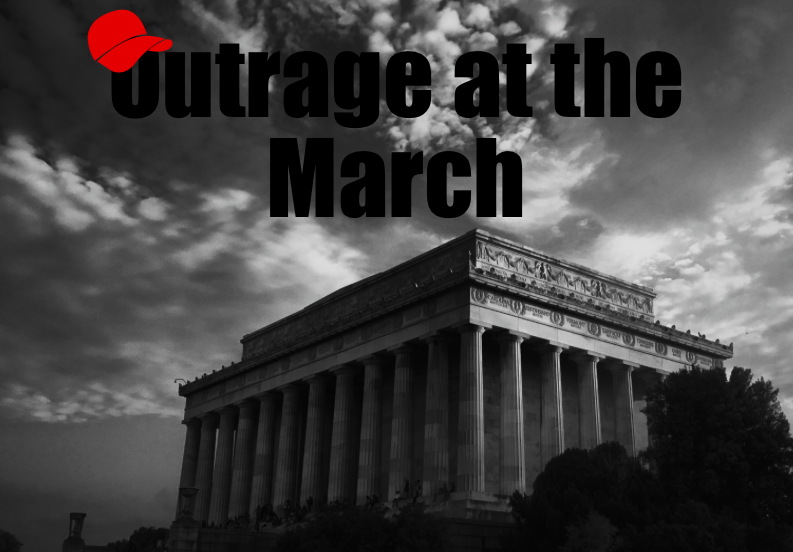 This year, over 100,000 people marched at the March for Life in Washington D.C. ((Photo Credit: Jaclyn McCauley/Achona Online/Piktochart))

This year, over 100,000 people marched at the March for Life in Washington D.C.

Outrage Sparks at March for Life

On January 18, a video of a white teenage boy and a Native American elder surfaced on the internet. The video showed the boy, Nick Sandmann, harassing the elder, Nathan Phillips. The item in this video that drew the most attention was the “Make America Great Again” hat that Sandmann was wearing with his fellow Covington Catholic High School classmates. People around the country quickly took sides on this matter.

This encounter took place in front of the Lincoln Memorial while the March for Life was occurring. Video footage shows the group of students chanting at a group of Black Hebrew Israelites who were yelling slurs in their direction.

When the video was first seen on Twitter, it appeared that the students were the ones who approached the Native American elder that afternoon. The video showed the students smiling and mocking the elder while he was playing a drum and singing in his native language. People around the world condemned Sandmann for his racist actions.

If the hoodie conjures up white fears of violence, imagine how the #MAGA hat makes American people of color feel #BlavityOpEd https://t.co/2996q727Y0 pic.twitter.com/bHkzk3GfRK

Robin Sailor Zander (‘19) says, “He was being ignorant and Covington Catholic should be angered at his behavior. His actions do not represent the values and morals of the school. The Native American man was brave for how he rose above the ignorance.”

However, a few days after the first videos was released, other videos were also put out to the public. These new videos showed Phillips approaching the teenage boy. He began to sing and talk with the students. Many then said that the boys were defending themselves and had done nothing wrong. Sandmann came out with a statement expressing his feelings on the situation.

In an exclusive interview with NBC’s Savannah Guthrie, Nick Sandmann said he “had every right” to stand in front of Nathan Phillips, but now wishes he and his classmates “would have walked away and avoided the whole thing.” https://t.co/YH8Kvpya1W

Caitlyn Asher (‘19) says, “I believe that the elder was trying to start something bigger. Not reacting in a dramatic manner was probably the best thing that the students could have done in order stop the situation from progressing further.”

When the video of Phillips approaching Sandmann was released, other videos of the boys harassing and catcalling women were released. While Sandmann was not one of the students to do this, many of his other classmates were all seen in this video.

Summer Wolf (‘19) says, “The boys who were harassing the women were acting in an offensive way because of the things they were saying to her. However, I know that there were also videos of other groups of people threatening the boys. It was all around a bad situation.”

This event helps to show that a person’s social, cultural, and ethnic background can all play a part in how they perceive a certain situation. Many different groups of people have had different views on this controversial video.

People of color around the country saw Sandmann’s smile in the first video and took offense to it. They believed that it was a way of mocking the Native American elder.

Hira Khan (’19) says, “His blatant violation of any personal space alongside his knowingly entitled and malicious facial expression was not only an insult to all people of color, specifically Native Americans, but was the quintessential personification of hate and bigotry in America.”

On the other hand, people who grew up in majority white middle-class neighborhoods do not see much of a problem. They believe that the students have done nothing wrong and are being portrayed in a bad light.

Wolf says, “Personally, I didn’t think the smirk was meant in a malicious way, but I can understand how some people might believe that it was done to mock the man.”

Hannah Bruty (’21) says, “Political bias has quite an effect on our opinions. I think that sometimes people don’t even understand the real issue. They just want to find something to argue about. As a society, we need to stop blaming others and think before we express our opinion.”