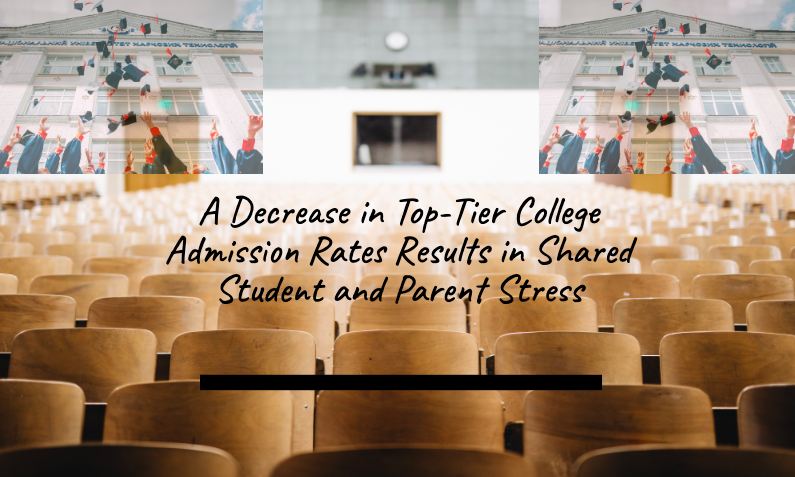 Megan DeVaney (‘19) said, “I applied to UGA [University of Georgia] early-action, so then I got deferred in November, and then I was sad about it. I didn’t even want to go there, but the fact that they were just like ‘no’ made me upset. Then on April 1, they re-accepted me into the school, but it was a little too late. I’m already going somewhere else [the University of Florida]. April 1 is a really late date to hear back from colleges because I was already committed to UF by the time I heard back [from UGA]. I think it’s [the fact that it is getting increasingly difficult to get into top schools] discouraging for a lot of people because a lot of people work really hard in high school with the assumption that they’re going to get into these major schools, and then when they don’t, I think it hurts even worse because it’s like a lot of your effort went nowhere.”

It is getting increasingly difficult to be admitted into top colleges, even beyond the ivy leagues—although they are within this category. Universities revealed, during the last week of March, there was a record number of applicants and a (low) record number of admission rates. For instance, UChicago’s Class of 2023 acceptance rate decreased to an all-time low of 5.9%. For the Class of 2022, it’s acceptance rate was 1.3% higher, at 7.2%.

College Counselor Kerry Keegan said, “In most cases [the last day to hear back from colleges was April 1], but there are students who’ve been waitlisted who will hear back after April 1 if they get off the waitlist. They technically do have until April 15 because students don’t have to commit to any schools until May 1. We haven’t heard back from all the students [about the schools they were admitted to], so we don’t know in other words. If the students haven’t come back to tell us, we don’t know yet. We’ll know by graduation because we have to put everything in the Honors Convocation brochure, but we don’t have those statistics yet.”

These admission rates, ironically, coincide with the college cheating scandal as these frightening numbers were motivating factors for parents to bribe athletic coaches and others to have their children admitted into top-tier colleges.

I’m in denial about this too! Do U really think Lori Loughlin will serve any jail time? She’s rich! She’s gonna buy her way out this! https://t.co/28VLFBWl5G #FelicityHuffman #CollegeCheatingScandal

Charli Young (‘19) said, “I feel like for the top colleges, it’s not even how smart you are, it’s how much money you have because your parents can afford to get you into that school. It is a division of social class. Maybe I am the top of my class and valedictorian, but my parents can’t afford to send me to Harvard. Then, I’m not going to go, and I’m going to go to UF. That’s never going to go away. It’s never going to change completely.”

People really need to get away from caring about the label, the name recognition, and find the school that’s the right fit and match for them.”

Kate Sweeney (‘19), who is attending FSU (Florida State University), said, “I think you should only apply to what [college] you really want to go to. Also, it’s a waste of money for your parents because the applications are expensive, so if you apply smartly, you’ll be able to not pay that much for applications, and you’ll be able to go to where you want to go. I applied to UCF [University of Central Florida], FSU, and UF. It’s [the college admissions process] definitely intimidating when you’re applying to difficult schools with a lower rate of acceptance, so UF and FSU are pretty competitive schools in Florida. So, I was very nervous about getting accepted to either because of how big the application pool is, and there is a lower chance of you getting in.”

Consequently, the stress caused by yearning to be admitted into top colleges result in higher rates of depression and anxiety during high school. High school years may comprise of solely a student’s goal to acquire all the extracurriculars and excellent grades, for example, Yale and Harvard look for. However, once their, students are burnt out, wondering what the hard work was all for.

DeVaney comments on the difference in education between the Ivy Leagues and, for example, UF: “Getting that degree [from an Ivy League] is a lot more valuable than, lets say, a UF degree, but if you’re going to UF for free and you’re not in that student debt, essentially I think it balances out in the end because those people who are getting higher paying jobs [because of] Ivy Leagues are still paying back their student debts when [in contrast] I’m out debt free with maybe a lower paying job. I think college is really what you make out of it. I don’t really think it matters what the name of the school is, so long as you go in with the mindset that you want to do well, I think anyone can do equally well anywhere they go if you put in that effort.”

Because of the low percentage of students admitted into certain colleges, students and parents assume other colleges are less academically capable because they accept a higher rate of students and are not as high on the prestigious or “status” ladder.

Keegan explains the common misconception of “selectivity” in the following audio.

While top-tier college acceptance rates have increased, the average college admissions rate is above 50%.

So, what is the point? Do not limit your options or become anxious because of statistics and percentages.

“My advice to students: Be true to who you are. Find what you love and what you don’t enjoy. Try new things and explore. Don’t do something because it looks good on your resume, but do it because it brings your life meaning and purpose. Talk to people and make connections. Shadow different career professionals. Remember to breathe! College is important, but so are you. Don’t lose yourself in the process. And lastly, remember that God made uniquely made you, but made you in His image and likeness. You are not supposed to be everyone else, you are supposed to be yourself.

My advice to parents: Support your children as you always do. Be there for them. Listen to their needs and wants as it pertains to anything in their life, but also as it pertains to college. Know that your child is different from any other child in the world and God made them unique. They will be successful not because of their GPA or what clubs they were involved in, but because of the way they live their life. Because of the strong, young women that you raised them to be.”