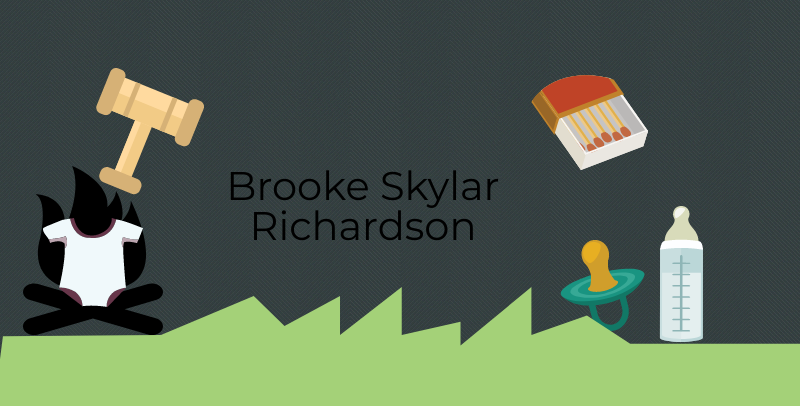 Brooke Skylar Richardson, an ex-cheerleader senior in Ohio, was charged for allegedly killing and disposing of her daughter’s body. She was sentenced to three years of basic supervision. (Photo Credit: Sawyer Salgado/ Piktochart)

Brooke Skylar Richardson, an ex-cheerleader senior in Ohio, was charged for allegedly killing and disposing of her daughter’s body. She was sentenced to three years of basic supervision.

Brooke Skylar Richardson, the 18-year old who gave birth to her stillborn daughter, Annabelle, and then allegedly burned and buried her body in the backyard. The details about how she got to the point of disposing of her daughter were vague. Her defendants said she never had any prenatal care or future plans to raise baby she had alone in her house in May 2017. Richardson’s defense team also claimed that Annabelle was a stillborn, and that Richardson reacted appropriately by burying her daughter in the backyard near a barbecue pit.

Her trial has been going on for two years. Her multiple charges of aggravated murder, involuntary murder, child endangerment led her to be not guilty by the jury. The only thing she was found guilty of was abuse of a corpse, which is considered one of the lowest categories of felonies. She was charged with three years of basic supervision, without serving a day in jail, and getting bond for $50,000.Her defense lawyers plead for sympathy because she struggled with an eating disorder, and was only 98 pounds at the time of her pregnancy.

Christi Carotenuto (‘22) said, “I think 100% of what she did was wrong and that she should have had a substantial consequence for her actions. Instead of just getting a $50,000 bond.”

CNN and Fox News describe her as “An Ohio Woman” and “ An Ex-Cheerleader”. Although Richardson was eighteen at the time, her headline in the NBC News  was “Ohio ex-cheerleader,” instead of saying her name first. This detail takes away from her original crime in the hopes to have the public empathize with her story.

Julie Bolling (‘21) said, “While reading over an article on it, I saw that the judge said he was restricted by the law and couldn’t’ make the sentencing he wanted to make. So I’m not sure if it’s as much privilege as much as restriction of the law that gave Brooke Richardson a lenient sentence. I believe the judge would have given her a worse sentence if it weren’t for his limitations. It seems he wanted to sentence her for more time, but he couldn’t. The judge clearly believes that, “life is precious” and wanted to show this to Brooke, but was sadly unable to.”

The same treatment is not applicable with African Americans. In crime headlines with an African American, the first words are, “A black man/woman is arrested.” Society judges them based off what is seen first. Statistically, African Americans normally get longer sentences than any other race. According to the NAACP, African Americans are arrested and sentenced to a crime more than three times than a white person. The race factor in sentencing African American juveniles to life without parole and tried as an adult, are increasing as well.

Raquelle Elson (’23) said, “Why didn’t they put her in jail? There are a lot of people that have done crimes less serious and were put in jail for a long time for tedious crimes.”

While Black mothers are sent to prison for enrolling their children in better school districts….Brooke Skylar Richardson, who killed and buried her unwanted newborn in her backyard days after her senior prom so that she could keep her "perfect life" was acquitted of murder. pic.twitter.com/eXriacIN1Y