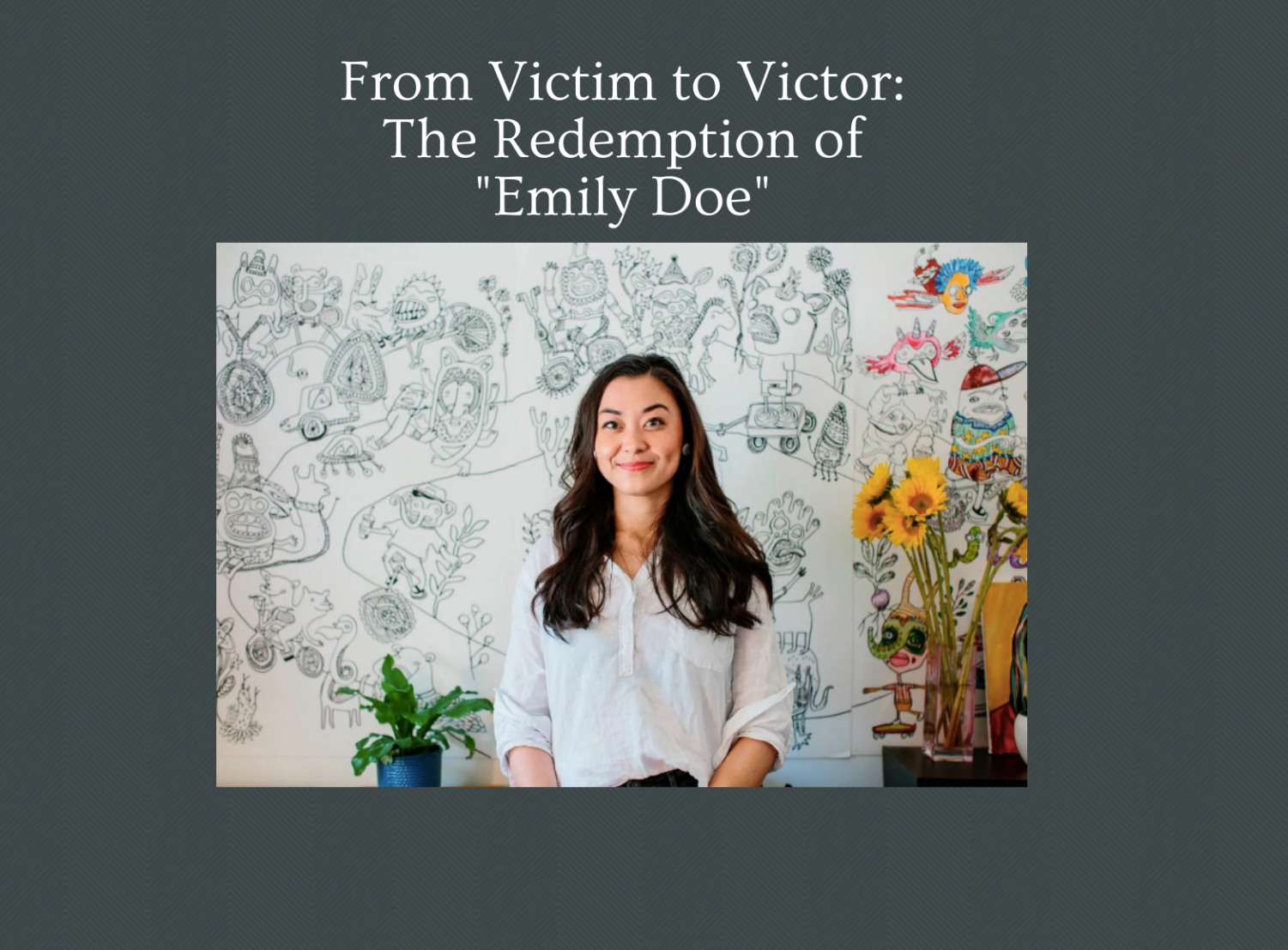 From Victim to Victor: The Redemption of “Emily Doe”

The infamous People v. Turner case of 2015 took the nation by storm after star Stanford swimmer, Brock Turner, was accused and found guilty for the rape of a fellow Stanford student.

Turner was seen under two witness accounts sexually assaulting a 22-year-old woman behind a dumpster while she was unconscious and intoxicated. Turner pleaded not guilty for all five of his charges (two counts for rape, two for felony sexual assault, one for attempted rape). Turner was later found guilty in March of 2016, potentially facing up to 14 years in federal prison. However, state prosecutors recommended six years in Santa Clara county jail.

Dorothy Pickard (‘20) said, “As a strong believer in justice being served to those deserving of punishment, I feel that Brock Turner’s consequence was nowhere near what it should have been. I think that he should have served far more time than what he was sentenced.”

On June 2, 2016, Turner was sentenced to six months in county jail along with three years of probation by Santa Clara Superior Court Justice, Aaron Persky. Turner served three of his six month sentence before being released for “good behavior” and claiming that “a prison sentence would have a severe impact on him”, as described by Judge Persky. Tuner has since had to register as a sex offender as well as participate in a state approved course for sex offenders.

Turner’s brief punishment served to him by the hands of the Santa Barbara County judge disappointed and infuriated thousands.

So now he is out, how long before @GOP move to recruit him, put him straight onto a fast track for the next Supreme Court vacancy

Brock Turner released from jail after serving half of six-month sentence https://t.co/eYcFANbhzE

Turner’s repercussions, which were described as “a mere slap on the wrist” incited a sense of fear in people, particularly women, across the country. After major backlash across the nation for his leniency on the accused, Judge Persky was voted out of office, making him the first California judge in over 80 years to be recalled.

On September 4, 2019, the case’s victim revealed her identity for the first time. Chanel Miller, previously known to the public as “Emily Doe”, appeared on a 60 minutes interview preview which is set to air in late September. Miller also plans to release her memoir “Know My Name” on September 24, where she discusses the encounter, the trial, and her ongoing healing process.

Chanel Miller, who was sexually assaulted by former Stanford student Brock Turner (who served only 3 months in jail after his conviction), was known as Emily Doe in the case. Now she wants the world to "know my name." https://t.co/UOWvAhYFCz

For months, viewers and followers of the case had only been fed one version of the story; the version where, once again, white male privilege prevails against all odds. Where innocence still remains even after guilt is proven. Corruption in the country’s justice system was beginning to make itself known due to the recurring theme of sheer wrongdoing being placed on the back burner, as well as crimes against people of color not being fought equally. Not only had the public not been able to take into account the victim’s story from that night on January 17, 2015, they still were not aware of her real name, until now.

Miller explained that her book started as a way of coping with the case’s aftermath, according to the New York Times. By writing down everything she had experienced before, during, and after the trial, Miller was able to maintain a sense of control where she was believed to have had none. Beginning her project in 2017, Miller has now written enough material to publish her first book in hopes of finally sharing her long awaited story with the world. She also hopes to reach out to victims and their families who have endured similar events through her book to acknowledge and ensure that no one fights alone.

Ava Oliva (‘20) said, “As young women preparing to go away to college, we each should know that situations like Chanel’s are a very possible and terrifying reality that we all have a chance of facing. I think that Chanel’s story of perseverance and strength is something that all girls here at Academy can look up to and apply in every aspect of their lives. It shows that by using your hardships as motivation, redemption is always within reach.”