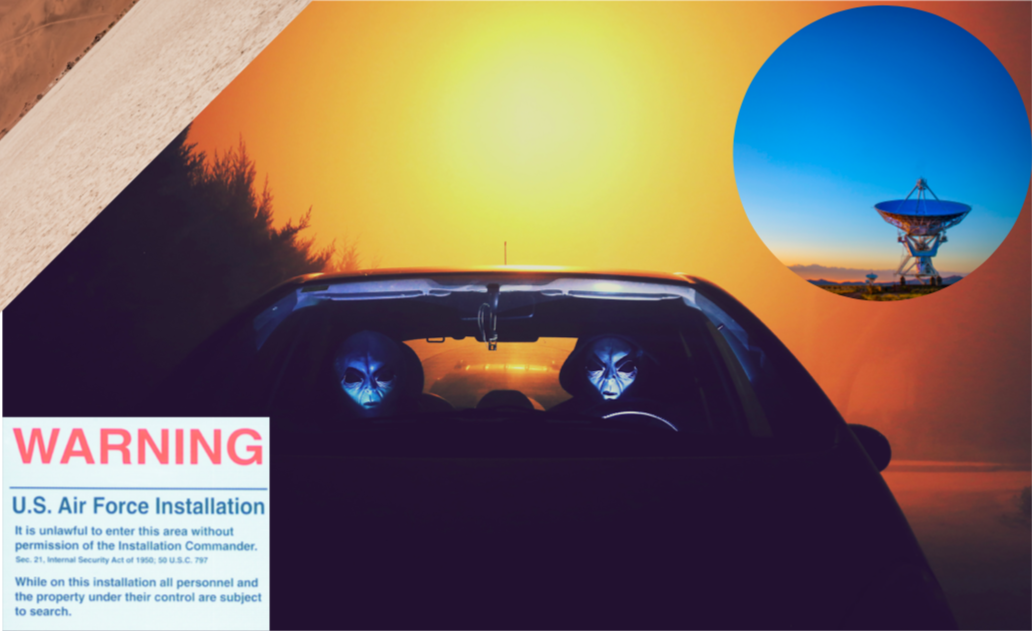 Millions signed up to raid Area 51. However, did anyone actually attend? Did they ‘see them aliens’? (Photo Credit: Reagan Finch/Achona Online/Piktochart)

Millions signed up to raid Area 51. However, did anyone actually attend? Did they ‘see them aliens’?

What actually happened at the ‘Area 51 Raid’?

Months of media coverage, memes, and preparation led up to what happened on Sept. 20 in the small town of Rachel, Nevada. Millions planned to attend. It was an event that sent social media into a frenzy. However, all the hype fell flat on its face when only 150 people showed up to ‘raid Area 51’.

Area 51 is a military base is Rachel, Nevada. The town of Rachel has a population of just 54. The base has been subject to numerous conspiracies of extraterrestrial life, due to how secretive it is. The government didn’t acknowledge its existence until 2013. One of the most common conspiracies is that a UFO that crashed in New Mexico in 1947 is held in Area 51.

“I do think that aliens exist. However, I don’t think there are any in Area 51. If there were, I feel that more substantial evidence would have come out by now,” said Biology teacher Raymond Rodriguez.

On Jun. 27, college student Matty Roberts created a Facebook event named “Storm Area 51: They Can’t Stop All Of Us”. The event was initially created as a joke, but after receiving mass attention on social media, became a real event. The plan was to infiltrate the base at 3:00 AM on Sept. 20. The event received nearly 40,000 “Going” responses and 25,000 “Interested” responses.

“We will all meet up at the Area 51 Alien Center tourist attraction and coordinate out entry. If we Naruto run, we can move faster than their bullets. Let’s see them aliens,” read the description of the event.

Once the raid gained internet traction, it sent social media into a frenzy. Every social media platform, from Reddit to Tik Tok, had memes about Area 51. By Aug. 22, responses to the effect nearly doubled, nearly 2 million “Going” and 1.5 million “Interested”. Companies began to use the raid as a marketing strategy. Brands such as Arby’s, Funyuns, and Oreo all tweeted about the raid.

“I think the media changed the tone of the reaction to the raid. Everyone knew it was a joke, but due to how many people were talking and sharing about it, people were taking it seriously. It’s crazy how much media can impact a situation,” said Sophia Garcia (‘22).

Soon after all the media attention, Roberts announced plans to organize a music festival that would take place at the military base. And thus, “Alienstock” was born. The festival had acts such as Boots Electric, Wily Savage, The Weird Kids, and Brothers of Alien Rock. There was even a petition to have Lil Nas X, singer of Old Town Road perform. Thousands were set to attend. The event, however, was canceled due to the threat of a possible humanitarian crisis.

“Due to the lack of infrastructure, poor planning, risk management and blatant disregard for the safety of the expected 10,000+ AlienStock attendees, we decided to pull the plug on the festival,” Roberts announced via the AlienStock website.

On Aug. 19, commissioners in Lincoln County unanimously voted to sign an emergency declaration, which allows the state to supply resources if a rural county needs help with the expected thousands coming. Due to how small the town is, officials were worried cell towers would crash due to the amount of traffic. The Air Force were adamant; do not come to Area 51.

“[Area 51] is an open training range for the U.S. Air Force, and we would discourage anyone from trying to come into the area where we train American armed forces,” a spokeswoman told The Washington Post. “The U.S. Air Force always stands ready to protect America and its assets.”

On Sept. 20, at 3:00 AM, 150 people arrived at the gates of Area 51, ready to raid the base. They brought signs and wore tin foil hats. However, no one actually ‘raided’ the gates of Area 51. Two people were detained for sticking their feet under the gate, and one man was arrested for urinating near the entrance.

This is the worst thing I’ve ever seen. Look at these grown men fake breaking in to Area 51. Grandparent cry pic.twitter.com/QRLlxJhr7k

The raid on Sept. 20 provided no answers as to what is behind the gates of Area 51.  However, it shows the impact the internet has on our reality.

I think that it is difficult for people misinterpret whether something is a joke or not on social media,” said Christina Burchett (’22). “there’s no accurate way to tell exactly what people mean, which leaves room for misinterpretation.”