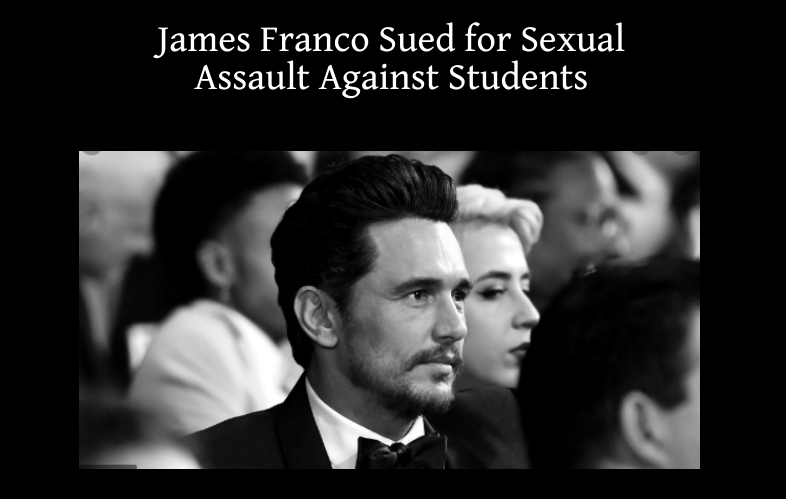 A-List actor James Franco has recently been sued by two former students for sexual assault allegations and has since led to the speaking out of his past victims. (Photo Credit: Georgia Ruffolo/Achona Online)

A-List actor James Franco has recently been sued by two former students for sexual assault allegations and has since led to the speaking out of his past victims. (Photo Credit: Georgia Ruffolo/Achona Online)

Two former female students, Toni Gaal and Sarah Tither-Kaplan, have recently sued renowned actor James Franco for sexual assault while attending his acting school Studio 4. Allegations against Franco first surfaced in January of 2018 and have since led to a long list of women speaking out against his actions.

The suit accuses Franco of “engaging in widespread inappropriate and sexually charged behavior” while partaking in the $750 “Master Class: Sex Scenes”, personally taught by Franco himself. According to the students, Franco promised roles in feature film productions in exchange for nude scenes, explicit photography  and “practicing sexual intercourse both on and off camera,” as said by Toni Gaal. They’re also suing RabbitBandini Productions, the school’s co-owner, Vince Jolivette, and its general manager, Jay Davis.

Tessa Ricco (‘20) said, “What Franco did was repulsive considering that he had the audacity to speak as part of the “MeToo” movement. This situation shows the corruption of Hollywood and how celebrities will do anything and everything to please the public for their own benefit.”

Scarlett Johansson was calling out James Franco in her #WomensMarch2018 speech: "How could a person publicly stand by an organization that helps to provide support for victims of sexual assault while privately preying on people who have no power?" https://t.co/Q9kZYtP3aq pic.twitter.com/zBaRQPfYZg

During the 2018 Golden Globes, Franco spoke out against the Harvey Weinstein scandal and other sexual harassment cases while proudly bearing a “Time’sUp” pin upon his chest. This ironic situation received backlash from at least five women who went on to accuse Franco of his own sexual misconduct against them. However, these women’s complaints were swept under the rug as lawyers found there to be “no witness accounts of any sexual misconduct”.

A common thread amongst all of Franco’s victims was the initial feeling of safety in his company. That he, although he is a credible and very famous actor, did everything in his power to “make his students feel comfortable” and as equals rather than inferiors, according to Tither-Kaplan. However, it has been revealed that his comfort and charisma was a ploy, as he used this to take advantage of young women such as Gaal and Tither-Kaplan. Co-star Busy Phillips, who starred in the late nineties hit TV show “Freaks and Geeks” alongside Franco, also came out as a victim of Franco’s abusive and sexually motivated behavior.

Busy Phillips comes forward with shocking assault allegations against James Franco: “He threw me to the ground. Flat on my back. Wind knocked out of me.”https://t.co/5jO07klThA

Although people in the public eye tend to receive more attention for their wrongdoings against women, this charade of trust and comfort has embedded itself into the lives of high schoolers, as many teenage girls have fallen victim to very similar events. Many girls have reported that they were taken advantage of, betrayed, or mistreated by a trusted individual such as a friend or even a significant other. Blackmail and cyberbullying tend to become components in these high school affairs, which can be seen in the similar Amanda Todd case.

Stella Mele (‘21) said, “I’ve heard of many instances, in both high school and college, where guys will act a certain way to get what they want from a girl and then completely change themselves afterwards. I feel that as girls, we need to identify and become aware of predatory people like Franco for our own safety, since cases like this are becoming more and more frequent.”