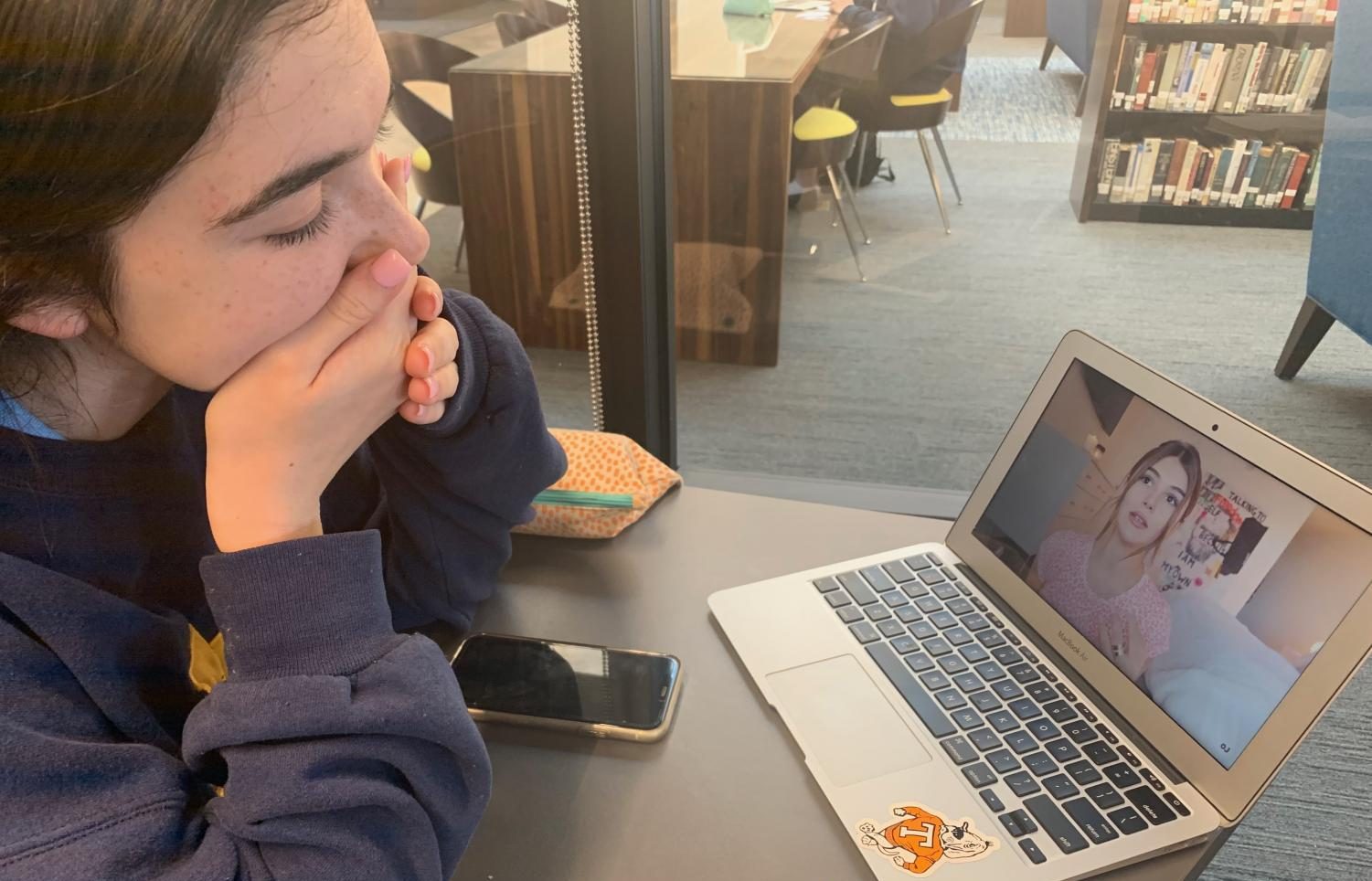 Photo Credits: Ella Castellano/Achona Online “I never really watched Olivia Jade but I watched her “hi again” video because I knew about the college scandal. It was interesting because i’m surprised she’s even coming back after all that,” said senior Caroline Jones

Photo Credits: Ella Castellano/Achona Online “I never really watched Olivia Jade but I watched her “hi again” video because I knew about the college scandal. It was interesting because i’m surprised she’s even coming back after all that,” said senior Caroline Jones

On Dec. 1, Olivia Jade Giannulli, daughter of actress Lori Loughlin and fashion designer Mossimo Giannulli, returned to Youtube for the first time in about 9 months since the college admissions scandal broke. The vlogger, prior to the scandal, was a Youtube star with around 2 million followers. She titled the video “hi again” and stated she was excited to return to vlogging, although she was terrified for many months to upload a new video.

“I was a big Olivia Jade fan, loved watching her vlogs and beauty videos. Once this scandal came out though I stopped watching her really because as a fan, I was disappointed,” said senior Amelia Traviesa.

In March of 2019,  Lori Loughlin and Mossimo Giannulli were accused of paying $500,000 to a fake charity in order to get their daughters, Isabella Rose Giannulli and Olivia Jade Giannuli, accepted to the University of Southern California as crew recruits — despite the fact neither had rowed in their life. They were only one part of this college-admissions scam though, dozens of high-profiled individuals were accused of bribery in order to get their children accepted to schools under false pretenses.

whys everyone commenting on olivia jade's video saying "we all make mistakes"??? hate when i accidentally give $500,000 for my kids to get into college

The Justice Department cited emails which prosecutors say show evidence of the Giannullis scheming how to get their daughters admitted to USC. To help their first daughter, Isabella, Loughlin and Giannulli  used a picture of their daughters indoor rowing machine. Along with this, Giannulli agreed to make a “significant contribution” to the schools athletics program. But, instead the documents say Mossomi Giannulli donated $200,000 to a fake non-profit called “Key Worldwide Foundation” in return for a receipt that falsely states “no goods or services were exchanged.” This process was also repeated for their second daughter, Olivia. According to documents, on an October 2018 call, Mossimo was told to say the donation was to a “foundation to help underserved kids.”

“I did not know much about Olivia Jade before the scandal. A lot of my friends watched her though and it was shown all over social media. I don’t know much about her or her family but was very surprised anyone would do that,” said junior Morgan Johnson.

YES my Olivia Jade notifications are STILL ON so I would not miss this day pic.twitter.com/6CUv9CpMys

When this scandal broke, Olivia Jade took a long social media hiatus. She was under a lot of criticism after releasing a video in August of 2018, saying, “I don’t know how much of school I’m gonna attend… I don’t really care about school, you guys all know.” The video, titled “hi again”, which she released last Sunday, is about two minutes long and in it she discusses how she is excited to start vlogging again. She also touches on the legal issues regarding her family, stating “I’m legally not allowed to speak on anything going on right now.” Giannulli tells her audience we should expect more uploaded content coming from her soon.