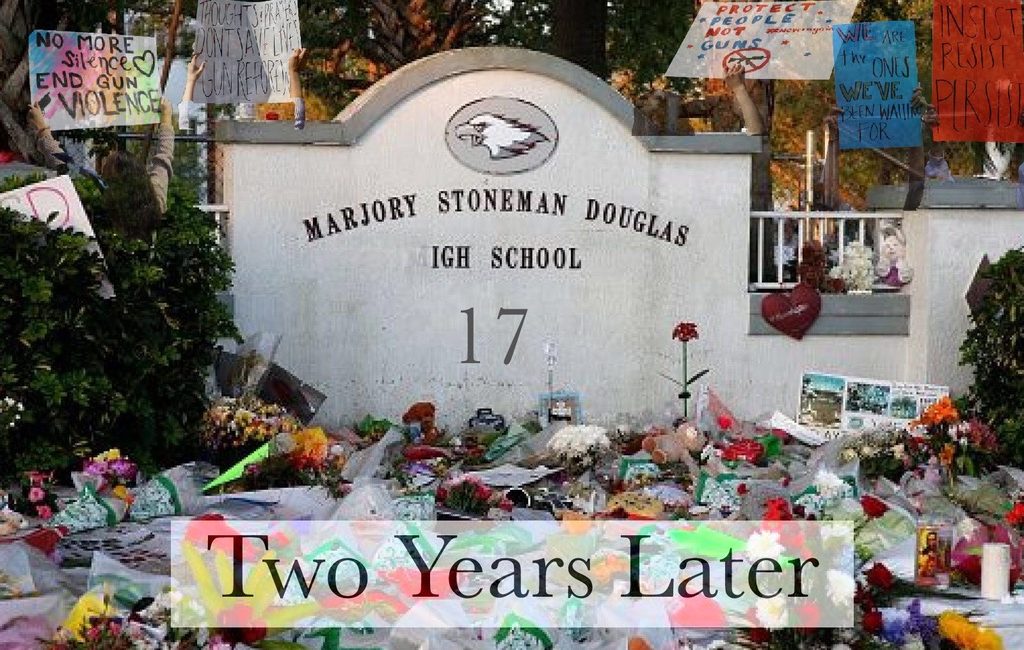 “No matter which point of view you look at, a shooting is an unbelievably terrible occurrence, but these circumstances start from and feed from unkindness and a lack of love. When I hear the expression ‘another shooting’ all I can think is that the world needs more love, more happiness,” said Kennedy Wilson (’20). ((Photo Credit: Casey Martin/Achona Online))

“No matter which point of view you look at, a shooting is an unbelievably terrible occurrence, but these circumstances start from and feed from unkindness and a lack of love. When I hear the expression ‘another shooting’ all I can think is that the world needs more love, more happiness,” said Kennedy Wilson (’20).

February 14, 2020 marks the second year after 17 lives were lost at the mass shooting at Marjory Stoneman Douglas High School in Parkland Florida. The schools in the Broward area were released early for members of the community to hold events to remember the lives lost two years ago.

“I was only in 7th grade, but I remember being absolutely terrified by the news. Hearing what happened made me really sad and heartbroken. To this day I’m still a little shaken by the event,” said Amanda Chau (’23).

Communities in the Parkland and Coral Springs area held events to remember those killed in the shooting, including a moment of silence at 2:21 p.m. when the shooting began two years ago.

Someone placed dozens of #MSDStrong rocks, painted in the school’s colors, on the roadside guard rail posts near MSD High. Full coverage of the day’s events and reflections on @nbc6. #ParklandAnniversary pic.twitter.com/Oe5MZF7yYI

Following the shooting at Stoneman Douglas, much conversation about school shootings and gun laws entered the political atmosphere. Several pieces of legislation have been implemented since the shooting two years ago.

Our previous report with details on the bill → https://t.co/iWbR7VTeGW pic.twitter.com/UCz1mIXqln

Secondly, the federal government issued a nationwide ban on bump stocks, a firearm accessory that allows a semi-automatic gun to shoot as fast as an illegal machine gun. The ban was put into effect on March 26, 2019 and required owners to destroy or hand in any bump stocks they have.

According to Fast Company, a total of 11 states have passed laws in 2018 to restrict gun access to people connected to domestic violence. Also, eight states, plus the District of Columbia, have incorporated ways to “temporarily keep guns from dangerous or ‘at risk’ people.”

After the shooting, companies like Walmart also took initiative to reduce mass shootings in public places. In late 2019, Walmart announced that it would stop selling ammunition that can be used in military-style assault rifles. They also discourage customers from openly carrying guns in its stores after the mass shooting in El Paso in August 2019.

“I think that more companies and public places should take this initiative and obviously its not a solution but I feel like this is definitely a start to reducing gun violence. Like they say, Rome wasn’t built in a day,” said Tress Jacobs (’20).

Campaigns such as March for Our Lives were created after the shooting to raise awareness and call for action against gun violence. Students, teachers, and families across the nation marched hoping to increase gun control and remember the victims.

A post shared by March For Our Lives (@marchforourlives)

Similarly, organizations such as the Sandy Hook Promise has increased their efforts to protect students from gun violence and encouraging safer home and school communities. In late 2019, The Sandy Hook Promise released a PSA to raise awareness on prevention of school shootings called “Back-to-School Essentials”.

Although several organizations and individuals have made efforts for gun control, many feel as though there is still much work to do. Bob Gualtieri, the chairman of the Marjory Stoneman Douglas High School Public Safety Commission, says schools were not prepared enough for situations like the Parkland shooting. Gualtieri also mentioned the idea that schools and legislators must extend the safety measures in place in order to prevent and handle school shootings.

“I think there’s so much work to be done with raising awareness and discussing the prevalence of gun violence in America because it affects a lot of minorities and innocent people. It’s been proven effective to instate gun regulations in other countries and I don’t understand why it’s taken us so long when there were more mass shootings than days last year,” said Claire Rogan (’20).

After two years, we still remember the lives lost at the Stoneman Douglas High School shooting: