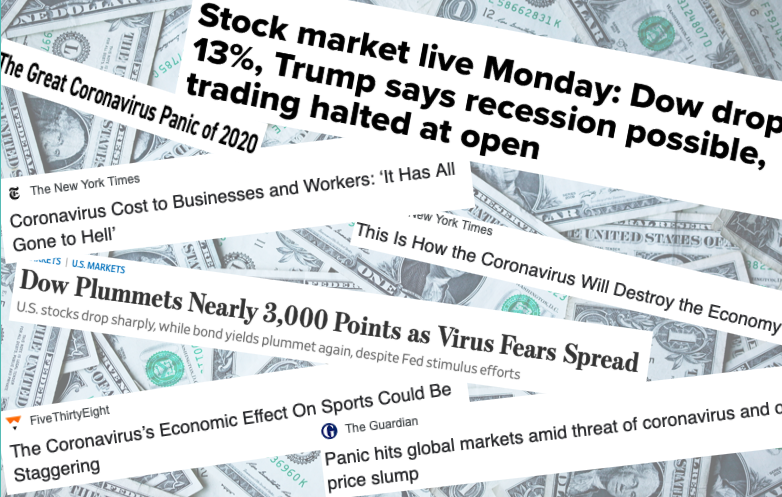 The coronavirus has had far-reaching effects on every aspect of the global economy, and the situation is expected to worsen as the pandemic spreads. (Photo Credit: Emara Saez/ Achona Online/ Piktochart)

The coronavirus has had far-reaching effects on every aspect of the global economy, and the situation is expected to worsen as the pandemic spreads.

The spread of the COVID-19, or the coronavirus, has caused significant impacts on the global economy. The virus originated in Wuhan, China, and experts initially believed that the virus would only affect China on a macroeconomic level. However, this proved to be incorrect.

Global supply chains are breaking, borders rising within nation-states, stock exchanges are convulsing with fear, and recession looms over the global economy.

The coronavirus has disrupted world orderhttps://t.co/TTR3EyHclN

COVID-19 is causing disruptions for businesses of all sizes and poses a large risk to global economic stability. Businesses all around the globe have experienced shutdowns in production, slowdowns in sales, and reduced productivity due to social distancing. All of these factors combined have devastated the economy, and economists are concerned that the global economy is heading towards a recession.

“Obviously being in high school we’ve all experienced the social and educational effects of the virus, but because we’re students we haven’t necessarily experienced the economic impact of it firsthand. Even with my level of detachment though, I’ve been able to see the detrimental effect this will have on not only our economy, but economies around the world. With cancelled events comes lost profits, and with the hysteria comes fear of getting out and doing/buying things. Even though they’re thoughtless actions on our part, they’re going to play a big part in the future of so many world economies and their functionality,” said Asha Sneed (‘21).

On Sunday, Mar. 15, the US Federal Reserve cut interest rates to almost zero in an attempt to mitigate the economic effects of the coronavirus. The Trump administration also announced a $700 billion stimulus program to help keep business in the US afloat.

BREAKING: Federal Reserve slashes interest rates to ZERO in massive emergency intervention for the US economy

-Fed will buy $700 billion more bonds/MBS
-Rates will stay at 0 to 0.25% until FOMC “confident” in turnaround#coronavirus pic.twitter.com/z6I1lC4L2g

Although these government efforts sparked hope, they did not do much for the ever-decreasing stock market. On Tuesday, Mar. 17, the Dow Jones Industrial Average index closed 12.9% down, which was recorded as one of the worst falls in stock market history since 1987.

Oil prices have also decreased significantly as the world’s major producers failed to reach an agreement to reduce production to meet reduced demand. Price wars between the major producers are expected to continue decreasing oil prices and destabilizing the economy.

COVID-19 is also affecting industries beyond airlines, hotels, and amusement parks. More than half of American jobs are at risk because of the coronavirus. Those workers could expect to see layoffs, furloughs, fewer hours, or wage cuts. Because the US is in what is known as a “hiring freeze,” unemployed people may struggle to find jobs. As of Mar. 18, the Trump administration has yet to pass a $850 billion stimulus package to help workers and businesses deal with the economic repercussions of COVID-19. The aid package would include money for general stimulus, expanded loans for small businesses, and aid for the airline industry.

“Personally I haven’t felt the economic impact of the shutdowns first hand, but I know a lot of people whose lives are probably going to be severely affected by it. My boyfriend’s parents have each been working multiple jobs for over a year now and barely make enough to get by. With the shutdowns, both his parents have had to leave work—his mom worked at an elementary school, so she’ll be out of work for a while, and his dad has to work from home where they don’t allow overtime. Altogether they’ll be making less than a thousand dollars a month, and will probably have to move soon. I’m sure they’re not the only people in this exact situation, and I’m scared to see what other possibly worse situations will come from the government shutdowns,” said Maddie Glaum (‘21)

Though we have yet to see a virus-induced recession, economists expect that effects will only be magnified the longer that this continues. The direct effects of virus like COVID-19 on economic activity have never been seen before, and the effects we are seeing today are much different than of those observed in past recessions caused by diseases. The unprecedented nature of COVID-19 has caused devastating effects on the economy, and it is unclear how this will play out in the long run.